He Better Pull Out! 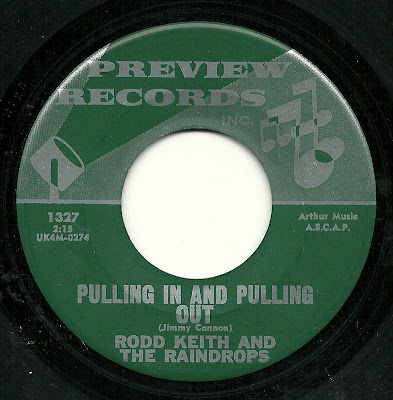 Since, by most accounts, my recent post of a Rodd Keith feature did not actually feature Rodd Keith on lead vocals, I thought I'd come back to him sooner than usual. And while the second half of today's record has been readily available for some time, I still thought this record was worthy of a feature, due to the previously overlooked A-side.

I'm not always a fan of Rodd's country stylings - I think he sometimes sounds like he's too obviously ridiculing the material - but on "Pulling Out and Pulling In", he has everything firing just about perfectly, starting with an unusually clever lyric, complete with punchline. Then Rodd attached that lyric to a perfectly suited arrangement, featuring a nice guitar solo, and effective give and take on the chorus with "The Raindrops". As nice as the flip side is, and despite that other song having been chosen for a compilation, I think this is the stronger of the two songs and performances.

The flip side is "Don't Throw My Love Away", which was featured on the wonderful "I Died Today" CD of several years ago. This one is in the 1960's adult pop wheelhouse, and wouldn't have been out of place in the repetoire of a Dionne Warwick or her contemporaries. Rarefied air, indeed, and I can recognize the depth of talent and style here, without really enjoying this as much as many others do - it's not really my thing.

Again, although it has been out there and available for ages now, I'm sharing it here for completeness sake, and for those who may not already have it: 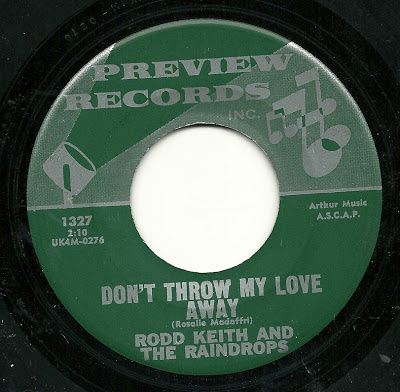 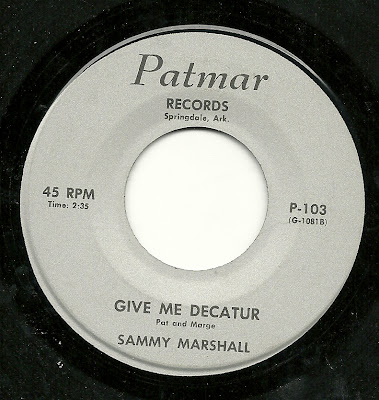 Today, we're going on a trip to Arkansas. I've been in 42 of the 50 states, by my count, and although I was only in Arkansas for part of a day, the land I saw there may be the most beautiful I've ever seen. Those behind this record, it appears, would heartily agree.

Here's a record on the previously undocumented Patmar records label out of Springdale, Arkansas. Springdale is in the Northwest corner of the state, about 30 miles from Decatur, Arkansas. While Springdale is a good sized city of roughly 70,000, Decatur, on the other hand, has well under 2000 residents.

I think we can reasonably guess that in one of these towns - I'm guessing Decatur, lived a couple named Pat and Marge, who threw their money into song-poem recordings as well as their own nearly eponymous record label, not even bothering to provide their last name on the songwriting credit! And for at least one side of their record, they turned to the Globe company, and stalwart Sammy Marshall, offering up a wish for those who hear him to "Give Me Decatur". Sammy gives it his typical upbeat, enthusiastic performance. By the way, the momentary fades you'll no doubt hear on this track are part of the original record, and not a flaw in the transfer to MP3:

On the flip side is a recording which might be a song-poem offering, or may be a commissioned performance by a local performer, or perhaps even a friend of Pat and Marge, someone named Les Anderson, nicknamed "Carrot Top" (and God help me, I hope this is the only circumstance under which I have to be entertained by someone with that nickname), along with a string band under the direction of Tex Atchison. I honestly don't know that this is a song-poem or some other animal, but I do know this: as mentioned above, I can fully understand the songwriters' point of view and love of their local land in their song "Beautiful Arkansas": 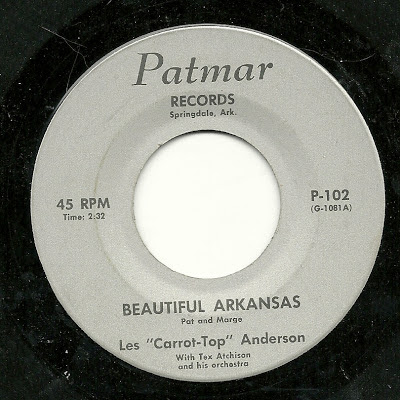 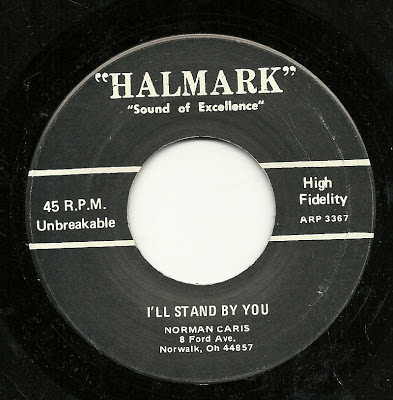 It's St. Valentine's Day! And I know that when we speak of love, and of song poems, there are those of you who love the Halmark label (and what better label to choose than one which is almost spelled like Hallmark, the company that bring us all of those holiday cards?).

Here's a Halmark special, featuring a superbly nasal performance - I think that's Jack Kim, but my recent singer identifications have been repeatedly called into question - on a love letter in song, titled "I'll Stand By You".
﻿


On the flip side, we have a female Halmark singer (whose name I don't know), singing over a backing track I don't remember hearing on a Halmark disk (a real rarity in itself), in an supremely boring religious number, "Where Shall I Go?": 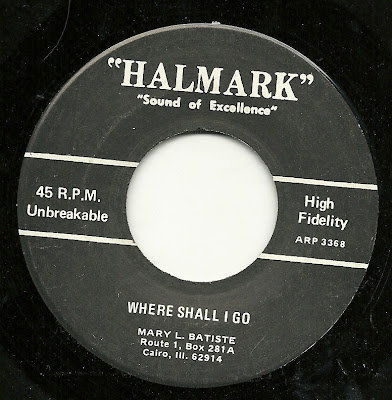 It's St. Valentine's Day! For those of you who love the Halmark label (and what better label to choose than one which misp
Posted by Bob Purse at 1:01 PM 4 comments:

That's Her Kissy Face - In Prison

Continuing last week's feature of songs sent to me from a long-time song-poem pal, I've got two songs from a Cinema release, featuring of course The Real Pros. As with last week's feature, because I'm getting these from outside of my collection, I don't have label scans.

The two songs contained on this record could hardly be more different. On the A-side, we've got a light-as-a-feather pop confection called "That's Her Kissy Face", featuring the unusual pairing of acoustic guitar and cheapo synth, over which the singer - who I think is Bobbi Blake - sings a wonderful sweet lyric about a mother's love for her young daughter. Despite the ridiculously low production values, it's a keeper!

On the flip side, we have Gene Marshall, emoting all over something called "Prison Blues", something of tone poem (a tone-song-poem?), with absolutely no beat or rhythm. Over outtakes from the Deep Purple/Iron Butterfly song-intro file, Gene does a first rate job of offering up the feeling behind the songwriter's words of woe. It's a fairly singular sound and performance from within the song-poem world, actually. Have a listen:

A big thank you to Michael, from me and all the readers and listeners!
Posted by Bob Purse at 11:11 AM 4 comments: