Today, to celebrate the completion of one year of song-poem of the week posts (52 of 'em!), I'm going to do something a little different, and hope both that I will be forgiven a bit of self indulgence and also that readers of this blog will find today's extra tracks enjoyable.

On several occasions, I've been part of performances of song-poems. Mostly, these have taken part at music-and-comedy parties that my friends and I have been holding for 25 years now, but I've also done recordings of a couple of song poems in my "home studio". Today, the original versions of four of my favorite song poems, each followed by a performance of the same song that I've taken part in.

First up, the record that is quite possibly my very favorite from the extended song-poem world. I say "extended", because this is a Norridge Mayhams record in which he himself takes the lead. For that reason, this is probably more of a vanity record than a song-poem, although Mayhams was, of course, actively involved in the latter, as well. With my love of Calypso, Rhumba and other Latin rhythms from the middle of the 20th century, the lilt of this one was a natural for me to love. And Mayhams Vaudeville-type delivery gets to me, too.

This song was part of the AS/PMA download page, so I'm sure it circulates among collectors, but may be unheard by some readers. The sound quality is horrendous (the 45 copy I own appears to be a copy mastered directly from a 78), but it's one of the strangest, most amazing records I've ever been lucky enough to hear, and it's called "Mary Ann McCarthy (She Went Out to Dig Some Clams) (Yes She Went to All the Parties)".

Five years ago, at one our periodic parties, I recorded a backing track for a live performance of this song, played the lead part on the same keyboard, and two friends played guitar and uke in the live rendition that I sang. My flubbed lead keyboard playing, and the fact that we repeatedly played too loud to hear the backing track (getting woefully off beat with it at least three times), would both normally be considered significant flaws, but somehow, they seem just perfect for a performance of a song poem. I hope you find this as enjoyable as it was to take part in:

From the other side of the musical and song-poem world comes David Fox, and his arrangement and performance of the Caglar Juan Singletary's fascinating and indescribable "Non-Violent Taekwondo Troopers". Here's the original, another of my all time favorites:

And here, from the same party as that performance of "Mary Ann McCarthy", comes a rendition of "Non-Violent Taekwondo Troopers". A friend of mine and I worked out a backing track for the song, including a "cold" ending for the song (which faded on the original record). During the performance heard here, I played the lead keyboard parts over the backing track, and my friend - dressed as "Captain Bicycle" - sang the song with great verve and panache. Again, I hope this recording, with the audience comments and reactions, captures the energy of the moment:

If there is a competition for my favorite song-poem (with "Mary Ann McCarthy"), one of the few other records in the race is Norm Burns' exquisite early '60's-sounding gem "Darling, Don't Put Your Hands On Me". Everything about this record is perfect, from the overall sheen of the thing to Norm's expert reading of the lyrics to... well, I'll just say that on some days I think of this as being as good as any record ever made. This one also was on the AS/PMA website, so I'm certain it's well known in some circles, but perhaps others have not heard it. Here it is:

Now, from another one of our parties, here's my friend Stu and I, with Stu singing, on an almost impromptu version of the song. I say "almost", because we had discussed possibly performing the song, prior to the party, and I had worked out what keyboard settings to use in case we did it, but there was no rehearsal and no other preparation, which explains the many moments of poor keyboarding (a couple of flubbed moments have been edited out) and some of the alternate lyrics employed. The sparse applause indicates that this was at the tail end of the party, with most of the attendees and participants long gone.

Finally, the first Halmark record I ever heard, sent to me in trade from song-poem hero Phil Milstein way back in the late '90's, long before this song appeared on an online offering of one of the final "MSR Madness" compilations. I was immediately taken by this song, "My Hamburger Baby", and wrote, requesting an entire cassette of Halmark records, the next time we traded from our collections. It remains an all time favorite of mine, a completely ridiculous lyric married to an out of date backing track, sung with complete sincerity:

A few years ago, I set out to make a note-for-note remake of this record (or as close as possible - there are no backing vocals, for one thing). Obviously, this has all of the authenticity of a McDonald's Hamburger, due to the midi instrumental track, but I still think it was worth the effort. This will part of my self-produced CD "A Few More Plans", whenever I finish the final tracks for this ten-years-in-the-making epic.

I hope you found these cover versions (and, of course) the originals, and would welcome any feedback or other comments regarding what you thought of them. And I'm always open to any requests for more of a particular style or label. I tend to feature tracks that appeal to me, of course, but am quite willing to expand that to include requests.

A Happy New Year to all who have stopped by to read and enjoy! Much more to come! 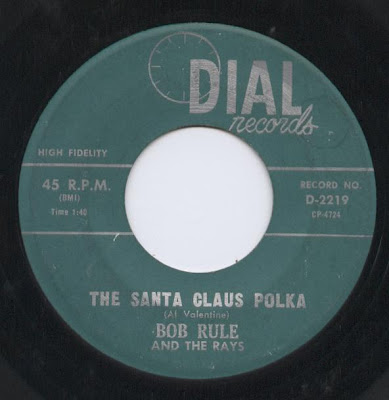 Today, a couple of Santa songs. First up, here's one of the first song-poem 45's I ever found, probably around 1998 or so. It's Sammy Marshall, performing here as "Bob Rule" with the group The Rays. I do love the ridiculous lyrics to this one, particularly the inspired verse line: "Dancing, dancing, dancing, dancing". To be fair, there are other lines here which work really nicely, including "they condition for their mission, and especially "feel that rhythm and you're in there with 'em".

This is the only record in my collection on the Dial label, the same outfit which brought us the fascinatingly off kilter "Our Hearts Were Meant to Beat as One". In this case, much as I enjoy "The Santa Claus Polka", I do wonder if the songwriter was the least bit upset that it wasn't set to music which at least resembled a polka.

On the other hand, this is more enjoyable record, in my opinion, than anything on the Song-Poem Christmas CD that came out several years ago.

For completeness sake, here's the flip side of the record, "That's My Desire, Dear". 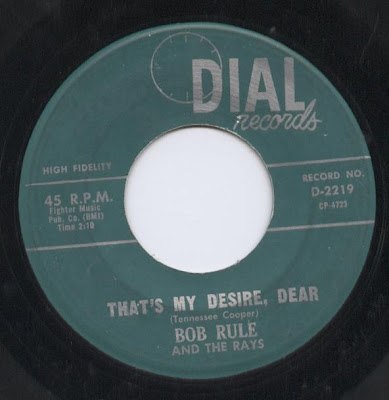 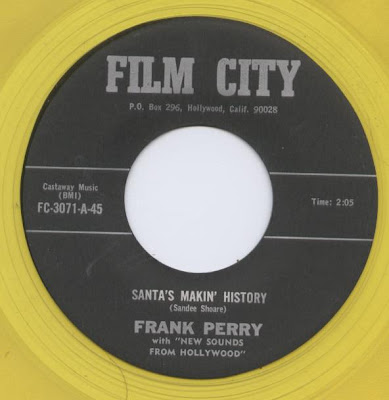 Along with one of my first acquisitions, here is the most recent addition to the collection, a nice Frank Perry vocal on "Santa's Making History" from the Film City label. I sure do love that Chamberlain sound. Or should I call it "New Sounds from Hollywood"?

And again, for those who like to have the complete set, here's the flip side, "His Love". This song threw me off the first time I heard it, with its lines about outer space mixing with religious thoughts throughout. The instrumental hook from the Chamberlain is especially nice here. Both of these songs come from the pen of song-poet Sandee Shoare. Come to think of it, I think I vacationed at Sandee Shoare once. Nice. 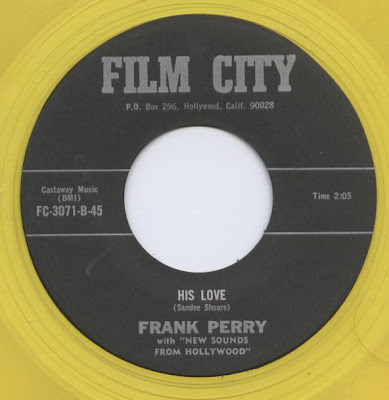 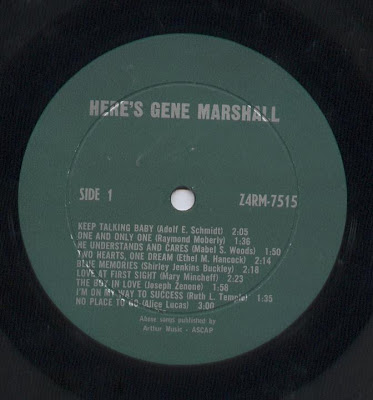 I don't know that I'll ever post entire albums here, but I have been working on a post to WFMU of a very nice Gene Marshall album. Time remains very tight at our home this week, and as a result, what I'm offering today is a teaser for a much bigger post which will show up around 11 CST tomorrow, 12/13/09 at blog.wfmu.org , the "Here's Gene Marshall" album, on Preview.

Here is my favorite track from the album, a quick little number which manages to recall (for me, anyway) both the patriotic tune "Over There" and Edith Piaf's "Milord". It's called "I'm On My Way to Success". 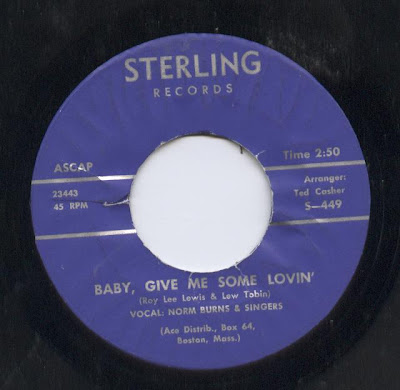 Time is very short today, so I'm going to dispense with my usual wordiness and just introduce one of my favorite song-poem singers, Norm Burns, sounding even more than usual like an early '60's teen crooner, on "Baby, Give Me Some Lovin'":

And here he is, in supper club mode, with "Golden Moments": 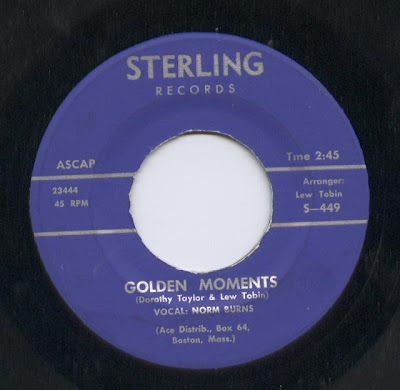