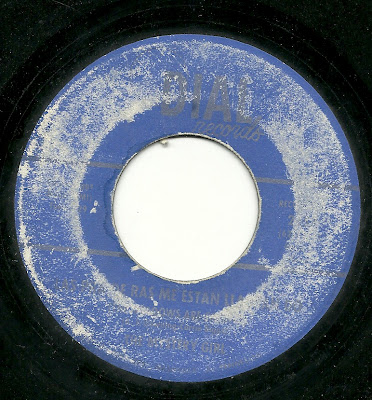 Today's record is downright peculiar, in many ways. Released on the tiny Dial label, a small and rather unusual label which seems to have released the works of a variety of song-poem factories (it's unclear to me whether they produced any material of their own). While most of these "third party" labels seem to have something which ties them together - a common lyricist or group of writers, one performer, etc. - nothing seems to tie this label together, as far as I can tell.

And this may be the oddest of the Dial records I've heard (although that vote may have to go to "Our Hearts Were Meant to Beat As One" by Bob Lloyd, a record which bears a similar setting and style to this record). It's credited to "The Mystery Girl", and although the title is sung in Spanish (and well enough so), the title, as printed on the label (admittedly very difficult to read), renders that Spanish title into gobbledegook.

The correct phrase would be "Las praderas me están llamando", which is then translated, on the label and in the song, as "The Meadows are Calling Me". Someone, presumably at Dial Records, decided to throw in some spaces, rendering the title as Las Prade Ras Me Están Llaman Do, which translates as "The Ras Prade Are Knock I Do". While that phrase coincidentally has a goofy little in joke for me (as anyone who has corresponded with me would recognize), and while I'd LOVE to hear a song poem with that lyric, I don't think that it actually means anything.

So who is this Mystery Girl? Damned if I know - I certainly don't recognize her from any other song-poem, or anyone else. I wouldn't be surprised if that's the same pianist, and slightly out of tune piano, on that legendary Bob Lloyd record, and the whole thing seems just a little bit off - I particularly like the splice, edit or whatever it is at the 1:34 point, and the little flubbed piano flourish at 1:57.

The flip side of this record is no slouch either, but from a completely different perspective - it's another wonderful offering from Cara Stewart, with music, of course, from Lee Hudson. There's a religious point of view this time, and it's the same old sound, but I sure do adore that sound of theirs. Here's "Dream a Dream of Heaven": 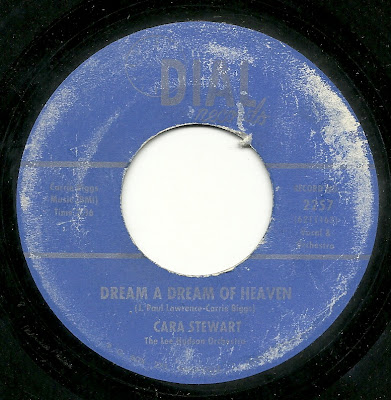 Email ThisBlogThis!Share to TwitterShare to FacebookShare to Pinterest
Labels: Cara Stewart, Dial, Song Poem of the Week, The Mystery Girl 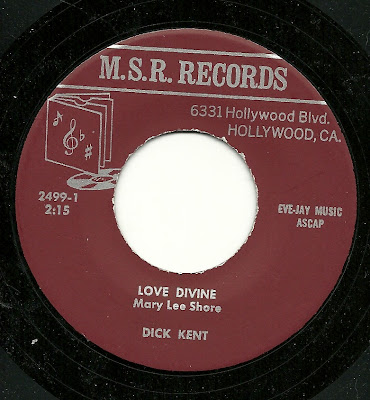 I've probably made it at least somewhat clear that I'm not much of a fan of MSR records, particularly not in the post-Rodd Keith era (a point that appears to begin about the time that MSR's record numbers mysteriously jumped from around 900 to 2100). And I rarely enjoy Dick Kent as much as I do many of his contemporaries in the field. Most of those MSR records I do enjoy are of the car crash variety, and this is one.

Seriously, listen to this thing. It's called Love Divine. I'm not sure if the problem lies with the construction of the lyrics - maybe they were just too hard to shoehorn into something melodic and singable - or in the job done by whoever wrote and arranged the music, but no one, not even the greatest singers on earth, could have gotten through this meandering melody line and this avalanche of non-melodious lyrics without at least a stumble.

The real meat is after about the 1:20 point - I particularly like the clunky line "we will overcome the rugged times" and then comes the final line, where Dick decides to offer up some particularly awful melisma on the word "arms", sort of stumbling over to the final notes, then completing missing the tune on the final repetition of the title, "love divine", as the pianist hits several completely random arpeggios, suggesting perhaps that the take has been ruined. But no, they went with it.

I wish I could offer up words of encouragement for those listening to the flip side, "I Just Keep Praying For You", but it's just dull, dull, dull. And when he sings "the roses have withered away" and "our green lawn is turning to hay", it seems like "I just keep praying" should lead to the near-rhyme (and natural response to dying grass and flowers) of "for rain", but no, the rhyme scheme disappears and the title "for you" appears instead. 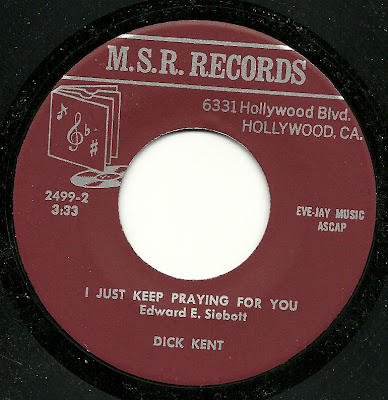 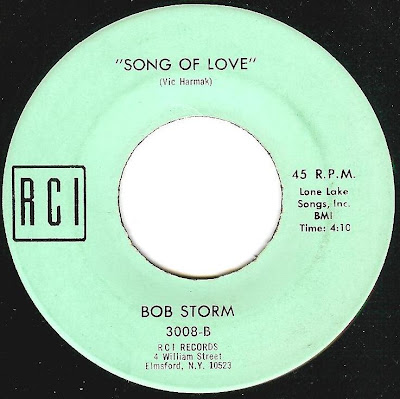 Virtually every record I have shared on this site has been from my own collection - the exceptions number less than a half dozen, and are among the most remarkable and wonderful of those things shared with me by other collectors. Today, I offer up a guest posting, a pair of songs sent to me a few months ago, which I sadly did not listen to until this week - I say sadly because I can't believe I did without this record for even the two months during which I could have known it intimately.

The lucky owner of this record is Darryl Bulluck, whose tremendous blog about The World's Worst Records should be required reading and listening throughout the English speaking world. That he has allowed me to share this astonishingly bad record here and not on his own site is a gift for which I will long owe him.

And award winningly bad this one is. Darryl and I share a deep love for the awfulness that is found in many, if not most records by Bob Storm. He is most often identified with Halmark Records, and I assume that this performance also came from that song-poem factory, but the results actually turned up on RCI, which appears to be a vanity label - the type set up by a few dedicated songwriters for their own products, which are then taken from whichever song-poem company was employed, each time around. Other records on RCI come from the Globe and Tropical song-poem factories.

I'll start with the b-side here, because I revel a bit more in it's preposterousness than I do the flip side. "Song of Love" displays the typical unctuous qualities that I know and love from Bob Storm. Not only does this sound more like prose set to music than poetry - it sounds like a love letter, and a prosaic one at that - but the real magic comes at the 2:15, when Storm starts narrating his love letter. At this point, I am reminded of the over-the-top bits that David Letterman's announcer, Alan Kalter, will often do, except that I assume that Storm was trying to sound sincere, rather than insanely pompous, which is the actual result. I have to say, those 20 seconds or so are among my favorite song-poem moments that I've heard this year. The dramatic mid-'50's backing sounds just add to the weirdness.

An interesting side note to this record is that although it fairly clearly comes from Halmark, I'm certain I've not heard either of these backing tracks before, on any other Halmark record, even though they were known to recycle their backing tracks, over and over again.

On the flip side, there is "Your Love", four minutes of Bob Storm bleating more obvious love blather, over a track that starts with supper club combo jazz, then devolves into more dramatic string blandness. The magic moment here is that Storm AGAIN narrates part of his performance, with insincerity equal to that on the first side. How I would love to know more about this guy. 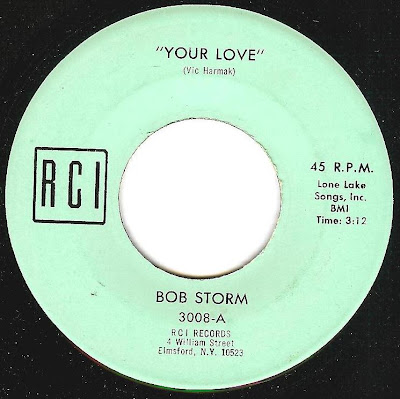 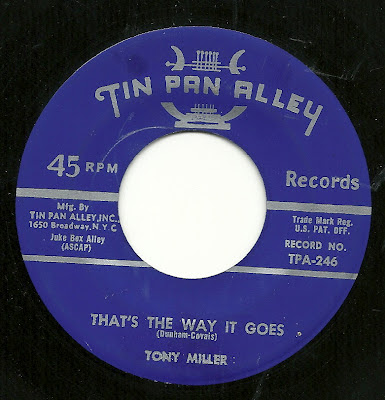 The Tin Pan Alley label went through more different styles of music than most song-poem labels. Partly this was because it existed for a long period, a period during which musical styles changed quickly and with wild differences. But they also appear to have made an effort to keep up with the styles of the day more aggressively than many labels.

A Sterling record may sound like something from 5-10 years earlier, and a Halmark record may sound (if it sounds like anything ever released) like something from 30 years earlier. But a Tin Pan Alley record is likely to sound in the neighborhood of what might be on legitimate releases from the same year it was released, although often the quality of the music and lyrics would be several steps below those legitimate records, particularly on the records from beyond about 1962. Today, two records from perhaps eight years apart, which share nothing in common except for the label on which they appeared.

First up, someone named Tony Miller, with what may be his only appearance on a Tin Pan Alley record, or any song-poem record, and it's a really good, fun one, too. "That's the Way It Goes" appears to date from about 1958, and it bounces along in the pop-rock-rockabilly hybrid feel of more than a few 1957-58 records, with a trebly guitar leading the way, and a doo-wop bass singing what sometimes seem to be almost random oom-boppa's, and a rhythm section that wouldn't have been out of place on dozens of records I can think of. I like this a whole bunch - maybe you will, too:

"Don't Say Goodbye" is on the flip, and this one begs for a doo-wop arrangement that never shows up. Although this is clearly the same band as on the other side, and they do their jobs well enough, I don't think this one is nearly as inspired as its partner in vinyl. 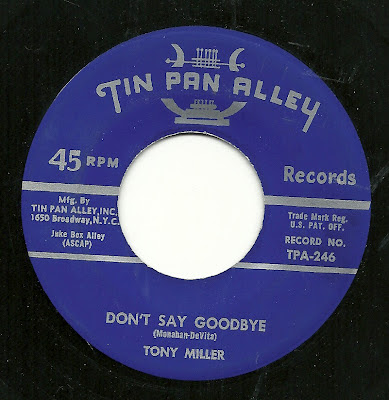 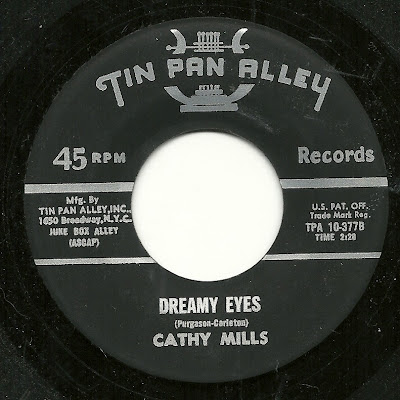 By 1966, and going forward for the next few years, Tin Pan Alley had morphed into a low-fi, lower budget house of garage rock and, for lack of a better term, garage pop. Many of these records are ridiculously minimilist, are often poorly played, and feature amatuerish singing - I've shared more than a few of them. They don't sound like most of the biggest hits of the mid '60's, but they do share something with the more homemade sounding of the hits of the era. The records I've posted by Mike Thomas

"Dreamy Eyes" by Cathy Mills, barely qualifies for the above description, and some listeners may disagree that it has any overlap with the pop of the era at all. But in it, I do here some of the simple-as-a-garage-band quality, and to my ears, it also has some of the Vo-De-Oh-Do feel that can be heard in some of Herman's Hermit's hits, and which was just coming into vogue in early 1966. Not to say that it's very good - it's fairly ridiculous, but at least in a fun sort of way.

"Come Home to Me" is the sort of pleading ballad that could have been released at any point from the mid '50's, well into the '60's. But this record is remarkable for containing a fairly early reference to missing a soldier who is in Viet Nam. The number on this record fairly well places it as being from late '65 or early '66, well before most pop records (Barry Sadler's being the big exception), or indeed any other song-poem I've heard, were making lyrical reference to that conflict. 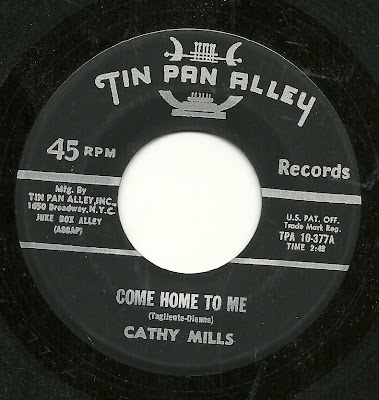