Shortly after I began this song-poem-of-the-week project - exactly four years ago this week, as a matter of fact - commenters began requesting that rather than share just one song, that I post both sides of any single that I choose, and that I scan and include the labels from both sides. I aim to please, and with very few exceptions, I've done that in all of my posts since early in the project.

But I didn't do so in my recent WFMU post of ten Christmas song poems (which, in case you missed it, can be found here). So, in a little act of end-of-the-year housekeeping, here are nine of the ten flip sides from the tracks featured in that WFMU post (as mentioned in that post, the tenth record, "Picolo, The Christmas Elf", had a significant, crescent moon shaped crack in it - the flip side was virtually unplayable, and in trying to make it playable, I broke that crescent shape right out of the record. Ah, well...) 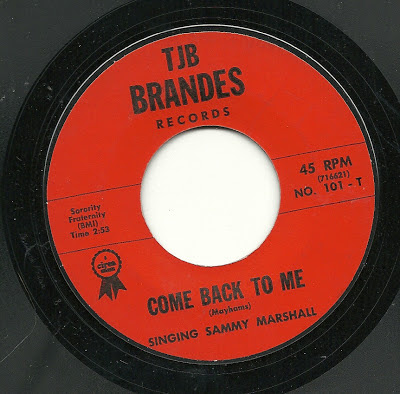 I actually believe this record, and one other (below) have been available online at some point, and may circulate among collectors, but I can't find that either of them are currently available, so, in the interest of completeness, I'm including them. The flip side of the Norris Mayhams Christmas single "Jingle Mint Twist", also by Mayhams, and sung by "Singing Sammy Marshall", is "Come Back to Me":

The flip side of Norm Burns' "Christmas With You" is the rather bland "Living Rose": 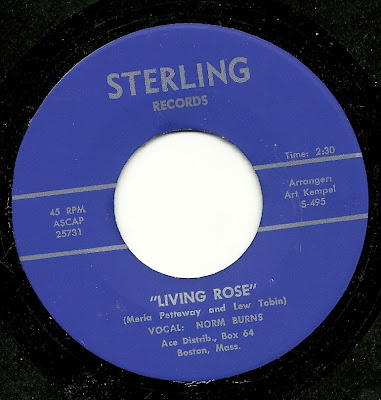 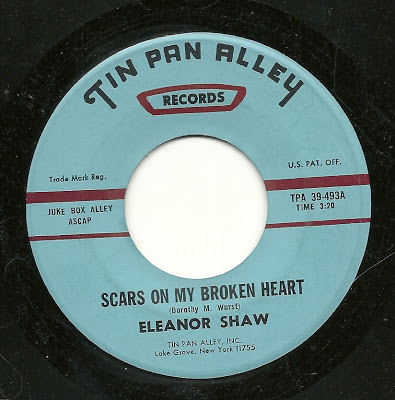 "Xmas and You" may have been a bit of sweetness from Eleanor Shaw, but the flip side is anything but sweetness. Have a listen to "Scars on my Broken Heart":

The high-end song-poem outfit Stylecraft brought us "Christmas in Ireland" in my WFMU post, and on the flip side, the same batch of performers, headed by Lynne Richards, offers up "You've Got to Live to Love": 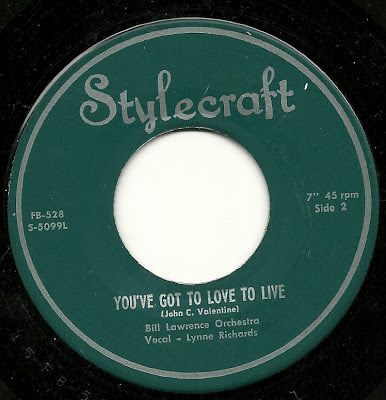 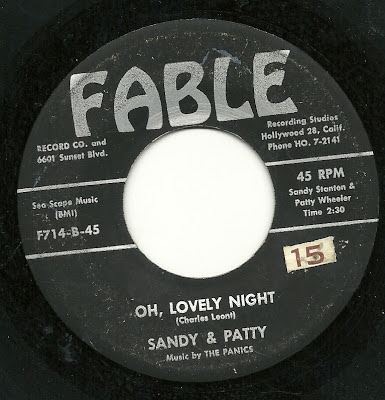 Next up, two songs which I really should have included in that WFMU post, because they are both Christmas songs. But I was paying attention to titles, and not having a re-listen before making the files, so I didn't pay any attention to that fact. Here, a week or so late, is the flip side to "Christmas Tree", Sandy & Patty's Fable label rendition of "Oh, Lovely Night":


And another Christmassy one, here's that other record that I think probably floats around in trading circles, Rod Rogers' flip to "Smile, It's Christmas", in which he expresses a holier thought for the day, "Let's Share a Prayer": 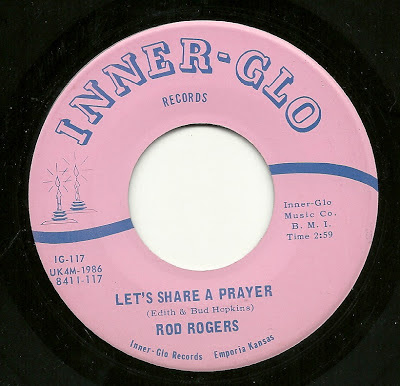 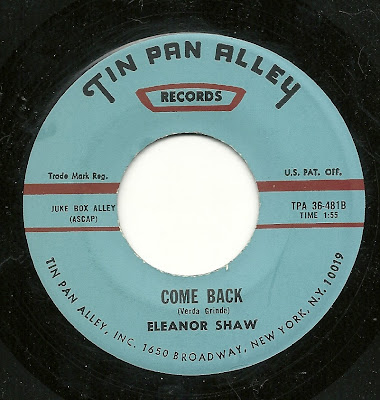 Eleanor Shaw is back again, with the flip side of "Dear Santa", which is titled "Come Back":

As was often the case on MSR records, labelmates shared a release on MSR 2377. On the reverse of Dick Kent's "Everywhere You Go on Christmas" lives Bobbi Blake's very un-Christmassy "Wicked Woman": 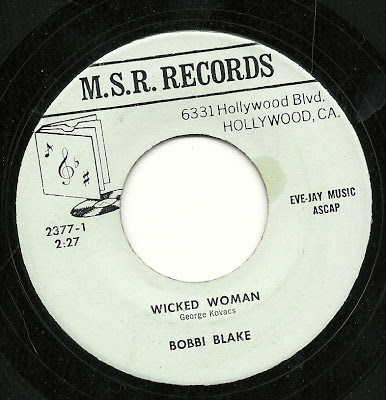 Saving the weirdest for last, here is Madelyn Buzzard. At WFMU, I shared her song "Christmas is the Love Within Your Heart". For the flip, we have the mid-winter saga "Chicken House Blues", which pairs deeply strange lyrics with half-assed musical performance, and Madelyn's relentlessly terrible singing for true song-poem trifecta. Enjoy! 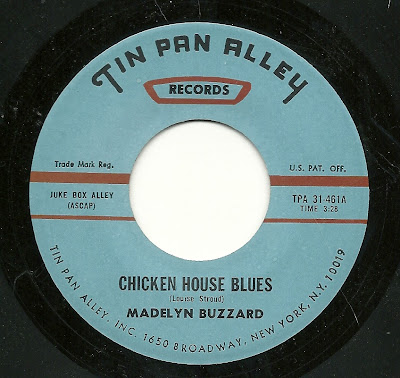 HAPPY NEW YEAR - It's been a challenging, at times wretched year, for family, friends and neighbors. Aside from a bright spot at the beginning of November, there's not much I would want to relive, and I'll be happy to see a new, hopefully better year come along. Despite all that, I have greatly enjoyed, yet again, sharing all of this wondrous, odd and unique music with you, and one bright spot has been the feedback that I've received here, and at WFMU, and for that I am thankful. 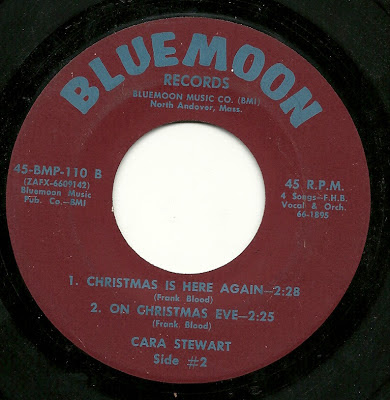 It's Christmas Eve! I'm busy, you're busy, and if you're half as busy as I am, then I'm twice as busy as you are, or vice versa as the case may be.

So I'll just say a few words about today's EP, and then let you listen to the magic of Cara Stewart and her svengali, Lee Hudson. This EP showed up on the Bluemoon label, which seems to have been set up by and dedicated to songs written by someone named Frank Blood. On the b-side of this record are two song-poems which seem perfect for Christmas Eve listening, and here they are.

The first is "Christmas Is Here Again":

Following that one is "On Christmas Eve":

The flip side of this record, which was actually designated as Side One, features two non-Christmas songs, both of them wistful wishes set to music, portraying one half of a loving couple, writing about and two his far away lover. The first is "Rosewood Cottage on the Hill":

MERRY CHRISTMAS TO ALL, AND TO ALL A GOOD NIGHT!!!! 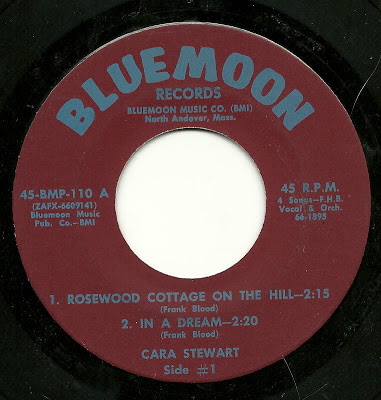 Before offering up this week's seasonal offering, I wanted to provide a link, for those who may have missed it, to the post I did of TEN Christmas song-poems, at WFMU last Sunday. It can be found here. 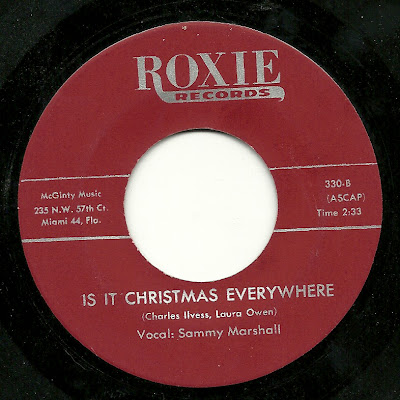 For today's feature, we have the ubiquitous Sammy Marshall, showing up this time on the Globe offshoot Roxie label, but sounding as canned as smarmy as a Globe imprint Sammy record can, as he ponders the question "Is It Christmas Everywhere?"

As I've found is often the case with Christmas song-poems, the better half of this single is found on the flip side - the non-Christmas side - of the release. In this particular case, "better" is a relative term, but I'd certainly rather have a second listen to Sammy and his label-mate Mary Kaye warble "While I'm Still Missing You" than I would to Sammy's Christmas offering. 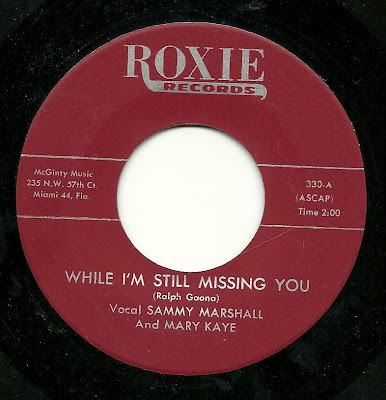 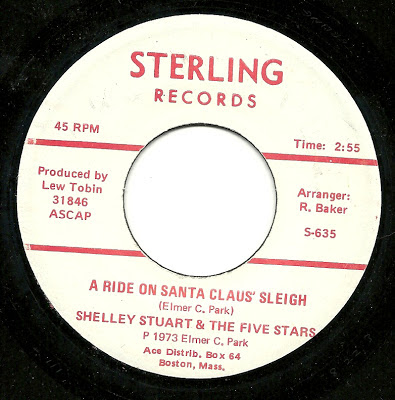 Today, in addition to sharing another Christmas song-poem here, I'm also preparing a whole set of the same, which will appear at WFMU's blog tomorrow. That being the case, time to blather on is virtually non-existent, so I'll just share that the offering for this week features Shelley Stuart, one of the secondary acts at Sterling Records, singing (appropriately, I guess) in a rather girlish voice about "A Ride On Santa Claus' Sleigh":

If it weren't for the Christmas theme I'm employing this month, this record's flip side would absolutely have been the first one featured. It is the better of the two songs, it features a personal favorite of mine, Norm Burns, and most of all, it's got a downright weird construction - very rare for a song poem - in that it has an unusual and creative chord progression that shows up at the beginning and the end of the record. It's a little thing, and quite short, but it's sort of startling. And since that progression doesn't appear anywhere in the vocal part of the record, it is in a sense superfluous - the fact that they added it  is evidence of the need to find a creative outlet, even when doing something that is often hackwork. Have a listen to "Let That Little Girl Dance": 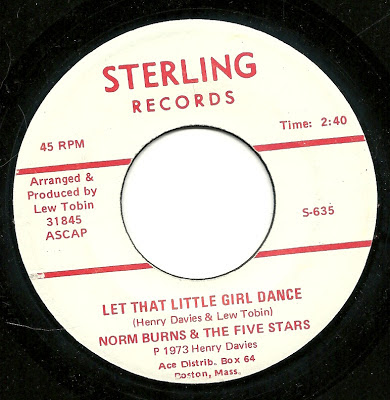 It's That Time Again! 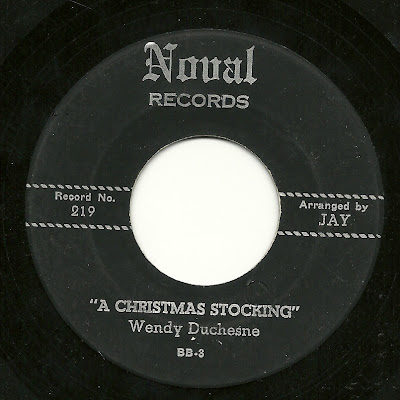 Now that December is upon us, it's time to again reach into the cornucopia of Christmas song-poems, and pull out the first of at least four holiday-themed 45's that I'll feature here during the weeks leading up to Christmas (and, if I can motivate myself, perhaps another half dozen that I'll put up over at WFMU next weekend).

And what better reason (as if I needed one) could there be to share a record on the ultra-weird and shadowy Noval label. And I think the first song featured from this 45, "A Christmas Stocking", is the only record I've heard on the label not to feature the sort of bland, pitch challenged male singer that seems to pop up on every other Noval release, including the flip side of this 45.

But in this case, the singer is a slightly more effective (emphasis on slightly) female singer, although as always on this label, she's accompanied by a bare bones combo (albeit with the addition of jingle bells ringing on every beat - on the other hand, I'm not sure I hear the vibes, which are usually the nicest part of a Noval record). The song itself is a generic tune, contained in a record which would barely last 80 seconds, if not for the fact that the backing band plays the entire tune through before the singing starts.

For the flip side, "Thinking About Christmas", the voice-of-Noval is back, as are the vibes heard on most of Noval's records, and as is the meandering, near-tunelessness which is also a Hallmark of the label's releases. But hey, it's Christmas! 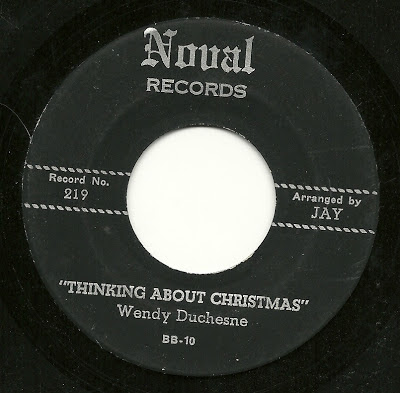