A Little Golden Record About Hippies

I hope it's warmer where you are than where I am. But not over 75 degrees. I don't like that, either...

I will get to today's feature in a moment, and will also, by request, start sharing more of my "Cut-Up" tapes, but first:

I discovered a couple of days ago that I skipped over "fixing" two posts from 2007, and so I have corrected those, as well as one post from 2006. There are now barely 20 more posts that need to be overhauled. And from here on out, almost all the posts I'll be repairing actually never had files in them before. That's because, for the first 18 months or so, I was uploading tracks to an e-mail account and giving out the password so that anyone could get in and download them. In fixing all of those early posts, I will be doing the same as I've been doing all along in repairing of posts, and putting in a play feature and a download feature.

For today, I have correctly those two posts from October of 2007, one featuring a Rudy Vallee 78 that I just love, and the other featuring a musical mystery which I wrote about much more extensively at WFMU about a year later. I have yet to get an answer to any of the mysteries contain in the post here or at WFMU, so if you have an answer, by all means, let me know!

Going back even earlier, I also updated my final post from June of 2006, which featured a novelty record about beer, which was fairly obscure at the time, but has had multiple postings to YouTube in the years since, often incorrectly credited to Thurl Ravenscroft. 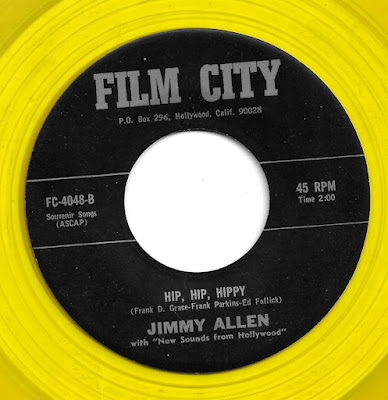 The performer - Jimmy Allen - is not credited elsewhere on the label, or anywhere else in the song-poem database, and both songs are credited to a team of three writers. Both of these facts might serve to indicate that this a vanity release, but I don't think so. A "Jimmie Allen" shows up on a Rodd Keith production on the Kondas label, and one of the writers - Frank Parkins - seems likely to be the same person as a Francis Parkins who had a song produced for him on the Vellez label. So I think it's a song-poem while accepting that it might be more of a vanity release, something Film City did with some regularity, simply providing Chamberlin backing for the composer/performer's song and performance.

Anyway, whatever its history, these songs are worth hearing, particular "Hip, Hip, Hippy". This is the rare song-poem which talks about the Hippies, and has nothing but good to say about them, and in fact dismisses the thoughts of those who look down on them. Now, I've listened to this track four times today, and the only positive attribute being described is that hippies aren't tied down, and like to go where the road takes them. That doesn't strike me as good or bad thing in and of itself. However, there's no missing the feelings behind:

"The hip, hip hippy's not so dip, dip, dippy as the whole world thinks he is"

The clumsy edit at the 1:02 mark is a wonder of incompetence, by the way.

If you have a thought about this records provenance, leave a comment!

The flip side, "Trina Bird", is no slouch, either. Sounding extremely similar to the track behind, "Hip, Hip, Hippy", this song is a tribute to an apparently quite winsome teenage girl of the protagonist's acquaintance. And apparently Trina likes the singer just as much.

Oh, and I meant to point out - and before I could even come back in here and type it up, Sammy Reed beat me to it (see the comments!) - both of these tracks have the odd feature, which I've commented on with a few other records, of featuring a fade out, but ending with a final chord before the fade out finishes. Very strange. 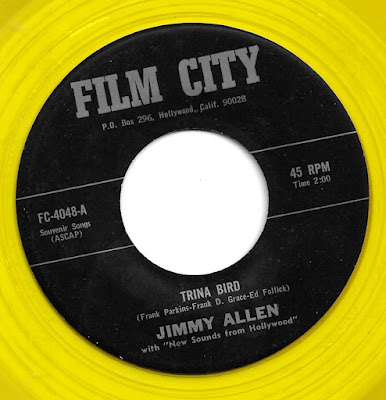 ~~~
And now....
Recently, I linked back to a very old post in which I'd shared two of my "cut-ups", tracks made in which I played around with the sounds and lyrics of favorite songs, replacing lyrics with words or lyrics from other recordings, or simply messing around with the sounds of a track. 95% of more of those "cut-ups" that I have, I made as a young adult, while in college and/or single, and with a LOT of time on my hands, doing all of the edits on a cassette recorder which had a very effective pause button.
My "cut-up" work slowed to a crawl in 1985, when I met my then-future wife, and started working full time, and had stopped altogether by 1988, when we got married. Ah, to have that sort of free time again. I've made perhaps two dozen such playful tracks in the years since, mostly using computer software.
Anyway, I heard from someone named Douglas who wanted to hear more. Actually, if I understood correctly, it sounded like one of those shares from the earlier post was going to get played on the radio! Thank you very much!
In response, I will share some more. Today, one of the few that does not actually feature the sounds of a lot of different tracks, but mostly (except for the last two seconds), just a rearranging of the sounds of one track, in this case, "Twist and Shout" by the Beatles.
I consider this a hell of a lot of fun, especially starting at the 0:30 second point.
Download: The Beatles - Twist and Shout (cut-up)
Play:
Posted by Bob Purse at 2:08 PM

Hey - Another song that ends during the fade-out!

Well, that "Twist and Shout" cutup has made me laugh for, what, 40 years? Still gives me spit-takes.

I really like this Jerry Allen record! Both sides! It's got to be Rodd, doesn't it?