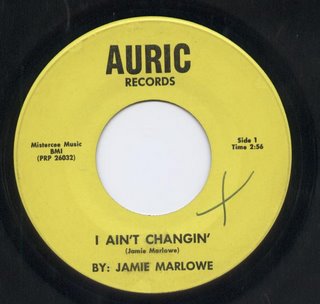 "I Ain't Changin'" by Jamie Marlowe.

Now, here we have the real "difficult listening" file. I don't recall where I got this record, and at some point it went into the "stack of records to listen to when I get a chance". First time I heard it has to have been close to 20 years ago, if not more, but I've never forgotten it. I immediately had both the song title and the name of the "artist" seared into my memory.

I hope this was a vanity pressing, because if someone actually released this as a money-making venture on a "real record label", they were probably better off in another buisness. The annoying qualities of Mr. Marlowe's performance are matched by the wretchedness both of the lyrics and of the person those lyrics describe. To whoever drew the big "X" on the record label: it was richly deserved.

Ick. On the other hand, as I said, I've never quite forgotten this record either, and now, perhaps, it can infect you, too. Tell me what you think!
Posted by Bob Purse at 9:35 AM

One of the great things about confessional songwriting is that it brings you into the personality of the singer. Sometimes it's an awfully ugly place.