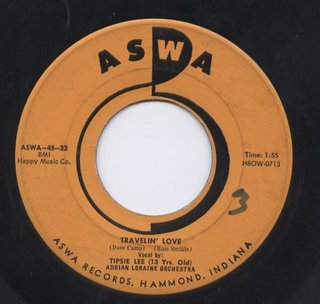 Next up, and not wholly unrelated to Ms. Layne, is Miss Tipsie Lee, who was apparently even younger at the time of this recording than Ms. Layne seems to have been trying to sound: according to the label, Tipsie was "13 years old" when this record was made, and I can certainly believe that.

But as much as some others might quickly lump this into the "difficult listening" file, I find that there is something magical happening here. There are points in the song where it feels to me that the train (heard at the beginning and the end of the song) is about to slip right off the track. The energy in Tipsie's lead vocal is infectious, in a way that I rarely hear in the voice of a grown singer, and I'm a big fan of records where you can hear the intake of breath before a big vocal.

I found this record at the late, lamented record store "Toad Hall", of Rockford, Illinois, easily the best record store I've ever been in. Three buildings, two of them combined storefronts. However, the owners had taken over the basement and what had once been upstairs apartments, and virtually every space in the buildings, even closets, where stuffed with records, except those places filled with books and magazines. The third building housed nothing but 45's and 78's.

Sadly, the owners both died in the past three years, and the store is no more.
Posted by Bob Purse at 9:19 AM

You'll be happy to know that Toad Hall is open again with new owners from New Jersey. I don't know if the store will have the same spooky appeal and if the legends that were supposedly true are still true but when it comes to simply buying media, it's available. :)

Hey there! I guess I probably found this song posted by you over at WFMU. I downloaded, stuck it on the iPod, and I was hooked on it very quickly.

You're absolutely right, take a small group who know each other well musically and play with a lot of energy, throw in a girl with enthusiasm to spare and you get a song that jumps out of the grooves. I'm always singing along by the time we get to "You hit the road and jilted me".

I listened to it so much that I ended up hunting down a copy of it on ebay that sounded like it had been played once and then returned to the back of their record collection for about 50 years. As you'd know, the b-side is okay, and quite good within its genre, but it doesn't push you forward with every beat like Travelin' Love does.

I also wonder now if I'm the only person in Australia with a copy of this disc. Probably...

And Travelin' Love has joined an exclusive club - songs that I can't listen to just once. I put it on and turn the auto repeat on the turntable up to about 4 reps. I only have 4 other records that get that honour - Dinah Lee's version of "Don't You Know Yockomo", The Easybeats' "She's So Fine", Cathy Carr's "Sailor Boy" and Joan Armatrading's "Drop The Pilot". They're all upbeat and infectious, so I guess they just get right into my head.

As someone who's not averse to um...unusual music, I'm really enjoying going back through your site. Thanks for the effort!

Since this is an old blog, I'm not sure that anyone would see this. I've been going through old family records and came across the Tipsie Lee "Traveling Love" 45. You might notice that the recording was produced by the Adrian Loraine Orchestra. Well, that is my Dad! We lived in Hammond Ind. and my dad had a recording studio in the basement. I was so excited to find this blog!
Marilyn

Don't know if you'll see this or not, but be assured that this blog continues to be a going concern, and I'm very glad to have heard from a relative of someone who was involved in this wonderful record. I love learning that this was recorded in a basement!

Wow! Just when you think the internet has turned up something fascinating, it twists and you get something even more interesting than before. Recorded in a basement in Hammond, IN.

I also managed to find another copy of this record - on a different label (Salem, from Chicago), and a different recording.

Well...it's not very good. It's been recorded in a proper studio with real backup singers and everything! And as a result, all the charm and spirit is gone.

At first I thought it was plain awful, but then I realised just how good it made the original sound. It's still awful, but it helps to put things into perspective, ifyaknowwhatimean.