Hey there,
Before I get to today's rockin' offering, I wanted to share something that Sammy Reed, who has offered so much to this site over the years, wrote about this Halmark posting from two weeks ago.
I will say right off the bat (a little pun there) that I don't know anything about the various sites and discussions that go on about Rite pressings. That's not my area at all, and if you explained to me what they are and why they mattered, I'd probably be looking at you blankly within 27 seconds.
But what Sammy found is that the numbers on that Halmark disc line up with a gap in a Rite discography quite nicely, and that the Halmark release is probably the missing disc in that discography. Here's where it gets interesting for me: assuming he's right (or Rite) about where those numbers come from, then the Halmark disc in question is from 1966. The song poem archives website has Halmark ramping up to a start in 1967, and most of what I've read and learned has them doing most of their work in or after 1970. I just thought that was interesting enough to mention.
And now, let's visit with my sixth favorite Marx Brother, Teacho: 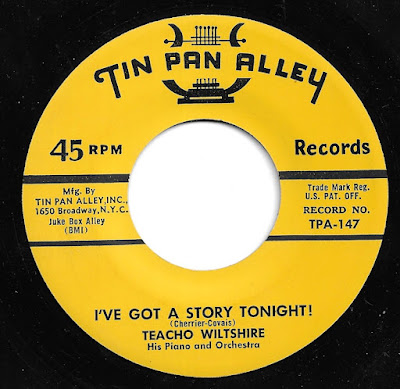 Have I mentioned that I tend to really enjoy records by Teacho Wiltshire? His tenure with Tin Pan Alley was brief, at the very start of the label's history, and I think I now own a copy of all but one of the records that came out under his name on the Tin Pan Alley label. (He also went on to a successful and distinguished career in the more legit music business.)

I really like both sides of this record, which is from 1956, but my vote for the better of the two goes to "I've Got a Story Tonight!". It's a rockin' slab of vintage R & B, in which the first person narrator tells his sad-sack tale to a bartender. Sometimes, I think I write to much in describing a record, so I'm gonna stop there, and let this one speak for itself.

Download: Teacho Wiltshire, His Piano and Orchestra - I've Got a Story Tonight!

On the flip side, there's another pretty good mover and groover, titled "Check Your Heart". I enjoy Teacho's vocal mannerisms, and I think in this case, they - as well as a pretty hot band - make the song better than it would otherwise be. I could even easily imagine someone liking this one more than its flip. Good stuff!

Download: Teacho Wiltshire, His Piano and Orchestra - Check Your Heart 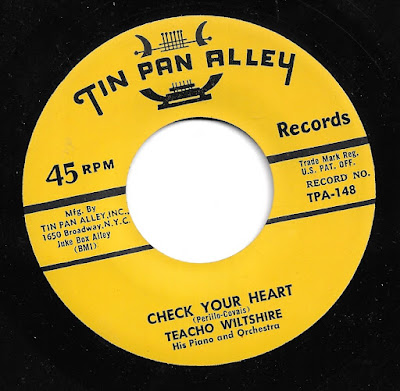 And now, it's cut-up time. Or rather, one cut-up and one mash-up. The appetizer is the cut-up, and it is about as brief as a joke can be. Every now and then, while playing around with records, I would get an impulse to take a record that I found particularly wretched and/or annoying and dispense with it with a quick one-off joke. Too many of those, and it'd become repetitive, so I just did it now and then. Here's what I did with a # 1 song from 1963 that I've always thought was aggressively stupid:
Download: The Angels - My Boyfriend's Back (cut-up)
Play:
And that mash-up: In 2005, when mash-ups were still (I think) a fairly popular thing, I got the impulse to do a bunch of them, from my own weird perspective. I posted two of them, many years ago, here, and here.
But before I did either of those, I put together the following little item, which I think is quite inspired. I was listening to "Rainy Day Women # 12 & 35" by Bob Dylan, and got to thinking about the the rhythm played in the opening drum beat. What song, I wondered, had that distinct rhythm, and might make for a good mash-up.
What I thought of was a song from 1956, which is about as innocent a record as you can get, the polar opposite of the Dylan track. But they both had that rhythm, and in that way, they fit together perfectly. Over the bridge section, which occurs twice, I layered altered elements of another song, one from 1967. I suspect many of you will recognize where that sample comes from, as well. Quite simple work, actually, but very effective.
I hope you'll enjoy this. It's one of my favorites.
Download: Tonight You Get Stoned (mash-up)
Play:
Posted by Bob Purse at 8:07 PM

A great series of songs! I really dig both of these Teacho sides, although the repetition on side B tends to keep it from greatness. The a-side is the one, I think. And I love both of the extra songs--"Tonight" has been a fave since I heard it. Thank you!!