My Song & My Tears 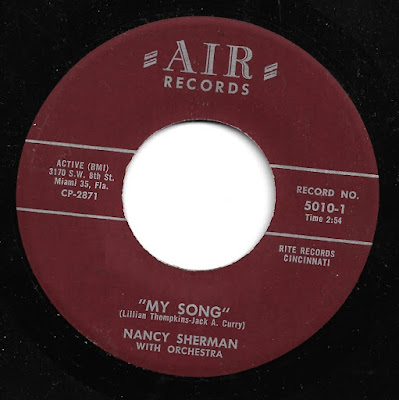 Today, we have a song-poem singer that I've only featured once before, and in that case, only one side of a 45. Her name is Nancy Sherman. The Air label didn't have its own studio, and relied on several of the other song-poem companies for the recordings released under its label. I believe this one comes from the Globe song-poem factory, very early in the existence of both Air and Globe (this record is from 1960).

As he did on most of the earliest Air releases (but rarely after 1960), label head Jack Curry attached his name as a songwriter on both sides of this single.

The better of the two songs and performances, by a wide margin, is "My Song". I find this track slinky and fairly sexy, veering almost into Lee Hudson territory at a few points. I particularly enjoy an excellent, Les Paul influenced solo. Nancy Sherman is no great shakes, missing a few notes here and there and hanging onto a few others fairly shakily. But the overall effect is pretty nice.

"Tears of Fate" on the flip side, is a ballad, with lyrics which seem to be quite heartfelt and personal to the writer. However, I have listened to it four times today, and I can't make head or tail out of them. Would someone out there like to decipher the story here?

Nothing much happens here, musically, and Nancy Sherman's performance indicates that, whatever her abilities on the mid-tempo "My Song", she was not suited for this sort of slow material at all. The pitch problems hinted at on the flip side are all over the place here, and she shows a significant lack of ability when holding longer notes. 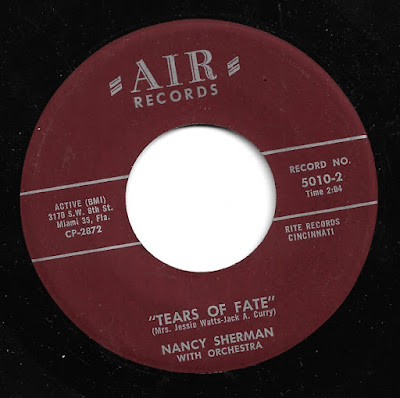 And now, a few more cut-ups. First up, a very short one-off joke, but a very good one, I think. My friend Stu thinks this may be the funniest thing I ever did in a cut-up.
The song is "Teenage Brain Surgeon" by Spike Jones, featuring a vocal by the incomparable Thurl Ravenscroft. It's not necessary to know the song - although I'd encourage it, as it's great - but just know that I took the first four words, and then cut out everything except the last word of the song, making a complete sentence (and statement), and, in effect, a very, very short, but complete song.
Download: Spike Jones Featuring Thurl Ravenscroft - Teenage Brain Surgeon (cut-up)
Play:

And here's the main dish. If you've read certain of my posts, here or on WFMU, you'll know that I revere Pete Seeger, considering him to be both the most important American musician of the 20th century (musically and politically), and the greatest singer ever recorded.
On his 1955 album of Union songs, he sang the anthem "We Shall Not Be Moved", along with a chorus of friends, including a not-yet-famous Mary Travers. It's one of my favorites of his recordings.
While doing cut-ups, I realized that I had a tape I could excerpt featuring a friend of mine saying the word "bowel", and that this was too great an opportunity to pass up. I also stuck in a bit from a tape where another friend read of the name of an album that was sitting on my piano, the classic comedy album, "Inside Shelley Berman", and used some other creative drops-in throughout the rest of the track. Here's the result.

Download: Pete Seeger - We Shall Not Be Moved (cut-up)

Hey, and both of these are G-rated!

Well, I like your content better than the Nancy Sherman record, although as you say side A has charms, the largest for me being that wunnerful guitar solo!