That Was Quite a Conversation!

(A side note right off the bat. I know this label says "Hallmark", but the company primarily used the spelling "Halmark", and to keep things easier with references and with post labels, I'm staying with "Halmark".) 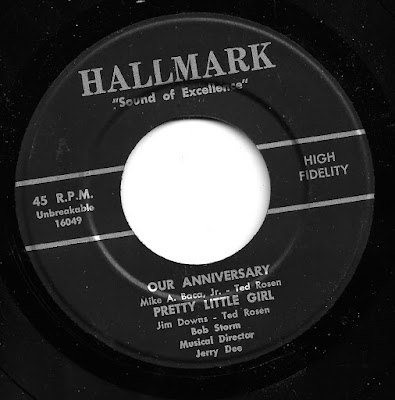 Today, I'm sharing a Halmark EP (one of the relatively few that credits the man known as Bob Storm on the label), entirely because of the first song on the disc.

This song, "Our Anniversary" involves looking back at a first conversation (a "meet cute" as they say) between a now long-lasting couple. The relating of this conversation - well, the actual "lines" which are reported), is so ham-fisted and ridiculous that I laughed out loud the first time I heard a particular line from it, and I couldn't want to share it with you.

The song lasts about three minutes, but the key section is from 0:36 to 1:27. I somehow hope this was a first person report, except that I can't fathom that the conversation related actually happened.

The rest of the disc does not meet the standard set by the opener, and I don't have much to say about them. "Pretty Little Girl" comes next, and like "Anniversary" it is based on one of the most common Halmark backing tracks. I will say that, had I come across this track on a early 1950's 78, I would have believed it was a (poor) attempt at making a hit record, which is something that I can't say about most Halmark records (or most song-poems, but particularly not most Halmark records). The melody, for one thing, holds together pretty dang well, comparatively speaking. The problem (well, one problem) is that this record probably came out some time in the mid 1970's.

Oh, and I literally just heard in my head that this backing track might well have been created for a version of "Who's Sorry Now". Have a listen, and see what you think!

~~
Flipping this precious disc over, we hear yet a THIRD of the most common Halmark backing tracks, this time accompanying the song "One and Only"
Download: Bob Storm - One and Only
Play:
The EP finishes up with "My Mother's Lullaby". Here we have a slightly less frequently used backing track, one which approximately no one would associate with the word "Lullaby". This is one of those songs that uses all the letters in the song to offer words that spell out "Mother", and how they apply to mother. This is not, in my opinion, handled well by the lyricists, nor is it a song-style that suggest a "lullaby" any more than the jazzy backing track does.
The melody chosen here puts a real strain on ol' Bob's pipes here, too, especially as he sings the words "the ease with which you show your love", a phrase which just rolls of the tongue, and which is, of course, exceptionally well suited for use in a melodic song.
Download: Bob Storm - My Mother's Lullaby
Play: 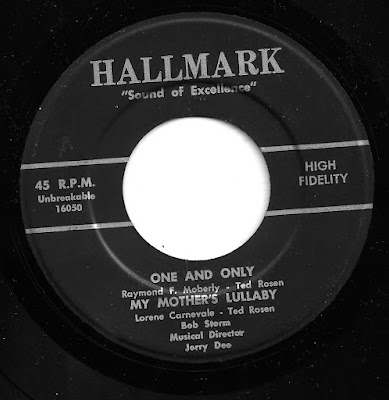 And now, a couple of cut-ups. Just so you know, whether you like these, hate 'em or are somewhere in between, I think I'm getting to the end of those which are presentable. Although I have about seven 90 minute cassettes full of these things, most of them are not worth hearing all the way through. I've been trying to give you the cream of the crop. Not sure how many more from that category are left.
Anyway, first up, I have another appetizer. What you'll hear below is me fooling around with an American Top 40 broadcast in which Duran Duran had the number one song with "The Reflex". "The Reflex" is one of only two Duran Duran songs that I really enjoy, and by far my favorite. I really love the work with edited within the track, and the wild melody of the bridge. And that's what I played with here. There are two sections, the first making fun of all that editing that's within the song, and the second, playing with the band's name:
Download: Fooling Around with Casey Kasem and "The Reflex"
Play:
And here's something a bit more substantial. I've already shared one cut up of Walter Brennan's "Old Rivers" - not even a month ago - but I made at least a half-dozen attempts to do something funny with that record, as a story song, particularly one which is spoken, lends itself to what I was doing about a perfectly as anything can. Plus, "Old Rivers" is a wonderful record, and it's fun to play around with records I love. So this is a different cut-up of "Old Rivers than the one I previous shared here.
As you'll hear, near the end of this track, I made great use of a Jack Brickhouse "History of the Chicago Cubs" record.
Oh, and this one is free of four letter words (well, unless you count "fart"), although there are still at least one phrase here which might not be safe for work.
Download: Walter Brennan - Old Rivers
Play:
Posted by Bob Purse at 6:13 PM

I think starting a song with "M is for you (U)" is a pretty ballsy move. But you're right, the three last songs on the EP just don't cut it, even with the great backing track on "One and Only." Somehow I seem to recall you playing this for me, or telling me about it, because of that "hey, mister sick man" line. Genius of a kind.
Thank you!
Stu