It Happened to Norm

Howdy,
I'm going to do something I've mostly avoided doing today, and I'll get to that in a moment, but first, I want to thank the folks who have congratulated me on the new job - I really appreciate it - and also shout out to long time reader Jeff, who offered his first comment last week, and a very nice one, as well. I do like to respond to these things in e-mail, but I understand why many people choose not to attach their e-mail addresses to blog comments.
And now:
~~
The thing I tend not to do here, is sharing records which are already on YouTube. When I find something worth sharing, I always check before making MP3's, and if the record is easily available, I put it aside and choose something else.
But today, I found that I really enjoyed one side of a 45 which is not available elsewhere, even though its flipside is, indeed, on YouTube, so I'm making an exception, which I'm sure I'll do again at some point. 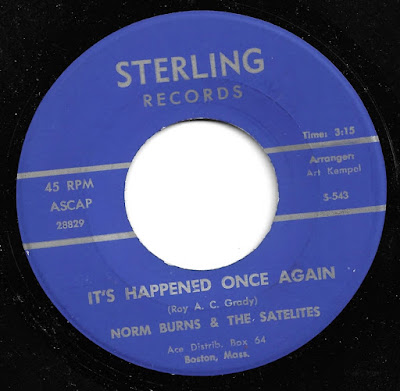 The side in question is by Norm Burns and the Satellites, except it's actually by Norm Burns and the "Satelites", which, spoken in English, might be pronounced "Sait Lights". A quick perusal of  the AS/PMA website shows this to have been the second documented release featuring the Satellites, a group name which would recur many times on the label, so it seems entirely possible to me that someone didn't know how to spell the word, and that shortly after this release, the spelling error was corrected. However, without seeing all of the records, that would be hard to prove.
Anyway, the song in question is "It Happened Once Again", and here we again have Norm in supper club mode, offering up a strong, emotion-laden vocal over midtempo backing. And for the second time in a few weeks, I find myself hearing an almost Rodd Keith-esque backing arrangement, throughout the record, but specifically on the bridge sections, where Norm sings in unison with the backup singers before they offer harmony "oooh's". The lyrics are at least a few steps above the typical song-poem offering, too.

Play: Norm Burns at the Satelites  - It's Happened Once Again

It's the flip side of "Happened" which is on YouTube, and it's a good one, too, "Hey! Hey! Lover". We're in the same key and almost the same tempo here, and yet the song is entirely different. This is punchier, and Norm gives the very different style of lyrics and very different approach. Again, the vocal arrangement (especially the "oh yeahs!") remind me of something Rodd Keith would have done.  The over-the-top reverb is all Sterling, though, and I love it. 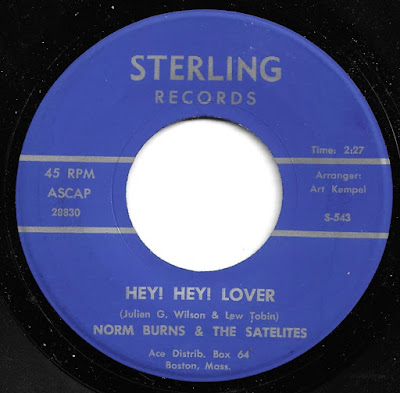 And another cut-up. Again, I encourage occasional readers to look at posts from late January and February for an explanation of what's going on here.

Last time around, I started with a Queen appetizer, a very short pause-button special which got a ton of plays and downloads, so here again, I'll start with another Queen appetizer, another arrangement of the very same song, "We Will Rock You". In this case, I took the sections before and after the vocals and used the pause button to eliminate every other beat. That's what you'll hear in the first 20 seconds here, and it gave the piece a square dance feel that cracks me up. Even the solo sounds like there's a barnyard hoedown going on. For the last ten seconds or so, I rearranged the solo again, using the pause button (on and off) every half beat, giving the solo even more of a square dance feel.

For the main dish, here's something much more obscure, although it was a huge hit in its day (1962). It's the much beloved character actor Walter Brennan and his top five hit, "Old Rivers". A story song always will lend itself to my cut-up style, and if it's spoken word, that works even better. I must have played around with this record at least a half dozen times, during my years of doing cut-ups. If you haven't heard the record, and want to be familiar with it before listening to the cut-up, it is available here.

And again, I'll have to provide the warning that this is not safe for work, due to the inclusion of several off-color words.