The Earnestness and Directness of Early Cinema Records

Howdy!
First up, I'd like to refer back to last week's post. For those who saw it before my friend Stu did, it's worth a look in the comments, as there is a link to a photo of the actual address where the song-poet for the second shared song lived. A second commenter has added details about the property. And what's more, my pal Darryl Bullock (of World's Worst Records fame) has commented on the publishing dates for the two songs, which are, remarkably, from 12 years apart.
Also, a frequent e-mail correspondent, Tyler, pointed out that I was wrong when I said I'd never heard the backing track on the second track before. It is featured in this post, from 2015, as well. Thanks, everyone!
~~
As mentioned last time around, I am now gainfully employed again, and as such, it has been an enormously busy few weeks, and looks to remain so for the near future. I will likely not have the time to be as verbose about what I'm sharing for awhile, which might well be a relief to some readers. So I may be sort of brief at times.
~~
A caveat right up front: this record is beat to hell, and sounds it. 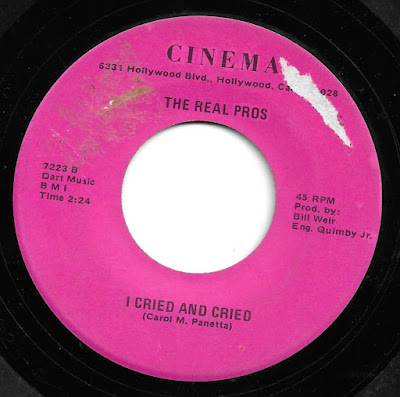 As I've mentioned - probably too many times - I am a big fan of the brief period of the Cinema label (roughly 1971 to some point in 1973) before the standard Preview/MSR people took over as the house band, always credited as "The Real Pros". During that early 24 months or so, many of the releases featured a solo male (whose voice I love) with one of those do it yourself console organs. A few others feature a female singer with an appealing ache in her voice, often with a bit more varied backing than the solo male.
I often find those releases captivating in a particular way that most other song poems and song poem label's work are not. The two singers I refer to have an honesty, earnestness and directness (no doubt amplified by the simple arrangements of the songs) that stands out for me. Like few other song-poem singers, aside from Rodd Keith, they each have the ability to make the song sound like they are singing about their own lives, and that they mean every word.
Today, we have the female singer I've just mentioned. And while I am surely not claiming greatness  here (or anything near it), for even the better of the two tracks - "I Cried and Cried" - I am saying that the singing connects with me, and the homeliness of it, in all of its girl-singing-in-her-living-room-in-1972 glory is very appealing to me. If you're not with me, at the very least, imagine what early '70's Tin Pan Alley, or God help us, what Halmark would have done with this lyric. Cinema did right by this song-poet and her direct, deeply felt lyric.
Download: The Real Pros - I Cried and Cried
Play:

The flip side, "To My Love", also features the warm vocals of the female singer heard above, to considerably less effect, although she still sounds like she means it. The whole thing is padded by about 45 seconds of a tremendously dull instrumental section. Also, while the lyrics are just as earnest as those on the flip, they are also considerably less interesting (to me, at least - maybe amateur lyrics of heartache are just more interesting to me amateur lyrics expressing being happily in love). 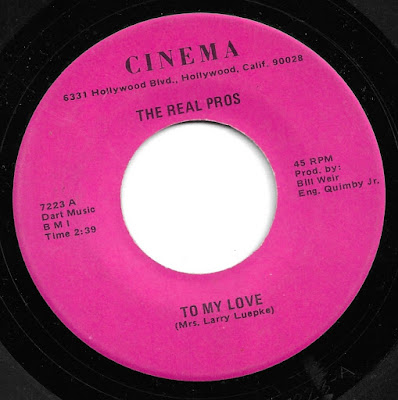 ~~
And now, yet another cut-up. Please see previous posts, going back to late January, for more information as to what I'm talking about.
I have mostly been sharing things I did with a cassette recorder and multiple inputs, back in the period 1981-85, when I was in my early to mid 20's, but today, I have a cut-up I did with considerably better equipment, some twenty years later, in the mid 2000's. It's a nicely reworked version of Buzz-Buzz-Buzz, a terrific - no, absolutely essential - rock and roll record by The Hollywood Flames, from my single favorite year for popular music, 1957. If you haven't heard the song, it would help to know how it sounds before experiencing this cut-up. You can hear it here.
There are a couple of mildly off-color words here but mostly, it's just silly.
Download: The Hollywood Flames - Buzz-Buzz-Buzz (cut-up)
Play:
Posted by Bob Purse at 10:45 AM

Email ThisBlogThis!Share to TwitterShare to FacebookShare to Pinterest
Labels: 1950's, Cinema, Cut-Up's, Song Poem of the Week, The Hollywood Flames, The Real Pros

Hello Bob - never commented before, despite enjoying your presentation of these songs for years now (and to be clear, it's not just the songs, but your presentation of them that is so great for people like me who don't know the song-poem landscape.) Anyhow - "I Cried and Cried" is quite lovely - despite (because of?) the decision not to rhyme the "blue/you" at the end. Made me think (sacrilege!) of the contemporary Stephen Sondheim song, "Losing My Mind," of all things. Its lyrics, on paper, almost sound like song-poem material. Were this still a phenomenon, I would send lyrics of obscure songs like that, and compare the results.