Before getting to today's song-poem EP, I wanted to announce that I've started another blog! With the demise of WFMU's Beware of the Blog, I wanted to have somewhere to continue posting my reel to reel treasures, oddities and ephemera. So I have begun posting to a site I'm calling "Inches-Per-Second", which you can access through the link you just passed by, while reading this paragraph!﻿
And now, it's time for some Stormy Weather! 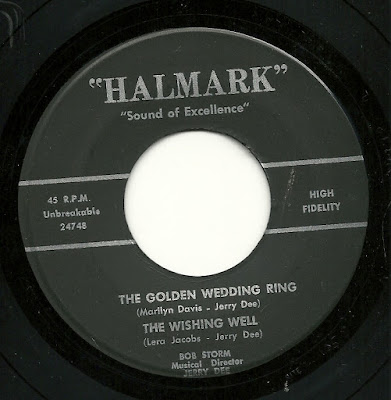 Finding a new (to me) Halmark record is always a potential treat - with the knowledge that it also may turn out to be a stultifying dud. Happily, the first side of this week's EP is anything but a dud, as it features my favorite ridiculously over-the-top baritone, Bob Storm, being ridiculously over the top!

The first song, "The Golden Wedding Ring", actually starts with Storm narrating with a music bed, something I think I've only heard on one or two other song-poem records. Then the song starts, and I actually feel a little twinge of remorse for the writer than they chose the overwrought folks at Halmark, because there are some genuinely affecting moments in the lyrics of this song, about a man losing his wife after many, many years. Someone could have done something decent with this, even if the results still wouldn't have likely been much to my taste. But the generic, tear-jerking background music and Bob Storm's ridiculous performance keep me from being able to take anything about this record seriously in the least. Not that it isn't entertaining - it certainly is! See if you agree:

But the real news on this EP, at least for me, comes in the second track on this EP. For quite a while, beginning around 15 or 16 years ago, my very favorite song-poem was "Lady Off Pedestal at Notre Dame", a Bob Storm special (although, oddly, the record credited Jack Kim, another Halmark singer who sounds nothing like Storm. You can find that track within the many song poems posted here.

One of the many great things about "Lady Off Pedestal" is its ridiculous marching band backing track. And unlike virtually every other track used on any Halmark record, the "Pedestal" track did not seem to be reused and recycled endlessly, not heard again and again on multiple tracks. In fact, I've been unaware of even a second release featuring that wondrous backing. Until now.

Ladies and Gentlemen, I present to you Bob Storm with "The Wishing Well". A few things are clear from this track: First, Halmark had the multi-tracks for this (and other) backing tracks - there are elements on "Pedestal" which are not heard here. Second, the Dolly-O release of "Pedestal" featured a track at least a few generations removed from the original performance - the backing track here is much cleaner and sparkly.

And all of this before you listen to Bob Storm's energetic, bouncy vocal and the idiosyncratic lyrics. The lyricist thoughts bounce back and forth between expressing ongoing love for his lost sweetheart, and a few hopes of her return, and expressing thoughts such as those in this curious couplet:

Of all the song-poems I've heard for the first time this year, this is probably my favorite so far!

The flip side of the EP doesn't exactly offer the wonders of the two songs above. First up is Bob Storm in his less throaty mode, on the song "How Lonely is Lonesome?", sounding oddly (to me) more than a bit more like Rodd Keith (on some of Keith's country offerings). This is among the least Halmark-y tracks I can think of from the label, at least to when the chorus and orchestra swell a few times near the end.

Finally, it's back to the sound of Halmark, with one of their most frequently used backing track serving for the setting of "Hello Baby". This one contains one great verse, to wit:

Clearly, this meant something to the lyricist, as it repeated twice, but I'm missing the meaning, even in the context of the other lines. 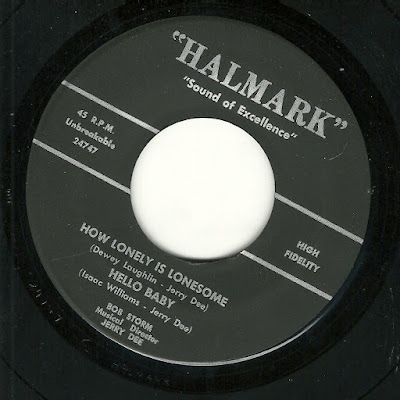 Thanks for posting this Bob. What a gem!

7/2/15:
This is the first chance I had to see your site on my i-pad. Yes, the players work DO work on it!
Now, if I may, since this is probably my first chance also to hear a "non-smarmy" version of Bob Storm, I think it's plain to me that THIS is the guy who sang "Dream On, Dr. King".