Once in a Blue Hill

I'm back after yet another too-long-of-a-break, but again this week, I have a bonus posting, with four song-poems instead of the usual two.

But first, it's time for more updates! I've traveled all the way back to February of 2009, just one month into the song-poem project that is continuing to this day. Keep in mind that, in those days, I was not always sharing label scans, and I was also regularly sharing things which were not song-poem related.

In that month, I posted a Halmark release that someone actually took the time to label as "Horrible", a set of two full singles and a fifth track from Rodd Keith, one pair of oddly named tracks from two different labels, and another pair of favorite - and ridiculous - song poems about a.) squabbling spouses and b.) Nancy Reagan

Also that month, I shared both sides of a truly awful vanity single by one Cal Andrews - a magnificently terrible pair of sides, and a cover version of The Box Tops' classic, "The Letter", which I found on a three inch reel of tape. 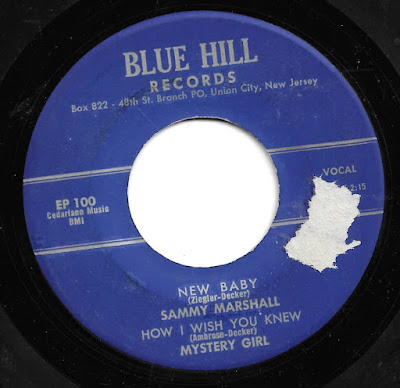 Today's double feature is not two separate singles, as it was a few weeks ago, but four tracks from an EP. And today's EP is from the teeny tiny Blue Hill Records label of Union City, New Jersey, which was likely under the ownership of people named Irving Decker and Mina Zeigler, perhaps among others, including someone with the last name Ambrose. Mr. Decker's name shows up as the song-poet for five of the six known songs on the label, and Ms. Zeigler and the person named Ambrose each co-wrote two of the same six songs.

The other documented Blue Hill release features songs from both the Globe song-poem factory and Lee Hudson's company, but for this EP, all four tracks come from Globe. I'm only really enamored of one of the foursome, but I liked it enough to share the EP, under the theory that I often share singles where there is only one good song, so why not do the same with an EP which has a single good track.

The single kicks off with Globe's most frequent artist, Sammy Marshall. "New Baby", has some things going for it, mostly the goofy take on the old cliché of a father preventing a girl from dating because she's too young, what with the references to "her pappy", and, in the first line, "an apple green suit". On the other hand, the Globe band is on autopilot, and there's nothing remotely interesting about the melody or vocal performance. The dip in the speed and key in the last seconds of this track are on the record - perhaps a moment of tape stretch?

The aforementioned really good track - to my ears, at least - comes next, and it's from the rarely heard from Globe singer who's work was released under the name "The Mystery Girl", or, as in this case, "Mystery Girl". "How I Wish You Knew" grabs me immediately, with a timeless chord progression, straight out of a vaudeville number, bouncy and ingratiating in the best ways possible. The singer offers an appealingly pleading vocal, in a manner I'd enjoy regardless of what she was singing. Then there's a ragtimey piano solo and that suitably vaudevillian ending... ah, what's not to love!

Both tunes on this side are sung by Kris Arden, a fine singer on many Globe releases, who can't help but sputter, given the material she was given to work with. The worst of the two is surely the first one, "It's My Turn". It would seem to me a challenge to create a song with that title worse than the Diana Ross track that carries the same title, but the folks at Globe succeeded. I defy anyone to follow these chords or this melody from start to finish - different members of the band appear to be on different chords at the same moment at least a couple of times.

I'll guess that Kris Arden was sight reading, and hats off to her for staying on pitch, as there are moments when the notes seem to be thrown her way at random, and with little relation to the chords being played.

In comparison, the final track, "I'm Always Yearning For You" is just deadly dull, in a stultifying arrangement, and the surface noise here really becomes distracting, too. 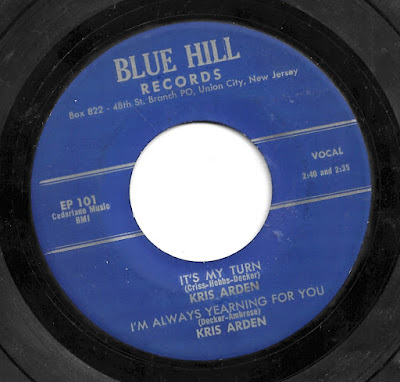 Ah now, I think you're selling the truly awful It's My Turn short. After a few normal bars it just sorta wanders around, aleatory. Makes a fine companion to the amazing Baby Serenade and a bunch of other Globe stuff posted long long ago at Willard's by Perrinyone. And thanks for making me checking out the Kris Arden stuff I hadn't downloaded already.