Guten Tag!!
I know I've gone ages between postings, and as I said in my other blog, work has been overloading my life in recent weeks. I hope to get at least three postings done this month, and look forward to the day when four is the standard again.
I am inching ever closer, though, to completing the project of correcting every single post of this blog, going back to the point where I re-dedicated it to song-poems, in January of 2009. And we're almost there, as this month, I have fixed those posts from March of that same year, 2009.
At that point, in my third month of the project, I wasn't always sharing both sides of the same 45, and also did not always provide scans of the labels of the records I shared. I will go back and fix the lack of labels at some later point, and maybe share some of the flip sides that I skipped in a later post, but for the time being, I just going to fix the file links themselves.
That month, I shared two unrelated records, tying them together with the vaguest of links possible, featured three Real Pros songs from three different 45s, an absolutely wonderful record by "The Enchantments" which may or may not be a song-poem, and a really good record by Bob Newkirk, which, as it turned out, is NOT a song-poem (see the comments to that post).
Now let's hear something I didn't share twelve and a half years ago: 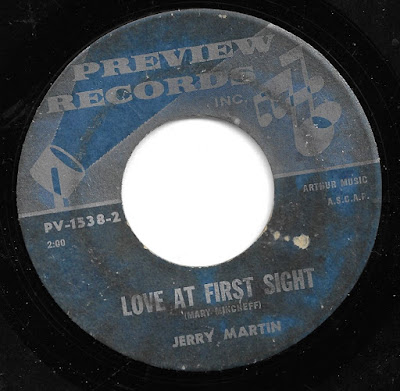 Today's featured song is by everyone's favorite, Jerry Martin. "Um, Who?" I hear you cry!
Actually, as far as is documented as AS/PMA, only one song-poem 45 was ever credited to Jerry Martin, although of course there may have been others that were never captured in the discography. And a quick perusal of the contents of that 45, which is happily in my possession, reveals Jerry Martin to have been none other than..... Rodd Keith.
And Rodd's performance as Jerry Martin, on a song titled "Love At First Sight", turns out to be a countrified offering, a minor pleasure to these ears, aided by some steel guitar, subtle but effective piano, and a vocal which is absent of the condescension one sometimes hears in Rodd's country offerings.
Download: Jerry Martin (Rodd Keith) - Love At First Sight
Play:
The flip side is "The Dream", and it is credited to Dick Mason. I had little doubt that "Dick Mason" would turn out to be the singer best known as Dick Kent, and I was not mistaken. However, I should point out that an unrelated song-poem label, working in 1958, also released a single by Dick Kent, which I shared here, and that 1958 singer was clearly not Dick Kent.
What are the chances of two different labels independently choosing the same pseudonym for two different singers? I don't know, but maybe someone could ask Bobby Boyle or Bobbi Boyle.
Anyway, the song is barely worth writing about - a far below average Preview release with vapid lyrics and cookie cutter arrangement.
Download: Dick Mason (Dick Kent) - The Dream
Play: 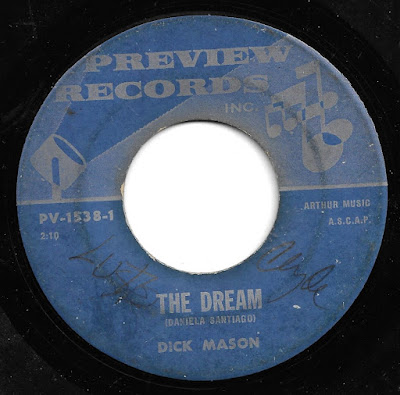 Thanks for posting these! I find the Rodd side just washes over me without leaving any impression. The Dick Mason side, however, is both pleasant and lyrically a howl: "I hold your face in my two hands" sounds more like a horror lyric than a love song!