...And No Women Around to Sing It

Greetings, Song-Poemaniacs!
First, I want to thank everyone for a larger than usual batch of comments, all of them highly appreciated and warmly enjoyed.
And second, I have, as usual, updated another month's worth of old, worn out, broken down posts. In this case, February of 2010.
During that month, I offered up a pre-Valentine's day horror from Halmark, some Yankee Doodling from Rodd Keith, a very early Cinema release, which is one of the worst records I've ever heard, and a ridiculous record written by William Howard Arpaia (but I repeat myself). The comments on that last record turned into a brief, but interesting conversation with a few people who knew Mr. Arpaia, and who contrasted my comments with their memories of the man.
Also that month, I offered up two non-song-poem posts, one featuring a ridiculously awful cover of a Rod Stewart song, and the other a then-update to my expanding collection of records by the wonderful Merigail Moreland. While that post was already redundant in 2010 (the songs posted there had already been on the WFMU site for two years at the time), I thought I'd update it anyway. Both "Oo-Lee, Papa" and "Reputation (1953 version) are well ensconced in the list of my top 40 favorite tracks ever recorded.
By the way, if anyone is still interested in Merigail, I have obtained a later 45 she made, in the early 1960's, one which appears to be even more obscure than her 1960 releases, and will post it if there is interest. 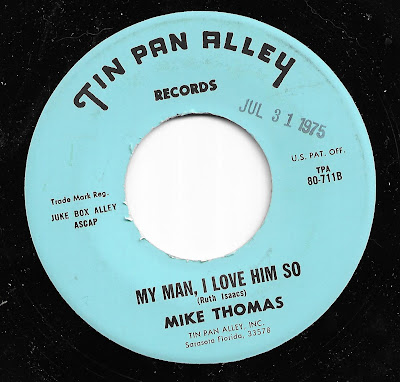 So today, I have something of a mystery, or at the very least, more evidence that low budgets and expediency usually came first in the song-poem game. There is so much to explore here - where to start?

For someone named Rush Isaacs submitted her song-poem lyrics, all about a returning (presumably Vietnam) soldier, in what was almost certainly a first-person style from the point of view of his wife. Certainly, that would seem to be the case from the title, "My Man, I Love Him So".

For one thing, that's not really a title that gets at the heart of her story - that title phrase never appears in the lyrics - but never mind. More importantly, I'd put money on it, that the writer was telling her own, heartfelt story, and something decent probably could have been done with the very simple, but heartfelt, direct and affecting lyrics.

But Tin Pan Alley, at the time, only seems to have had one singer, the mighty Mike Thomas, who, as you might gather, was not, technically speaking, a woman. So okay, they made it a third person lyric instead, about a woman reacting to the changes in her returning military man.

But they kept the original title. The title that's not even in the lyrics, and would have been changed to "Her Man, She Loves Him So", if it had been.

The questions that occur to me:

Why didn't they change the title to something more in line with the lyrics, or at least change it to what I just wrote.

Why didn't they hire a woman to sing this one, or (HORRORS) tell the writer they weren't equipped at the moment to provide a female vocalist.

Why didn't they label the record with the name of a female singer? Mike Thomas often SOUNDED like a woman anyway, and it's not like the song-poet bought so many Tin Pan Alley records that she would have said, "Wait a minute, I know that voice.... THAT'S MIKE THOMAS!!!"

Download: Mike Thomas - My Man, I Love Him So

The flip side, "Ohio's the One", presents a completely different paradox. For here we have some trite lyrics about going home, paired with a sort of oompah beat behind Mike Thomas, who sings it in a gee-shucks country bumpkin style. Then we get to the solo, and while it's far from great, it does seem like the guitarist suddenly thinks he's fronting a blues band, and he at least tries some interesting stuff. I wouldn't call it good, but it is disorienting in a sort of intoxicating way, then we oompah and bumpkin our way back out the last verse door. 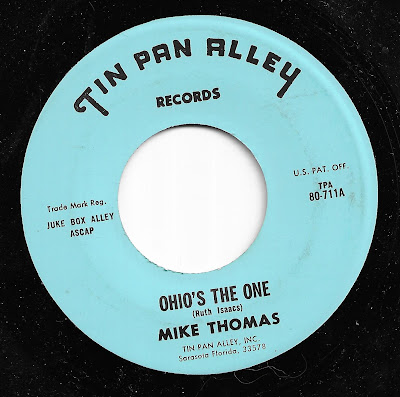 Thanks for posting this! Side A is sort of fascinating in a car-crashy way, with all the weirdness of the title that you mention. Side B, as you said, is pretty blah except for the guitarist, who I wish would use some sort of effect or something on his instrument.