Howdy Doo,
First off, let me just say that I appreciate all of the comments, and I am particularly thankful for Timmy and Bryan, both of whom provided about a half-dozen comments to posts new and old in the last few weeks.
Plus, I am very indebted to another frequent poster and all around good guy, Sammy Reed, who pointed out that, in my zeal to get all of the old posts fixed, I completely skipped October of 2010. No month would be good to skip, but October of 2010 was the worst one to skip of all. For that was the month that I received my very own copy of "What's She Got (That I Ain't Got" by Betty Jayne, and duly posted it. "What's She Got", in retrospect, is very likely not a song poem, or even a vanity record, but probably was an attempt at a legitimate hit. But it involved people, particularly the songwriter, who did use the song-poem companies quite a bit, and it's one of my half dozen favorite singles - by anyone - of all time. Even the flip side in great. Both sides would land in my top 300 - But "What's She Got" would be in my top 20 tracks of all time, if not higher. It is incomparable. It's a record I could listen to - and write about - all day. But I won't. You can find that post here.
Thanks, Sammy. Y'all should check out his site, and and particularly his posting - in response to one of my own - of a George Liberace Songsmiths record. That can be found here.
The rest of October, 2010, wasn't bad either. It featured a truly outstandingly ridiculous Tin Pan Alley release, three mind-numbing tracks from a song-poem album on the Brea label, and a rare vocal offering from Fable/Film City head honcho Sandy Stanton.
That's all in the past, though. Let's spin on up to the present, and see what's tops: 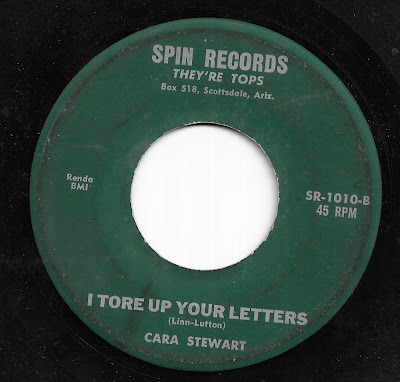 I always enjoy having a Cara Stewart 45 to share. As I've said many times, they tend to exist in just a couple of settings, but what lovely and charming settings they are, and Cara's vocals run rings around any other distaff song-poem singers, and most of the legit ones, too.
The first song here is absolutely standard issue for Cara, which makes it utterly listenable, if interchangeable, with several others. It's called "I Ture Up Your Letters".
Download: Cara Stewart - I Tore Up Your Letters
Play:
Having mentioned that Cara pretty much always sounds the same, I will now ask if anyone hears, in the opening minute of "Just Keep My Love", not the sultry, knowing Cara we've all come to know and perhaps love, but a coy, almost coquettish vocal. To me, at least, she sounds a bit different here. Somewhere along the line, around the minute mark perhaps, her more typical delivery returns.
That's what I hear, anyway.
Download: Cara Stewart - Just Keep My Love
Play: 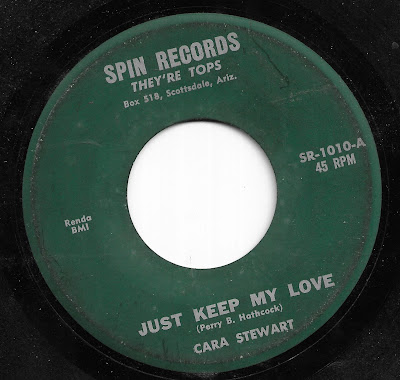 Thanks Bob,how amazing was Carla? Her voice on this and other Song Poem records just sound so warm and 'analog'

Hi Bob -
I just discovered you via an old post on wfmu. You have a fantastic collection of recordings and I'm so glad that you've decided to share them with the world. If you don't mind my asking - Do you ever sell pieces of your collection? There is an obscure propaganda recording called "Education and Indoctrination" by Publius that I've been dying to get my hands on.