Happy Mother's Day to all of you Mothers and everyone who has ever even spoke to a Mother!

Today, I have again updated a month from this site's past history, in this case, June of 2010.

Posts corrected from that month include a record paying tribute both to John F. Kennedy and to Kennedy's focus on Physical Fitness, a Brosh label release capturing two songs each from the Globe and the Halmark song-poem factories, a release on the tiny Arco label, with two singles, primarily featuring Joe Noto and Phyllis Ruby (including an all time favorite song-poem of mine, "My Lover",  and an insane - one might say "bananas" - Gene Marshall record about... Bananas.

I also wrote a short post linking everyone to a large post I'd done at WFMU that month, all about the Fable Label.

Oh, and that was the month I turned 50 years old. I observed that occasion by posting a lot of my old material. Quite a bit of that posting has been duplicated since then by my having put two entire albums online (in fact, it was this posting that led to me having the opportunity to post my "Many Moods" album online), but I thought I'd fix the post anyway - some of the material there is unavailable anywhere else. . 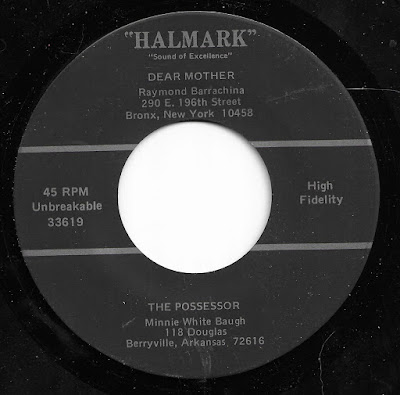 I wanted to make sure to do something for Mother's Day, so I went through my singles, and whattaya know, the first four potential "Mother" songs were all on Halmark 45's. Two of them stuck out as particularly worth sharing, and I put the other one aside for next year.

"Dear Mother" is a pretty typical "my mother is a saint" song-poem, but I found it interesting primarily because it features a backing track that I don't recall hearing on a Halmark label (although I may very well be corrected), and it's a bit different than than a lot of the tracks they recycled so much.  Also, that's certainly not Bob Storm singing, and I don't think that's Jack Kim either, so I don't know who it might be.

I hope the song-poet's mother enjoyed it.

Up next is "The Possessor", and it's another one of those "yes, we get it, you're Christian" lyrics sort of lyrics, albeit one with a few more esoteric lyrics than usual. It's set to one of my favorite, completely over-the-top Halmark backing track, one which was behind a track on the first song poem record I (unknowingly) ever heard.

Side two kicks off with another backing track which was on the first song-poem record I ever heard. And if Mom got a happy tribute on the other side, Dad gets a sad story here. The song is called "Daddy's Gone For Good", and one thing that will be hammered into your brain by the time you're done listening to it is that, well.... Daddy's Gone For Good.

I do like the fact that this particularly song-poet seems to think that heaven is literally in the sky - like somewhere hidden in the Milky Way. I suppose that's not a rare belief, but you don't often hear it phrased that way in song.

The final track has the unwieldy (to my ears) title of "Unhappy Ends", and that's not a title that is obvious from the often even more unwieldy lyrics. He's really hoping for a reunification, but that title doesn't really indicate he thinks it's going to happen. The sudden fade out heard here is how the record ends.

I don't see a search box on this site. How do I find individual recordings?

It doesn't show up on my phone, but it does on my computer.

Hi,
As Sammy said, it's on the version which pops up on a computer, in the far upper left corner. There is also a list running down the right side of every category anything has been posted in, but again, this is only visible on a regular computer, I guess. If there's something in particular you're looking for, just ask, maybe I can find it easier.

I JUST found out that the search box DOES show up if you click "View web version" which is just under the comments! It's in the VERY top left-hand corner.