A Fascinating Piece of Song-Poem History

Well, the delay - and the near weeklong illness I encountered that led to it (happily, not that thing that's going around) - is over, and I have something truly unusual today. But first, another list of updates, in this case to the posts of August, 2010.

That month, I offered a Bob Storm special on Halmark (with some very funny text, if I do say so myself), a favorite Rodd Keith production featuring Suzie Smith, some typical Sammy Marshall, and a truly catchy number from Norm Burns.

And now, here's an obscure disc that has all sorts of song-poem history behind it: 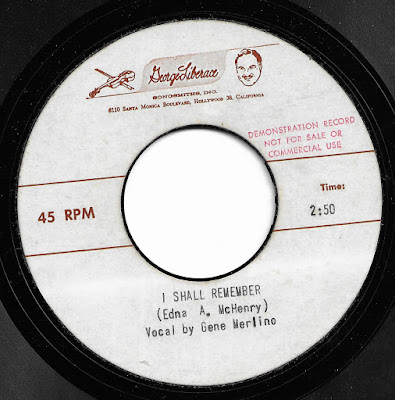 I was very excited to get this record a couple of weeks ago. I've always found records on the George Liberace Songsmith's label to be deeply odd, out of time and as different from the general song-poem world as are Noval, Halmark and Star-Crest. And when I saw the artist name, I was sold on getting this disc. For as many of you likely know, Gene Merlino is the real name of the song-poem stalwart who goes by Gene Marshall, among several other names.

As far as I can tell, this is the only known case of Merlino being billed on a song-poem under his real name (although he used it throughout his career on hundreds of legitimate releases). And although Liberace's company eventually went into partnership with MSR, Gene barely ever worked for that company (one known release), so this likely predates their mid '60's partnership (and therefore, it also would predate his work for Preview). This record - a one sided acetate - likely was made before the persona of "Gene Marshall" (or any of the others), ever existed.

More proof of that is the style in which Gene sings the song. This is not the relaxed, one take pro of his 1970's and 1980's song-poem releases. This is a mannered, altogether more serious (and more pompous) sounding Gene, who I barely even recognize as Gene at first - it becomes clear it's him quickly, but there is an overly staid tone to this that he thankfully lost at some later point.

I wanted to mention here that, nearly 11 years ago, I posted a George Liberace Songsmith's album to the WFMU blog, and my pal Stu commented that the song "Rockin' and Rolling" sounded like it could be sung by "a slightly more mannered Gene Merlino" - a less extreme version of how I'm describing this record. Listening to it again, I am certain that he was right, and that the Gene Merlino, who stylized his vocals in this certain way, at the time of the recording of this acetate, is the same singer on "Rockin' and Rolling".

After all that build-up, I should acknowledge that the song  - "I Shall Remember" - is no great shakes. Getting it's presentation pushed back several days did line it up nicely with Holy Week, which dovetails with the song's subject matter. It's a typical George Liberace arrangement, organ, guitar and violin combo with vocal. But it's another little piece of the song-poem story which hadn't been shared before today.

Eeg, so serious. I suppose you really couldn't lighten up a lyric like this, could you?
Thanks for posting! Another piece of the puzzle.

I do appreciate the lyrics. However, this sounds like it was recorded at an actual church service where the singer was a bit reluctant to take the pulpit and sing this song. I suppose that with enough encouragement, we'll get him to sing, but it won't be his best performance. Amen.

This post inspired me to get my first George Liberace Songsmiths record. I have it on my latest post.
http://strangemusicworld.blogspot.com/2021/04/my-first-george-liberace-songsmiths.html