Turn Me On, Shy Man

Today, I have yet again repaired another month's worth of earlier posts, this time, July of 2010. That month I offered up a couple of truly awful patriotic numbers for the Fourth of July, a Film-Tone EP featuring two tracks worth hearing (a real rarity for that label), a fairly awful Norm Burns attempt at performing soul music, and a Halmark tribute to everyone's favorite megalomaniac, Arthur Godfrey.

Today, I have something fairly fascinating and at the same time truly awful on one side of the record, while the flip side contains something I find engaging and surprisingly well written. But let's start with the car-crash side first. 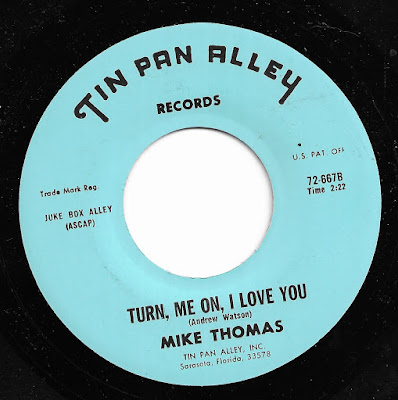 The label is Tin Pan Alley, and the performer is the ubiquitous Mike Thomas. The "song", if you can call it that, is named "Turn Me On, I Love You". And when I purchased this record, some years ago, it came along with a "lead sheet" for the song-writer. Perhaps this was standard practice, but I've only seen a couple of these, and never before or since from Tin Pan Alley.

But here's the thing: The lead sheet doesn't match the song. And I indicates a level of contempt for their customers that I hadn't necessarily seen from Tin Pan Alley before. Even if they assumed that the song-poet couldn't read music anyway, why not still just send an accurate lead sheet - it would have been no more difficult to create than it was to create the fiction you will see below. What's more, the lengthy section notated as "recite" (yes, most of this record is a recitation) indicates that the song-poet wrote additional lyrics that Tin Pan Alley chose not to include in the record they made for him. 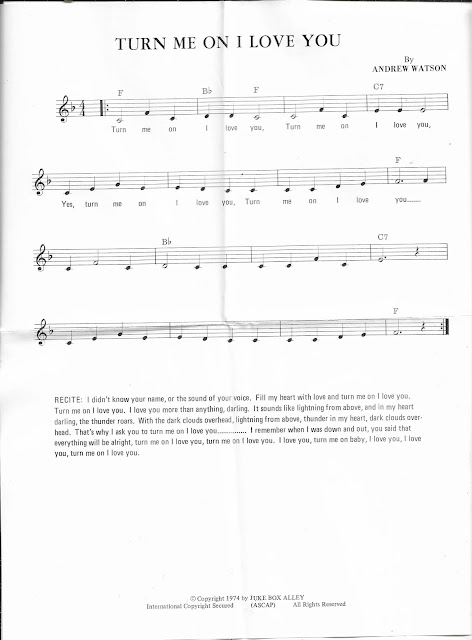 Now granted, there was little good that TPA would have been able to do with this material, but the chords AND the melody do not match the record. Why not?

And on to that record - man, does this suck. I plant most of that on the song-poet - this is among the worst set of lyrics I've ever read or heard. He goes straight from not knowing her name to requesting that she turn him on and that he loves her. And then there's this section, which is somehow hackneyed, redundant, grammatically incorrect, and non-sequitur, in the course of a few words:

That's why I ask you to turn me on I love you.

As I alluded to, the only thing that's a "song" here is the extremely basic chorus. The rest is talkity-talk over riffing.

Anyway, I hope you enjoy "Turn Me On, I Love You" as deeply and as fully as I do.

Download: Mike Thomas - Turn Me On, I Love You

The flip side of this record could not have been a bigger surprise to me. It's called "Shy", and I genuinely found myself being drawn into the lyrics. The music is the standard issue Tin Pan Alley minimalism of the day. But the lyrics are a damn good exploration of what it feels like to want to talk to someone who you find appealing, but being too shy to express yourself. There are some great turns of phrase, describing both the internal feeling as well as the actions of the two people being described.

Mike Thomas, whose vocals can often feel sort of tossed off, actually strikes a really good and effective tone in singing these words. This is one of those records where I feel that the material could have actually been turned into something saleable. Again, see what you think. 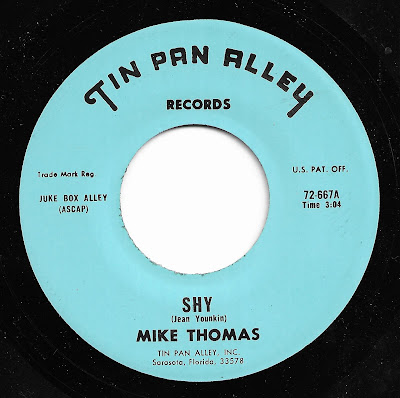 Both of these great songs here turn me on, and I'm not a bit shy about admitting that.

Wow, the b-side is so much better! I'll probably have that weird progression in my head for a while.
Thanks for posting these!