Can You Tell Me How to Get, How to Get to Today Street?

It is really my goal to post here every week, and have at least posted three times a month. This month, due to illness and a few other issues, I'm only getting to two posts.

I have updated/fixed four more posts, in this case, those from February of 2014. These include a bouncy number from Sammy Marshall, a Tin Pan Alley track with some ridiculous drumming, a nice number from Rod Rogers on Film City, and a somewhat offbeat lyric (in the second song offered) by Norm Burns. 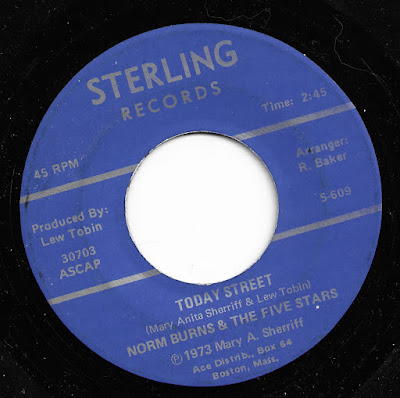 And speaking of Norm Burns: It's always a happy day when I can share a little of his work with the world. Today's offering carries the odd title of "Today Street". It's a bouncy little mid-tempo number which starts with a typical Sterling band sound, and Norm's typically warm vocal. I do wish the lyrics went in a different direction, though, because the track, minus those lyrics, has significant promise, enough to make it share-worthy.

But the title is a metaphor (a fairly ham-fisted one, if you ask me) for everything one might see that was wrong in the world in 1973, and the rest of the lyric promotes the writers solution thereof, which of course is a turn to prayer and religion - specifically, Christianity. Even as a lifelong Christian, which I am, I find this sort of thinking simplistic and fairly ridiculous. Wouldn't a call to action (faith-based or not) be more effective?

The less said about the flip side, "Bring Us Together Again", the better. I just don't think either Sterling or Norm Burns were much good at these slow, love ballad type numbers. The brief guitar solo at 1:57 must have taken hours to work out.

Download: Norm Burns and the Five Stars - Bring Us Together Again
Play: 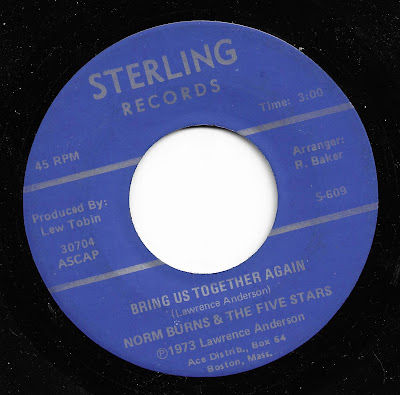 Man. Norm sounds so sad. Especially on that draggy b-side. I also echo what you say about the a-side--nice tune, shame about the lyrics.