Words and Music by "Jim" Stross

I know posting around here has been a little sparse in recent months, and particularly in January, but BOY OH BOY do I have a lot to share today, including eight previously unheard song-poems, all from the same disc.

First up, I am happy to announce that I have been invited to be part of yet another podcast, this one focusing on my own personal 25 favorite song-poem and song-poem related records. This has been in the works for over six months, and the podcaster, Brian Kramp, and I finally did the interview late in January. The podcast can be heard here and here, and if you want to see the list of songs, it can be found here (the list is in reverse order, from 25 up, with a section near the top of a handful of song-poem related discs (which are not actually song poems). It's all explained in the show.

Brian was nice enough to include one of the songs from my recently released album of comic songs, and also to include a cover I performed, live, of one of my favorite song-poem related records, at the end of the show.

Looking over the list, there are some others I might have included - and I've been invited to do a second episode. I think there might be a few replacements in the bottom half of the list, so this is not my absolute top 25, but it's close, and the top 10-12 are unshakable. And as I've mentioned here before, my tastes in song-poems does not necessarily match that of the larger (however large it is) song-poem fandom world - there are, for example, no MSR, Sammy Marshall or Gene Marshall tracks in this top 25, it does reflect that my basic taste in music prefers things from before 1965 in a lot of cases, and a LOT of the fringe of this fringe world is represented.

I hope you'll enjoy it.

Brian has also offered up a multitude of song-poem ads that he's found, since our interview, and I'm going to share those with you, much as I shared a similar collection that was sent to me a few years ago. I don't have a lot of details about them. Here's one from Calgary:

Second, as has been the case for the last several months now, I have fixed yet another month worth of postings, in this case, January of 2014. This was a month I tried out a short lived feature in which I shared song-poems about places, a sort of song-poem travelogue. This includes the earliest known "Real Pros" record, featuring a trip to Napoli, a peppy Rodd Keith trip to Wisconsin, an absolutely wonderful pair of polkas from Cara Stewart, and a soulful vocal from Gene Marshall. I remember deciding to go on that little song-poem road trip, and can hardly believe it was over six years ago!

This completes my postings from 2014, with the exception of a massive post I did upon the occasion of the death of Pete Seeger, which I will have to put back together when I have considerably more time.

To make up for the slow down in postings lately, I thought this would be a good time to share a song poem album. In this case, "album" is a bit of an overstatement, as this is a ten-inch special, containing eight songs and about 24 minutes of music. But it's a unique entry, in that it represents an otherwise unknown label and song-poet. 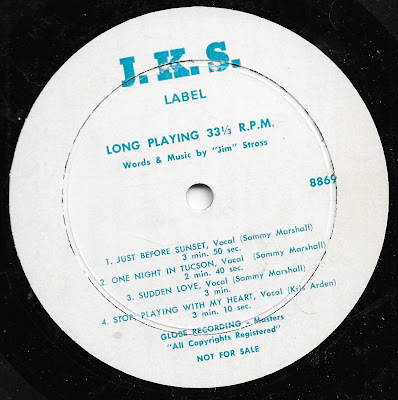 The songwriter - who in this case wrote both the words and music, making this a song-poem/vanity hybrid, is identified as "Jim" Stross, just like that, with quotation marks. He employed the Globe song-poem factory and its stable of singers, providing that key link between vanity project and song-poem release. The label is JKS, presumably Mr. Stross' initials, and the label informs us that the record is "Not For Sale". Don't tell anyone that I bought it on eBay.

The first side contains the following four songs: Just Before Sunset, One Night in Tucson, Sudden Love & Stop Playing With My Heart. The first three are sung by Sammy Marshall, the final one by Kris Arden. They generally have the typical Globe studios sound. I have not separated them out - here is side one:

Side two starts with my favorite of the eight songs, a Sammy Marshall dance special - which are almost always fun - titled "Dip, Flip, Twist, Stomp". This is followed by My One Ambition (which has a co-writer and is sung by Kris Arden), Autumn Rain (sung by Mary Kaye), and Santa Claus Means Christmas (sung by Kris Arden). Enjoy! 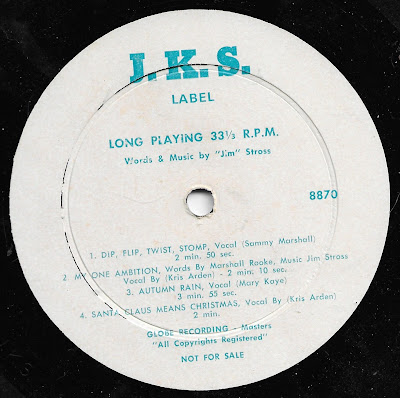 Do you happen to know anything about Mary Kaye? She has an incredible voice.