Trips to the Moon, With Gene Marshall, Part Three

It's almost time to complete our three week trip to the moon with Gene Marshall, but first, I wanted to do a little promotion:

Some of you own, or are aware of my "The Many Moods of Bob" collection, an album of comic songs which I put together in the late '90's, and which went up online on the Happy Puppy label several years later. Well, since that time, I have continued to write and record both comic and serious songs, although a lot more of the former, recording them whenever I had enough time. And now, after 19 years, this 19 track album is available. It's called "A Few More Plans".

There's a wide variety of material - songs set to psychedelic style, calypso, jazz, rhumba, gospel, and much more, all featuring my style of humor and songwriting. Three of them have been featured on the Dr. Demento show in recent years. Mostly, it's me: my voice and my keyboard (and a few other instruments in places), but a few tracks feature family members and a friend.

Mixed in are four instrumentals. One of these - the title track - is a fairly insane trip through sound which wouldn't be out of place as the accompaniment to a silent movie. The other three instrumentals are simply revved up versions of songs I've been playing forever. There's also a remake of a beloved, very obscure commercial (of all things), a remake of a song-poem, and a rendition of a song my brother once dreamed, during a nightmare, more than 50 years ago.

I have been writing and recording songs - serious and decidedly not so - since I was 16 years old, and I believe that, as a set of material, this is by far the best project I've ever produced in those 40-some years, and I would love it if you'd have a listen. It's located here:

You can listen to all the songs for free on the site, and read the lengthy notes attached to each song (under "lyrics" - there was no other way to do it), and if you'd be so kind as to buy it (which allows the download of the material and all the notes and the front and back covers), it's only two dollars.

One more thing: I'm not really on social media, for a variety of reasons, and I would very much like it if  - on the chance that you enjoy the material - you'd consider putting up links to my project on whichever of these sites you are part of. If you choose to do that, I'd really appreciate it.

And here's another announcement: I have re-upped three more posts from around the time that my previous file-hosting site, Divshare, went down for the count. So now, if you'd like, you can once again enjoy and download a truly bizarre Preview release here, a Mother's Day special (with a shout-out to dad, too), here, and a bit of a mystery on Sterling here.

I will continue this project as often as I can. 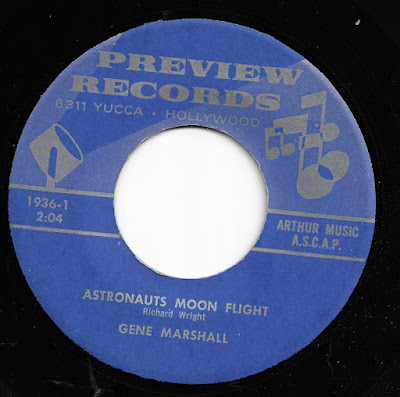 Finally, we're at the final stage of our Moon Shot Trilogy. Some time after last week's tribute to the initial landing on the moon (250 or so label numbers later), here's a patriotic tribute to the brave men who took part in that flight, titled "Astronauts Moon Flight", and again, of course, sung by Gene Marshall.

On the flip side, Gene gets to tackle another piece of history, in this case, via a war ballad, honoring the Battle of "Shiloh", an early major event in the Civil War, 1862. The words are quite respectful, and seem to be acceptably accurate, and Gene handles the song well, although musically, none of this holds my attention. 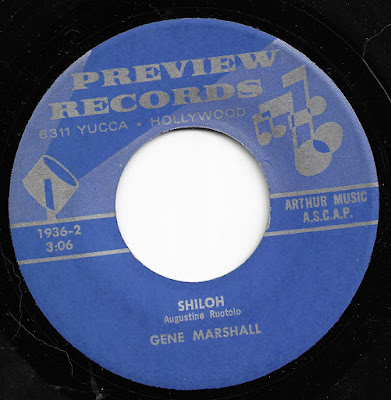 I think Shiloh came in 1862, making the songwriter's claim of remembering it more than a little strange.

Neither song on this record is interesting to me musically but sociologically they're great. Thank you!

7/31/19:
One of those links is to "The Melody of Love" by Victor and the Trophies, which was on my "Wonderful & Obscure Songs of the Past" post.
(https://strangemusicworld.blogspot.com/2018/06/wonderful-obscure-songs-of-past.html)
I have now taken that song off my post, since it's back where it belongs!