Hey, Everybody, Time to Poo-Poo!!!

The first time I saw this label scan, in an eBay auction a few weeks ago, I knew two things: 1.) I was going to buy it no matter the cost and 2.) I was going to share it as soon as I had a chance to hear it. As it turned out, it didn't come close to breaking the bank - not much money at all!! And it arrived Saturday morning while I was at a convention, so this is the closest I could come to "as soon as I had a chance". It did not disappoint. Ladies and gentlemen, I give you the label for Honeywell Jackson's "Ricky﻿ Rocky Poo-Poo-Poo": 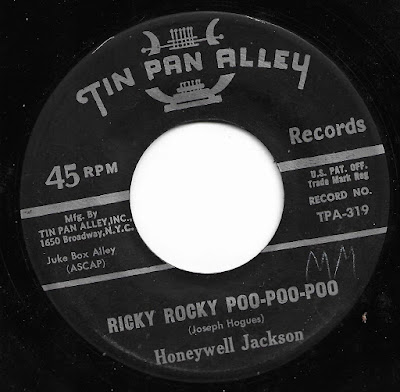 This record is certainly a mystery - Honeywell Jackson does not show up anywhere else in the Tin Pan Alley, or overall song-poem discography﻿. The sleeve it came to me in appears to be original, and is dated 1962, which is fairly consistent with its numbering (early 1963 might also be correct).
And the song turns out to be.... you guessed it.... a song about a dance move! Why, of course. And while most of you could probably imagine a dance move called the Poo-Poo-Poo, this doesn't resemble what I'm guessing you're imagining. There is actually little to it, as you'll hear. The oddest thing about it, besides the title, is that the singer (well, the song-poet) indicates that he does this dance whenever he has a free moment, but then immediately confirms that it's a line dance which requires a leader. Well, which is it - a solo thing or a group dance?
Regardless, there's almost no way a song with this title was going to disappoint. I hope you enjoy it as much as I do:
Download: Honeywell Jackson - Ricky Rocky Poo-Poo-Poo
Play:
The flip side features "The Deans", who show up on only two documented TPA records, making this a truly unusual disc for the label. The singer here - performing "Pretty Lola" - could well be one of the other label male vocalists of the day. The song is a fairly dreary doo-wop styled ballad about a couple of folks with rhyming names who "laughed when they learned" that they had names that rhymed with "cola". I can't imagine that this would have been a surprised, but the writer? Well, he'll "be durned".
Download: The Deans - Pretty Lola
Play: 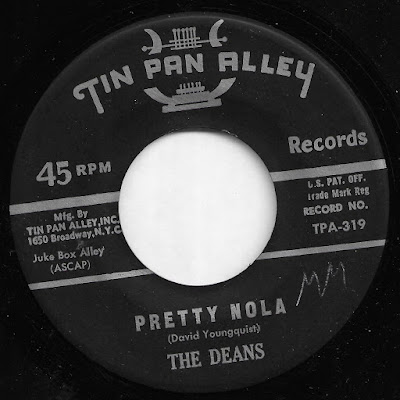 Updates to previously broken links will continue with the next posting.