Phil Is a Beat Off

I have a lovely treat for all of you today. Well, at least, it's a treat for me. It looks like this: 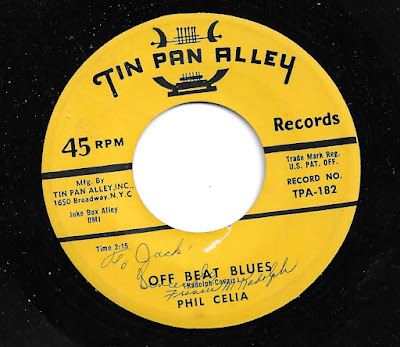 As frequent readers of this site know, I love Calypso - whether the authentic model from the 1930's in Trinidad or the Americanized version from the mid-1950's - more than just about any genre of music that's ever existed. And Tin Pan Alley was active right in the middle of the Calypso boom of 1956-58. And as one of the few labels who actively sought to make their releases sound like the current trends, TPA released several calypso flavored singles during that time period.

That includes today's 1957 model, which not only lifts the Calypso feel, but also makes reference to one of the biggest hits of the previous year, "Blue Suede Shoes". The track is "Off Beat Blues", and it features frequent label warbler Phil Celia doing his best (or perhaps worst) Caribbean accent. Please note that the lyricist for this number - I think it's Francis M. Kadolph - inscribed this copy with a signature and gave it to someone named Jack. I hope Jack enjoyed it as much as I do, as I think it's is wholly wonderful.

The flip side is no slouch, either. In this case, Phil is joined by The Silver Tones, who only turn up on one other documented TPA release (and who are not to be confused with The Silva-Tones). The Silver Tones, presumably, are the chirpy singers who back Phil up here, and who clearly only knew how to sing one wordless phrase. The other TPA release featuring the Silver Tones - titled "Keep On Smiling! Pay Your Taxes!" can be heard here, and as you'll hear, they sing nearly the exact same part on that record! In this case, the guitarist and the pianist play the same chirpy pattern, when the girls aren't singing. Anyway, this is a fun side, as well, even though Phil sometimes seems to be imitating Paul Anka here, something that no one, should ever, ever do. .

Download: Phil Celia and the Silver Tones - Too Late! 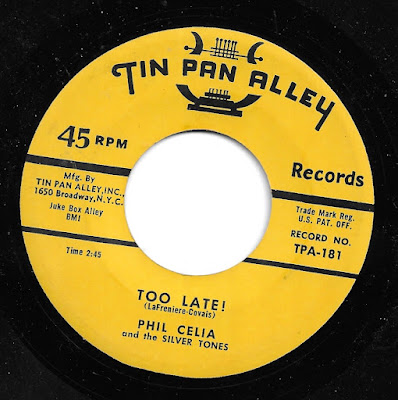 Okay, today, I also have what I think is the last of the mash-ups I made in 2005 - at least the last one which will make sense to those of you out there (I also made a few using parts of Star Ads on top of each other, and using other private recordings that I own).
Anyway, this one was pretty easy. I just took the entirity of The Beatles' "Wild Honey Pie" (well, it's actually Paul McCartney by himself), and added a looping of the drum intro from Adam Ant's "Goody Good Shoes", and labeled it "Two Shoe Pie".
I'm not claiming any greatness or even anything special for this one, but as long as I was digging into the mash-ups, I thought I'd share what I had left.
Download: The Beatles and Adam Ant - Two Shoe Pie (mash-up)
Play:
Posted by Bob Purse at 12:16 PM

Thanks for posting these. I like the sound on these records more than the songs themselves, neither of which seem to develop that much. But the place they're in is nice to hang around a while. The Silver Tones don't seem to be aptly named, do they? Good lyric on side A.