Ah, yes, Beatlefest weekend! First time in three years. I will, as a result, be brief.
But first, I want to thank friend-of-the-site and massive Rodd Keith-head Roaratorio for stopping by and catching up on several posts, leaving interesting comments on about nine of them, chiming in on a few questions, casting doubt on a few tracks I identified as being by Rodd Keith, and even passing along the lucky find, a few years ago, of that Halmark album I posted, for a buck. I'm not going to copy/paste nine comments here, but I appreciate the comments, thoughts and input!
And reviewing those commented-upon posts, I did find that I made a statement, a few months ago, to make a concerted effort to post the remaining Rodd Keith records from my collection, and that, after doing so a few times, I sort of... stopped again. So here is another one which does not previously appear to have been shared anywhere: 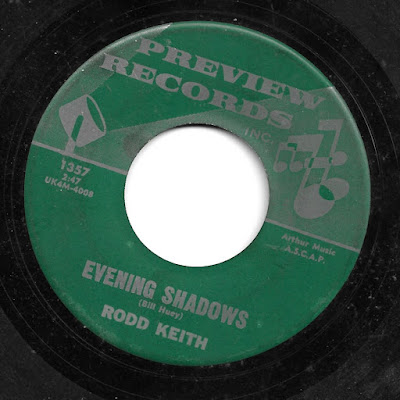 "Evening Shadows" is no great shakes, I suppose. You might even call it Rodd on autopilot, but it's certainly a pleasant enough mid-tempo number. Rodd offers a just-this-side-of-unctuous vocal which is probably what the material called for.

Oh, and at the one minute mark, I'm I the only one who hears "we've been farted" instead of "we've been parted"?

Oddly enough, the flip side of this record contains a backing track that was also featured on the last Rodd Keith record that I shared, albeit without the sax part which is prominent on that version of the track. One thing I really like here - and enjoy any time I hear it on any record - is the sharp intake of breath before the music starts. Here's "We Kissed Goodbye": 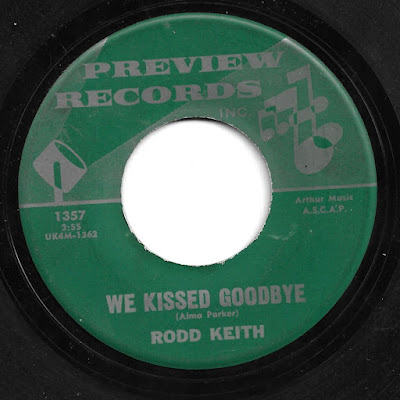 Thanks for posting these! I love the shade of green used on this run of Preview pressings.

The a-side cracked me UP. The lyrics are nearly unsingable and he seems awful worried about being labeled a plagiarist. Good chords and melody.

The b-side kinda dragged on a bit for me...but the sound of ensemble is really nice.

Yes, I heard "farted". Just like some of the old soundalike records of the 70's had somebody singing the "Wrapped up like..." line in "Blinded by the Light".