I have - yet again - updated another month's worth of posts. This time, as it was December of 2010, there were some Christmas releases mixed in. In addition to a rare Delicks label Christmas release (complete with comment at the bottom from the author of the song-poems), and holiday offerings from Mike Thomas and Sammy Marshall, there were also two stellar offerings, one an interesting number from Rodd Keith and the other an incomprehensible number from the Melodiers on Tin Pan Alley.

And speaking of Rodd Keith: 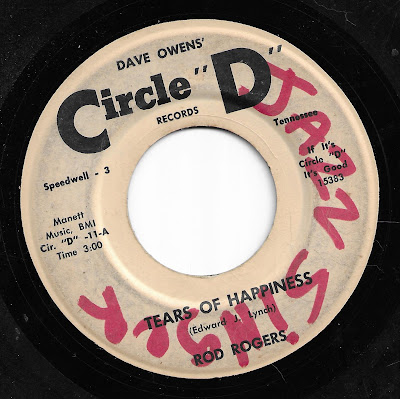 I have two 45's on the label which is named "Dave Owens' Circle 'D'" ("If it's Circle 'D', It's Good"), and previously shared the other of these discs (a Rodd Keith/Sammy Marshall hybrid) four years ago here.
Today I have the other one. And there's a question here for you, my reading and listening audience. Because these tracks aren't really very good - with the exception of one very cool section. But I have a feeling that there are those out there who would prefer that ALL Rodd Keith tracks see release and/or sharing at some point. I don't believe this is true for any other person in the song-poem world. So my question is this - are there those of you who want to hear everything I own by Rodd, even if it's poor to middling, as these tracks are? Or should I self edit more?
Regardless, I think I would have shared this one - "Tears of Happiness" - anyway, because of how much I enjoy a solo section near the end. First, let's note that someone helpfully wrote "Jazz Singer" in large letters around much of the label. I've listened to this track several times, and honestly, that's not what I hear. Not even in the same ballpark. Not even in the same sport. This is Rodd at 3/4s of his most unctuous, and the song seems to go on forever. But then, the magic of the Chamberlin hits at 1:58, and for 23 seconds, I'm in heaven.
Download: Rod Rogers - Tears of Happiness
Play:
From the same musical world - and beat to hell for the first minute or so (and I will soon try again to fix that skip...) - is "I Couldn't Live Without You", but this one doesn't even have the benefit of a very  interesting Chamberlin arrangement. Also, is there a link between his inability to live without her and his not having a dime? I must know!
Time to EMOTE, Rod!:
Download: Rod Rogers - I Couldn't Live Without You
Play: 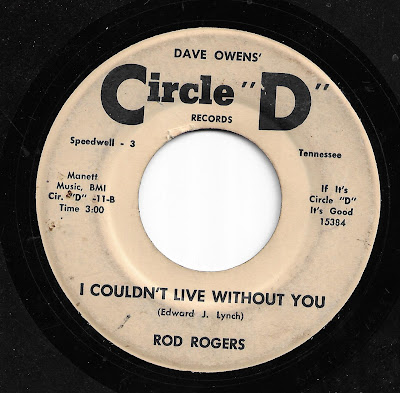 Bob, thanks for posting these!
My opinion is that I'd rather hear records that you think are great, and exciting, than something mediocre by Rodd just because it's by Rodd.
xoxo
Stu

You nailed it on the head about side A; really bland and interminable....until that sweet middle clarinet section! I actually chuckled when Rodd's voice interrupts it by coming back in with the last line of the turnaround.

I actually slightly prefer side b as a song in so much that it has a slightly more interesting melody....if only it had that side A middle section!

As far as Stu's comment above, I say share whatever you want; you've posted lots of stuff you didn't think much of, and that we all ended up liking, or that I personally liked. I posted what I thought was a pretty mediocre Preview single and I got a very enthusiastic comment about it, calling it "a stand alone great". And of course, the officially-released song-poem comps show that some people like stuff that I/you/we find totally disposable. Someone posted a song from "Rodd In Velvet" on YouTube; to me and Roaratorio's ears, "Guess What Mutt" is THE comp-worthy song of that album. But someone else felt differently.

Each record, no matter how lousy, is part of the greater mosaic; the bad ones help calculate the ratio of crap to gold. Hidden away in the backing there might be some clue related to some other record, or label, or performer. It might take years to connect the dots.

Plus: it helps us all save our money. What if a lousy record comes up for sale or auction? Helps me check 'em off the list. I haven't posted any yet, but I have a couple of records I'm definitely going to post under the label: "Don't Waste Your Money On This One".

And when I do that, it wouldn't surprise me if someone comments to say how much they love that record! Which is fine! No accounting for taste, nor should there be! That's one of the best things about this fantastic blog; you give every record a chance to find it's audience....even if it's only an audience of one.

(Of course, when you find a record that you're excited about, it's infectious! They seldom, if ever, disappoint.)

Thanks for posting this! And now if you'll excuse me, I have two other posts to catch up on!

P.S. I shouldn't drop song titles that maybe not everyone has heard yet, I always assume everyone has! So here's the forementioned "Guess What, Mutt?".