Gettin' Down and Dirty With.... The MSR Band?

With today's post, I have completed the corrections to another month, and with that month, January of 2011, another year of the broken post project is finished. I now have only to get to 2010 and 2009 to complete the vast majority of posts at this blog, and virtually all of the song-poem posts, which began in earnest in January of 2009.

Today's corrected posts (one of which contains references to a then-current project of also correcting old, broken links) include a whopping twelve tracks, including a two record posting of Bobbi Blake on MSR, a very late record from Norm Burns on Sterling, an EP featuring the great Rod Barton along with Sammy Marshall, and one of the best 45's ever released by Halmark, with some truly ridiculous lyrics, sung ridiculously by the inimitable Bob Storm. Even if you ignore the other links, I strongly suggest you give that Bob Storm number a try.

Now that that's taken care of, we have this: 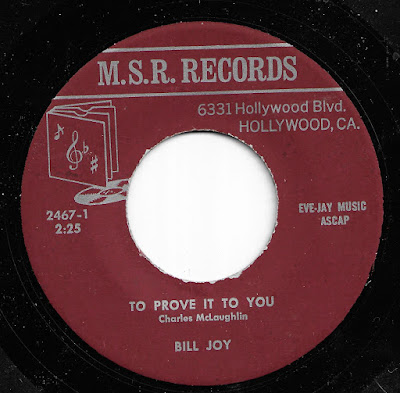 I do not often share MSR releases here - I honestly don't understand how their product became the shorthand name for "song-poem" amongst so many aficionados (i.e. "MSR Madness). I think that generally - and absolutely, after Rodd Keith's death - the backing bands feature what were apparently top of the line studio musicians playing like hacks, with no attempt to hide their disinterest in the material. This doesn't come out as car-crash fascinating or "bad" funny, but simply tedious.
I did, however, get a kick out of "To Prove It To You", by Bill Joy. Bill Joy is the singer on the very first record I ever heard that was identified beforehand as a song-poem (I owned two others, which I one at a record booth at a school fair, all the way back in 1975). That song was "How Long Are You Staying?", and it remains the high point for a singer who otherwise doesn't interest me at all - not at all good, but not entertainingly bad, either.
But I knew this was something special as soon as the song started. For rather than being Bill Joy's typical soulless disco, this is a "bump-and-grind" record, something I thought would have been far beyond the ability of Mr. Joy, or the interest of the MSR band. Right on both counts. This is a entertainingly awful stuff. Whatever the opposite is of "giving it their all".... well, that's what the band is doing - they effectively give the impression of not only never having seen a stripper, but not having any idea of what a stripper might be. And Bill Joy.... well, he wasn't capable of doing anything well, musically, so  he's right at home. The lyrics are nicely, and appropriately vapid to match the music and singing.
Enjoy!
Download: Bill Joy - To Prove It To You
Play:
On the flip side is the aforementioned Bobbi Blake, a much, much better singer, trapped here in a deadly dull - and therefore much worse - flipside song, titled "It's All Over".
As with the A-side, and as with most MSR product of this era, this record is poorly recorded and pressed, leading to terrible sound quality, and the song is innocuous and bland, they seemingly made no attempt to fit the words to a memorable, or at times, even singable melody.
I honestly wish Bobbi Blake had worked with a different crew and company.
Download: Bobbie Blake - It's All Over
Play: 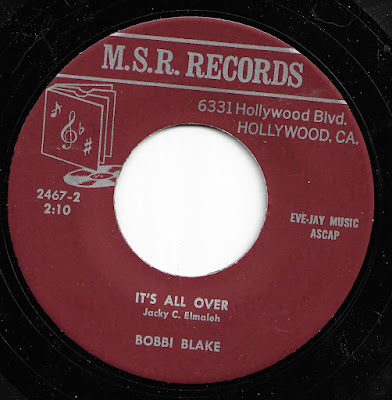 Yeah, Bobbi Blake is a great singer wasted on this material. Bill Joy is...well, maybe isn't a great singer. Unlike you I sort of enjoyed the cut-rate strip-bar ambience of the a-side, but both sets of lyrics are HORRRRRRIBLE.

Poor Bobbi. Or maybe we shouldn't say that; she got paid!