Good day to you all!

First of all, let me know if you have any trouble playing or downloading tracks. Blogger overhauled their interface in the last few weeks, and as of today, I can no longer use their "classic" view, and I fear the new arrangement may have some bugs in it. So far, it's been a fairly irritating experience.

And now, my latest updates - we've reached March of 2012 in my backwards repairing of old posts. In that month, I featured a nice Rod Rogers/Film City platter, a Cara Stewart offering with what I found to be confused lyric, a Sammy Marshall record about twisting, and a double helping of Gene Marshall, two Preview singles in one post, with both featured sides being about the moon. 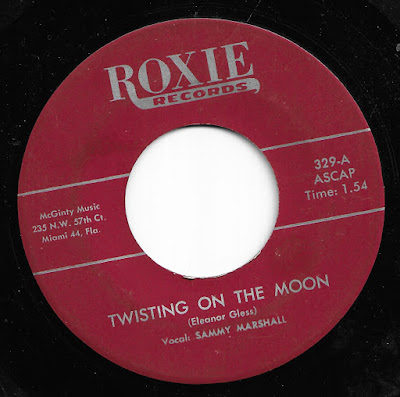 That title may well sound familiar to you. Just over seven years ago, I posted a Rod Rogers version of the exact same song, from a Film City pressing - same words, even the same melody, indicating that song-poet ????? wrote the entire thing. In that Film City posting, I even mentioned that there was a third version of the song, then-currently available to be heard in an eBay posting (alas, no more). I also mentioned the Sammy Marshall version, which I did not own at the time.

But I own it now, and it's time to offer it up. A comparison with the Rod Rogers disc is unfair, as the level of attention to detail, craftsmanship and talent on many records involving Rodd Keith, as well as the typical otherworldliness of the Chamberlin's sounds, make the Rod version the winner almost without listening. But Sammy's version has its own charms, and it's always nice to hear Sammy on an upbeat number, particularly a twist-tacular one.

On the flip side, we have a track which, oddly, sounds more like Lee Hudson's productions than it does the usual Globe product. I don't find much to like in the maudlin "A Boy Like Me Needs a Girl Like You", but the violin is rather nice, and I must say that I do think he shows real vocal talent (which he certainly had) here, particularly near and at the end of the song. 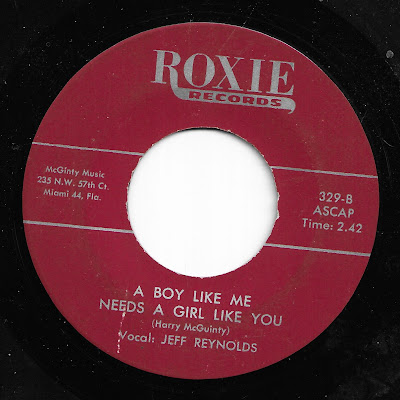