A Not So Standard Father's Day Song-Poem

It's been over two weeks since I posted here, and that's because I have been spending all of my blogging time constructing an enormous post for my other, reel-to-reel tape blog, commemorating my 60th birthday, which was yesterday. It's made up of various recordings I've made from age three right through a couple of years ago, with more than two dozen tracks in all. It is admittedly sort of self-indulgent, but it's a once-in-a-lifetime post, and I wanted to write an "I Was Here" post. If you're interested, you can find the post here.

It was also a bit more work than usual to fix the next old month's worth of posts, as I find that in December of 2012, I posted five times, including two posts containing many more links than usual. In total, the month of December contains a might 19 song-poems, plus a link to ten more at WFMU.

Because it was December, I chose to highlight Christmas songs throughout the month. And so it is that you will find posts featuring Christmas music from the Noval label, from Shelly Stuart (with Norm Burns on the flip), from Sammy Marshall, and an EP from Cara Stewart. Plus, two weeks before Christmas that year, I posted ten Christmas song-poems at WFMU, in a post you can find here. So, for a Christmas Eve post, I shared the flip sides of nine of those ten records (explaining along the way what happened to the tenth one), and that post is here.

For today, I wanted to find something for Father's Day. So I looked through the various possibilities, and most of what I found were songs about dead fathers, except for one which was about talking to father about mother, who just died. Then I came across one where dear old dad is' not really the star of the song, yet is enshrined in the song title. And, as it turns out, the song itself is fairly funny, and goofily clever enough to be a good choice for this site, Father's Day or not. Here's the title: 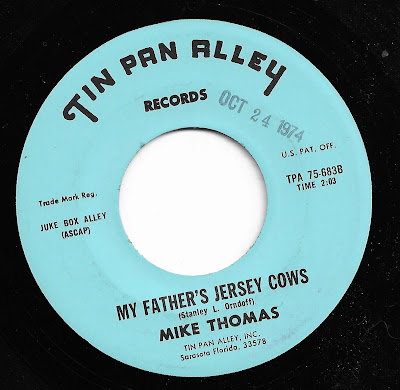 Silly or weird song-poem titles, more often than not, end up attached to disappointingly average or poor song-poems, but that's not the case here. This is a charmingly silly lyric, and the band has some fun creating an appropriate music bed for it. But now, I'm going to shut up now and let you discover its charms.

The flip side, written by the same song-poet, does not have the same pull on me as "Cows", but even here, attached to a unimaginative, slow plod of a beat and band performance, there are some interesting, fairly left-field lyrics for a love song such as "The Dark Side of My Heart". Something better could have been made of this.

Download: Mike Thomas - The Dark Side of My Heart
Play: 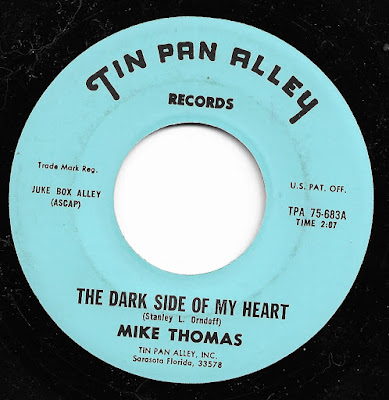 Happy Birthday!
I always enjoy Mike Thomas's offerings,
and here he certainly does his best with
these curious lyrics.

A-side: as someone who has milked a cow, I really
don't want to think that much about what
prompted the songwriter's linking of
strippers and jersey cows....

B-side: Pink Floyd's Dark Side of the Moon came
out in 1973, so the 1974 date stamp on the
record makes sense. The songwriter kind of plays around
with the "Dark Side of" image, trying it on this
phrase and that.

A very entertaining single that put a smile on my face,
which is exactly what we need now.
Thanks again for the work you put into your blog.

Also, I did a Google search on Stanley L. Orndoff, and there
is someone by that name who copyrighted a few unpublished
songs in the 1940's, who had a western Colorado address. If it's
the same person, he would have been around 50 when he arranged
for this record to be made. He passed away in 1998, and the address
listed for his last residence IS on a rural route/state highway,
so his rural credentials are in order.

Wow... Bill, you gave me pause for thought, concerning the comparison of milking cows & strippers. Almost as good as the song featured here. Now, again, I don't think I would have connected Pink Floyd's song with that of Mr. Thomas's rendition here. But perhaps I'm blocking out these sort of secret parallels. Both these songs are good enough for my hall of fame. Many thanx Bob.