I have again updated a month's worth of posts, in this case, November of 2012. These include a Sammy Marshall "special" (with a few comments celebrating the re-election that week of Barack Obama - and weren't those the days?), a happy Rod Rogers record (and a comment on an unexpected death of a family friend) and two different Gene Marshall records - one with an otherworldly instrumental section played by flute quartet (or an imitation thereof), and one specifically shared for that year's Thanksgiving Day. That November was certainly a month of up and down emotions at our house. Can't believe that was almost eight years ago...

Before I get to today's offering, I also wanted to offer up this rather amazing little newspaper clipping, sent along by Brian Kramp: 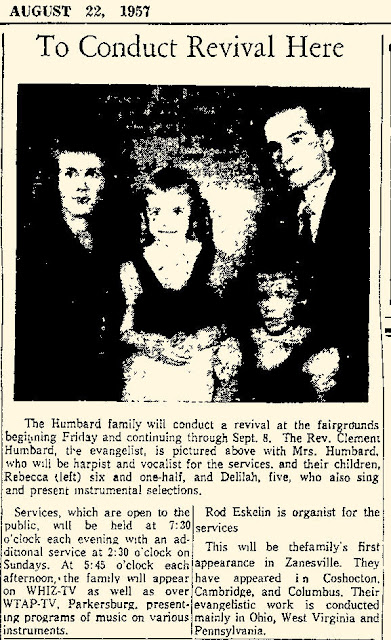 Rod Eskelin, mentioned at the top of the second column, was, of course, Rodd Keith. Thanks, Brian! 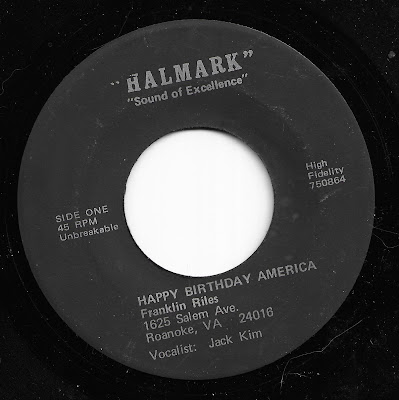 We're just a few hours from heading into July, and towards a rather subdued version of our annual national birthday party, this weekend.

So what better time to offer up a song-poem written for the biggest of national birthday's anyone alive at the time can remember, the Bicentennial. And what better (worse?) label to provide us with a song literally titled "Happy Birthday, America" than Halmark. In this case, they turned to label stalwart Jack Kim - this is one of the relatively few releases on the label where they credit the singer - and then seem to have actually commissioned original music for the lyric, rather than one of them moldy old backing tracks.

I said "original music", but am I the only one that, after hearing the opening "Bicentennial! Bicentennial!", expected to next hear "men have named you", so similar is the opening to the old song "Mona Lisa"....

Beyond that, the song-poet seems to believe that the US has done only three things worth mentioning. One is the winning of many battles on behalf of ourselves and the for the freedom of others. Fair enough. The only other two things worthy of comment, apparently, occurred in quick succession in 1968 and 1969, and while impressive and wonderful, hardly seem like the only things a decent country would have accomplished in 200 years.

All I'm saying is, the song-poet seems to be sort of giving just a bit of short-shrift to America's accomplishments.


A moment ago, I mentioned that it was relatively rare for Halmark to name their singers on the labels of their records. That likely has to do with the designs they favored, the most common of which list just the name and address of the song-poet, confusing and confounding record collectors forever since, at least those unfamiliar with song-poems - they tend to think the listed writer is the singer.

Anyway, perhaps they also shied away from listing the singers because they were so inexplicably bad at it. A remarkable number of Halmark records in my possession which do show a named singer, show the wrong named singer. Most often this is a male singer identified on the label of a record sung by a female singer. But I've also got records where the names of frequent label performers Bob Storm and Jack Kim are mixed up.

Now I've speculated that "Bob Storm" may not even have just been one guy, so different are some of the records released under his name. But people know who Jack Kim is/was - Jack Kimmel was his name, and his voice is very distinctive. I have records with his name on them which are clearly the man identified most often as "Bob Storm", and "Bob Storm" records labeled as being by Jack Kim.

In this case, we have Jack's wife Mary Kimmel, but the label says "Jack Kim.

That was a lot of text with nothing to say about the song. That's because the flip is an uninteresting, unoriginal paean to God, similar to approximately 549 other Halmark releases, and using one of those deadly backing tracks. It's written by the same song-poet as the a-side, and titled "Oh Lord Thou Art Powerful". 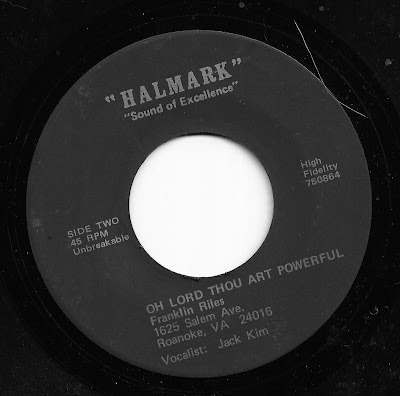 Well, you're right about America's great accomplishments largely being unstated on the a-side. But Jack Kim--what a voice! And at least they used a piano that was 200 years old.

Thanks for posting these!