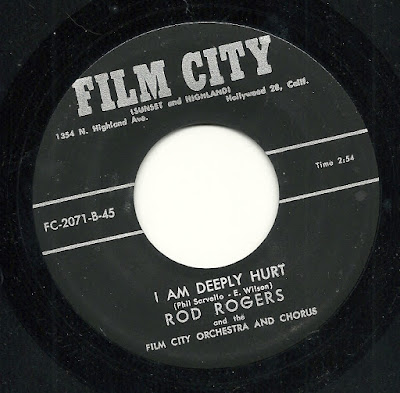 This week, it was my great pleasure to receive an e-mail from perhaps the highest profile correspondent that I've ever heard from, throughout my blogging career. More about that, perhaps, later, but the subject of the e-mail was his love and particular fascination with Rodd Keith's work with the Chamberlin, at Film City records. And so, even though i just recently featured another of Rodd's records from this period, I thought I'd share another one, in response to that writer, his e-mail, and our upcoming phone conversation.

What's more, this record has what may be one of the quintessential titles for a song-poem record - a phrase which captures a frequent thing thought or said about a relationship or an incident, and which is behind a good number of song-poems, yet rarely actually chosen as a title, partly because those phrases are not particularly musical or poetic. My pal Stu's favorite in this "quintessential title" category is "You Insulted Me", as sung by Sammy Marshall (under the name "Ben Tate").

So here's another one. As sung by Rodd Keith (as always for Film City, under the name "Rod Rogers", with his one man band Chamberlin act represented here as "The Film City Orchestra and Chorus", with "I Am Deeply Hurt". It's a shuffle of a beat, with Rodd singing in a supper-club baritone, a pleasant enough diversion, if nowhere near what he was capable, until the truly fabulous last note, which is worth the price of admission.

Download: Rod Rogers with The Film City Orchestra and Chorus - I Am Deeply Hurt
Play:

And speaking of clunky song-titles, on the flip side, we encounter "Please Come Back to Me, Sweetheart", a pretty darn bland number. It's a competent performance, but one with few, if any, of the minor charms of "Deeply Hurt", at least to these ears.

Download: Rod Rogers with The Film City Orchestra and Chorus - Please Come Back to Me, Sweetheart
Play: 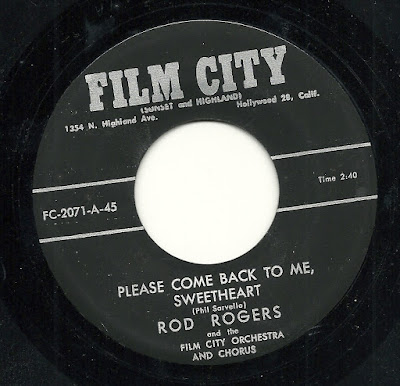 I actually like both sides, the a for its high drama and the b for a fairly nice melody and sweet setting. Bonus for the tambourine, be it real or Chamberlainified...

Great title on the a-side. That might be the best one yet.

Then there's the Norm Burns classic, "Darling, You Make Me Angry".