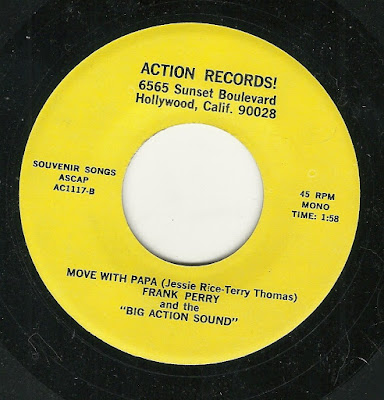 I could have this chronology quite mixed up, but it appears to me that, near the end of his time running the Film City empire, Sandy Stanton began releasing a good number of his factories productions on the newer, Action Records label. Most of the known Action releases seem to have been released after the end of the last few known Film City releases, and essentially feature the same cast of characters, plus and minus a few, frequently accompanied by the ubiquitous Chamberlin.
Today's feature, 'Move with Papa", sung by the occasional Film City/Action warbler known as Frank Perry, is notable for some fun, silly lyrics, and, particularly, the atrocious work done with the Chamberlin: whoever made this track provided a second track of chording which is just slightly - and aggravatingly - out of tune with the rest of the track. The final chord over the rest of the track is a particular howler.
Oh, and while I'd love to think that the co-writer of these tracks was the great English comic actor Terry-Thomas, that seems unlikely.
Download: Frank Perry and the "Big Action Sound" - Move with Papa
Play:
I can't actually work up much to say about the flip side, "Like An Angel So Sweet", which is a fairly typical non-entity from the genre and from this label.
Download: Frank Perry and the "Big Action Sound" - Like An Angel So Sweet
﻿
Play: 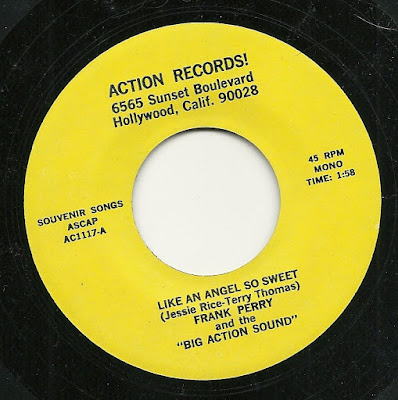 By the way, I do have a plan to try and keep up to a once-a-week posting schedule again, starting this week. Here's hoping!
Posted by Bob Purse at 11:07 AM

Sounds a LOT like Dick Kent to me.
Thanks for posting!