It's always a happy day 'round my place when I become the owner of a previously unknown Noval record. Their records are among the most obscure, and tend to be fairly odd, even within the song poem world. That's above and beyond the fact that they never named a performer on the label, and credited their arrangements to one of a handful of single named men (in this case, "Jay").

"The Capitol of My Heart" is peppier and far less logubrious than the typical Noval release, with a quick beat and a happy sax solo, going along with some downright weird lyrics - my favorite has to be "You're the County Seat of My Love", and the whole thing raps up in just 90 seconds. Here you go!:

The flip side, "A Waltz For You", is much less interesting to me, aside from the genuinely poor lead vocal: 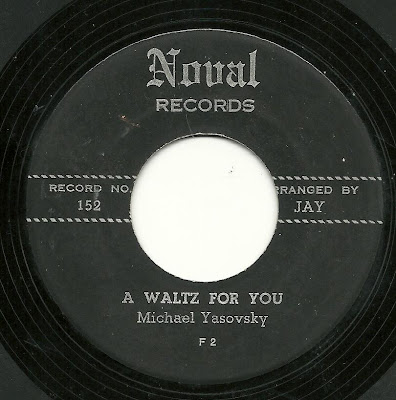 I'm assuming by "capital," Bertha was thinking along the lines of Juneau, Bismarck, or Wheeling...