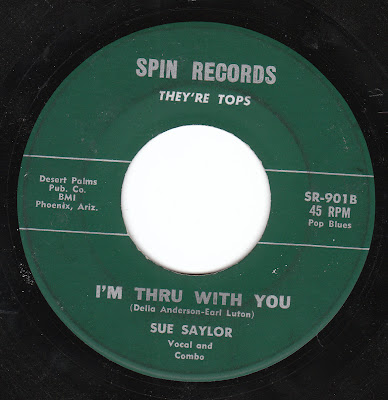 Here's one of a handful of known releases from Spin Records, out of Arizona. For anyone who had doubts about the quality of a Spin release, the label assures all of that "They're Tops". Someone named Earl Luton appears to have been the driving force behind the label - his name shows up as a co-writer on most of the confirmed Spin singles.

And although this record - "I'm Thru With You" - is credited to Sue Saylor (with the Dream Tones also mentioned on the flip side), the singer is clearly Cara Stewart, who released records under her own name on the Spin label, as well, and the production is almost typical for Stewart's partner-in-song-poem, Lee Hudson.

I say "almost" because of the fascinating and fairly bizarre addition of what sounds like a massively slowed down violin providing counterpoint throughout the record. I guess an equally odd guess would be that it's an example of that rarest of things, jazz cello.

The flip side is a religious number, titled "Mansion in the Sky", featuring more of the standard Lee Hudson factory production.

A couple of comments here - first, the record starts just like it's heard here, seemingly a moment late. And second, the section which sounds like it's played off of a damaged piece of recording tape, starting about 25 seconds in, plays that way off of the record! 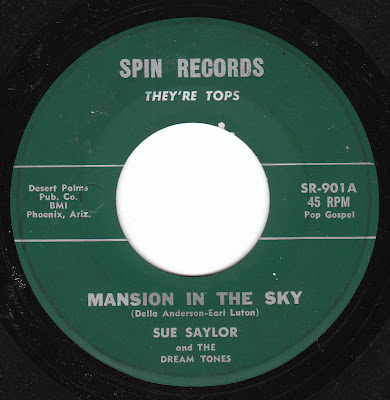 What I like about Cara Stewart is that you never get the impression, from her delivery, that these aren't "real" songs. She just plays it straight in that nice little Peggy Lee way. The a-side is a lot of fun, but I would have ditched that viola or whatever it is.