Before I get to today's seasonally appropriate offering, I wanted to offer a bit of housekeeping. First, I got a couple of responses to my "possibly missing link" post from last time around. Sammy Reed has identified that the pressing is from 1961, and Snoopy offered up a legitimate release from, perhaps, the same singer (see the comments of that post). I'm not sure that calls into question the provenance of the 45 as a song-poem or song-poem adjacent record or not, but I remain interested in what people think about my conjecture, and I welcome those two pieces of information.

I also want to thank both Timmy and Stu for their frequent, and typically very entertaining comments. Please know that I read and appreciate every single comment I receive, and please keep them coming. Apologies to anyone who commented recently who I may have missed, in offering these thanks.

Okay, so today, I thought I'd kick off the winter/Christmas festivities with a song about winter and a song about Christmas, the latter featuring an artist billing found nowhere else in song poem land (although I'm guessing I'll hear from someone - maybe several someones - that she is clearly <this or that> west coast song-poem stalwart). 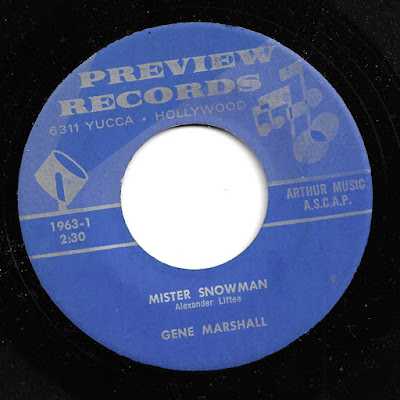 We'll start with the better of the two, a little Gene Marshall special called "Mister Snowman". This one appears to date from 1967, based on the known dates related to similarly numbered Preview releases, but the production, instrumentation and poor production certainly sounds to me like the product that Preview put out in the early '70's. Just one of those song-poem mysteries.

The words are cutesy, but surprisingly effective, at least to me. And I genuinely find some of the melodic turns here to be extremely appealing, particularly what I would call the chorus - the section about him being "a temporary pal". That ran through my head for a few hours after I listened to this song for the first time. A silly little record, but enjoyable. I hope you agree.

I cannot summon up any enthusiasm for the flip side, a bit of treacle called "Santa's Visit", except for the billing. The song is credited to a female singer billed as Terry Stilwell, who shows up nowhere else in the Preview (or in the AS/PMA) discography. I will (as I have before) readily admit that I am not a connoisseur of the women of either Preview or MSR, so maybe this is a commonly recognizable member of that cohort - Bobbi Blake, maybe? (I'm not aware of her working on Preview, or as early as 1967) - anyway, if so, I'm sure there will be several chime-ins. But even so, why the one-time moniker? 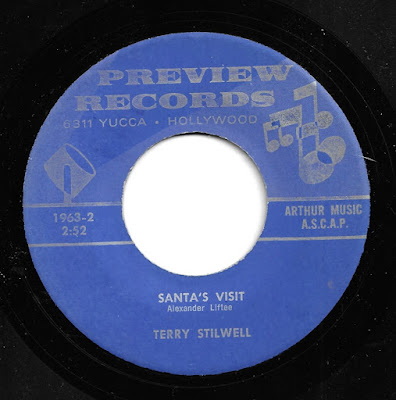 Finally, and most importantly, Cheers, Best Wishes and All My Love to my daughter Molly and her fiancé Sean, who will be getting married on December 10th.

Sammy Reed said...
This comment has been removed by the author.
7:59 PM

1. I thought she sounded like that "My Doll Jane" singer.
2. Going back, I find that her name was Terri Wells.
I think this mystery's toast now.