Howdy, everyone,
I'm always jazzed when I can take ownership of a previously unheard record by my favorite incompetent Tin Pan Alley vocalist, Lance.... er, "Lance", so I rushed this one to my turntable to share it with you. 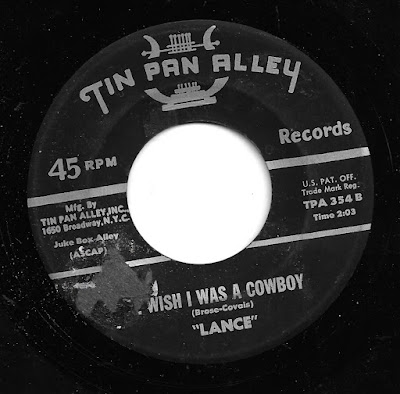 On "I Wish I Was a Cowboy", "Lance" does not disappoint. The song, as written, does not require a lot of vocal talent or versatility, and since "Lance" was lacking in those very qualities, he was perfect for the role of (Yee-Haw) Cowboy Wisher. The folks at Tin Pan Alley apparently thought playing Oompah chords would qualify as cowboy music if someone rubbed some sandpaper together, as was being heard at the time on the occasional Johnny Cash record, among others. It works spectacularly, if you define spectacularly as meaning "not at all".
It rather amazes me that the folks at AS/PMA had access to this record, from the early days of their MP3 offerings, yet didn't see fit to share it.
Download: "Lance" - I Wish I Was a Cowboy
Play:
The reason I know they had this record, is that early on in the days that AS/PMA began sharing MP3's, they DID share the flip side, and it's still available out there in a couple of places. So I broke my rule of not featuring songs already in the song-poem ether because the "Lance" side is so entertaining.
Anyway, my guesses are that they shared the flip side, "I'll Follow" because
A.) it's also incompetent, although to my ears in a far less entertaining way than "Lance"'s performance. This is a group performance of a waltz, which is sung badly out of tune (when it is sung, including the backing vocals), and which quickly moves to the talking that has doomed many a song-poem record. Your mileage may vary, but my response is "boy, that was bad.. and boring", and not "boy that was bad.... and funny!" or "boy that was bad... and entertaining".
B.) perhaps there was also an element of just being amazed that TPA would name the group on the label, "The Silhouettes", given that that was the name of a still active singing group with a not-so-old number one hit to their credit ("Get a Job") at the time of this release. Presumably, trying to get either the buying public or the song-poet to think they were getting that hit group's latest release?
For my money, I don't think there was even a real "group" here. This is the only known billing of "The Silhouettes" on TPA, and the lead singer sounds like Phil Celia on an off day,. My guess is that the song-poet asked for a group, and as there were no groups on TPA at the time, one was created for the moment.
Anyway, this is already out there, but I thought I'd include it for completeness sake. But I think AS/PMA missed a bet by not going with "Lance".
Download: The Silhouettes - I'll Follow
Play: 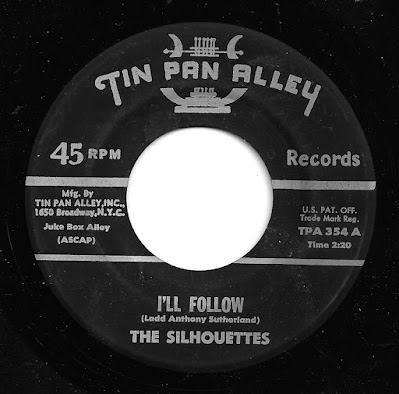 Email ThisBlogThis!Share to TwitterShare to FacebookShare to Pinterest
Labels: Lance, Song Poem of the Week, The Silhouettes

The cowboy song is really weird, musically. It's neither country nor western. It's pseudo Roy Rogers.

The other song sounds nothing like the real Silhouettes. It sounds like a song you would hear in a late 70s piano lounge. This would be the closing, nay, cleanup number. And I laughed out loud at the last note!

I dig the a-side, actually--the lyric and vocal are kinda nifty and fun, and the touch of sandpaper gives authentic weirdness. The b-side is a snooze except for playing the 'spot the blown note.' Thank you for posting them!!

I'll Follow - well, it's got me. I love the stupidity of the words, that repeat until I want to lean on the piano players knuckles. I hate it it. Thanx!