Or Wait.... Maybe THIS Burning Is an Eternal Flame! 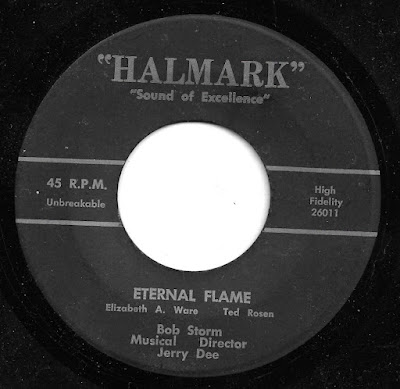 So, I thought to myself... "I haven't featured Halmark for awhile. I should feature a Halmark record".
And within the first four or five I selected to sample, in advance of such a feature, I found I owned one with the exact same title and subject matter as the song I featured in my last post - John F. Kennedy and the "Eternal Flame".
My first comment here is that the "Bob Storm" who is credited on this record is the tinnier, higher pitched vocalist who went by that name. Sorry for everyone who loves the ridiculous, deep voiced Storm.
And the other comment is one which piggy-backs onto a great comment offered up by "Snoopy" to last week's Sammy Marshall JFK record. He wrote, about that song's lyrics, "what an odd lyric for what is supposed to be a solemn dirge, 'They shot him with a rifle; used a telescopic sight.'"
I will see him that observation, and make an observation of my own about another odd lyric in the midst of a solemn dirge, in Bob Storm's JFK tribute, in which he warbles "the life a man gave for the passage of one civil rights bill". (By the way, was that a theory at the time - that Kennedy was killed to stop a civil rights bill? I've not heard that before.)
Your homework for next week is to compare and contrast the Sammy Marshall and Bob Storm JFK tributes, including historical accuracy, musical merit and lyrical and compositional strengths and weakness. You can e-mail me your papers.
Beyond that, please.... Enjoy!
Download: Bob Storm - Eternal Flame
Play:
On the flip side, we have another example of a song-poem lyricist who didn't quite understand the difference between prose and song lyrics - or even the difference between poetry that's meant to be read and song lyrics. How is anyone supposed to make a decent song out of lines like "A Paragon of Excellence", or "Rage Ye Cyclones". Not that the folks at Halmark were trying, but even a master composer would probably throw up his or her hands if assigned to do something acceptable with these lyrics.
Download Bob Storm - The Majestic Oak
Play: 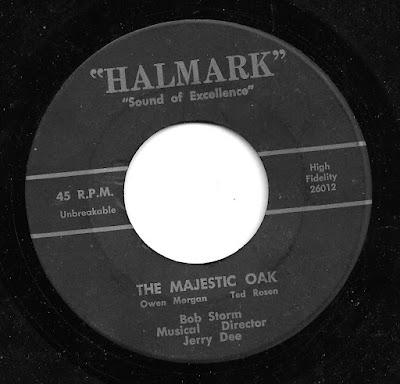 This one wins for most lugubrious.

I agree with Snoopy's comment.
On the song about the Oak, "Bob Storm" sounds like he has a head cold. Nothing could save those lyrics, as you have noted. The JFK song is a little better but, geez, "the firey flame"? Come on.
Thanks for posting! I think this burning is a UTI.

The JFK song, like most of this type, are ill-conceived. But it's better than the other one, in that it's just the song without audio from the funeral taped off TV.

I like the song about the Oak, because it's not a love song. As a songwriter myself, I once challenged myself to write a song about a tree. I wrote one called "Old Maple Tree." But my lyrics weren't this clunky.

Paragon: I could only think of John Paragon, who played Jambi the Genie on Pee-wee's Playhouse. However, even his mystical powers can't save this song. (Apologies to Mr. Reubens.)