Howdy,
This is an intensely busy moment in my work life, but I really want to get a post up this weekend, so I am doing so, but will be uncharacteristically brief. I meant to offer some thanks and links to a few people, but I want to do that right, and I will wait until next time to do so
I have, however, taken the time to repopulate the links on another month's worth of posts, in this case, all the way back to October of 2009. During that month, I posted a song-poem on the Canary label, a nice Rodd Keith confection, a World's Fair related disc from Sammy Marshall, and a personal favorite on the Allstar label. Be sure to read the comments - there was some interesting information about the Canary label (including contact from a relative of the man behind the label), and for the Allstar release, the actual singer of the song posted a response! 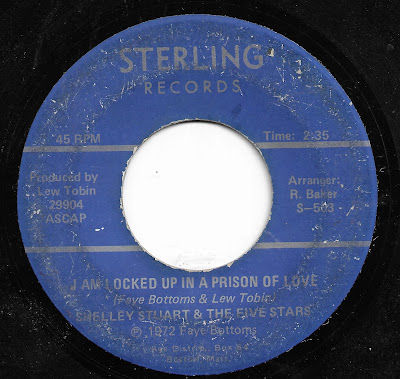 Today, we have Sterling Records' favorite pair of 1960's and early 1970's singers, Shelley Stuart and Norm Burns, one on each side of the 45, helped out by house band "The Five Stars", giving us two songs from the same song-poet, Faye Bottoms. Ms. Bottoms seems to have had a flair for portraying the soap opera type of relationship, as the protagonists heard on each side of this record are dealing with the sturm und drang of a difficult relationship.

Shelley Stuart goes first, with a song whose title tells you exactly how difficult the relationship is going, "I Am Locked Up in a Prison of Love"

Download: Shelley Stuart and The Five Stars - I Am Locked Up in a Prison of Love

Over on the flip side, we have everyone's favorite singer, Norm Burns, who, in this case, is portraying a man who has entered into a relationship with a married woman, and now finds himself in love. Here's "Now It's Too Late Darlin'"

Download: Norm Burns and the Five Stars - Now It's Too Late Darlin' 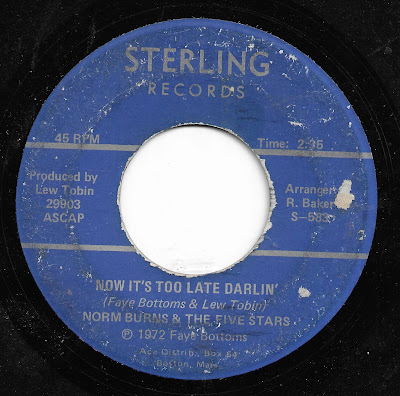 A decent offering this fine day... The votes are all in & it seems as though "Locked Up" wins the big decisive battle!

I must echo Timmy. I also prefer the a-side. Just love the way it sounds, plus it's fairly catchy and Shelley Stuart is a favorite. She always sounds slightly astounded.
Thanks for posting!