A Full Song-Poem Album. On Halmark. Yes, it's a HALMARK ALBUM!

Before I get to the site updates and today's amazing offering, I want to let everyone know that I've again been offered the chance to take part in a podcast, about yet another item from my large collection of recordings.

In this case, it's about the history of, and my history with, an album called "Musical Memories of Camp Bryn Afon", a record made in tiny quantities in 1965, one copy of which I've owned since 1985. It is a deeply obscure choice for this honor, but it is my second favorite album ever.

The podcast is part of the series "Ephemeral", and is the fourth to feature aspects of my collection. This episode can be found here:

I have, as usual, updated yet another month of posts, in this case, October of 2009, a month in which I shared a fantastic and ridiculous Tin Pan Alley bopper, a different Tin Pan Alley record featuring two revealing sets of lyrics, a nice set of tunes from Rodd Keith and a rather insane dance tune from the pen of Norridge Mayhams.

Finally, that month I also created a fun little mash-up, of two recording acts unlikely to have actually worked together, and I shared that in a post to be found here.

The big news this week is that, after a long delay, I am honoring a request from a reader, and posting something that I would guess is exceptionally rare: An album on the Halmark label.

Released in what I believe was the early years of the label - 1969 - it's called "Mercy Drops", and is made up entirely of songs with Christian lyrics, with all twelve songs written by someone named Joe Carmen.

And the Halmark people were already up to their standard tricks, not bothering to hide the fact that they used the same tracks over and over again. One track is featured on a song on each side, and most ridiculously, another track is featured on two songs on the same side (side two). Perhaps they thought the song-poet.

Whatever the explanation, I think it speaks a high level of contempt on the part of Halmark towards their customers, one that I've thought was clear for a long, long time.

A few other oddities here. First, the logo on the record is entirely different from the style they used, and frequently modified, on their 45's, and what's more, it looks enough (to me) like the logo of the real (and enormous) Hallmark Cards company that there could have been a lawsuit, had more than perhaps 20 people ever seen this record.

And second, two singers are credited: Bob Storm and Marshall Young. The songs credited to Bob Storm do not sound like the Bob Storm who is credited on some of the Halmark singles. But Marshall Young - on some tracks he does sound like, and quite clearly IS, the same singer so often identified as Bob Storm on those later records. But I perceive at least three singers here, labeled as these two men. It makes me wonder if "Bob Storm" doesn't exist the way that another label stalwart, "Jack Kim" clearly does or did exist, as we know his real name, Jack Kimmel. Maybe "Bob Storm" was a catchall for more than one singer, and not even clearly delineated as the unctuous over-emoter we all know and love until later.

Halmark is just one mystery after another. 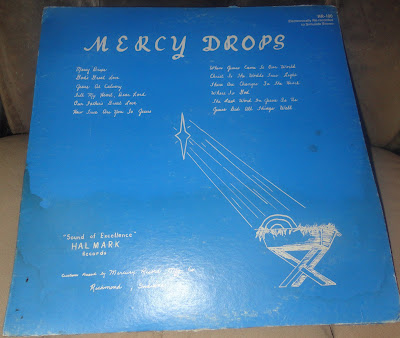 And here's the label on side one. 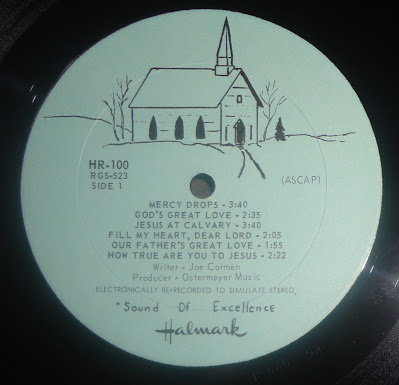 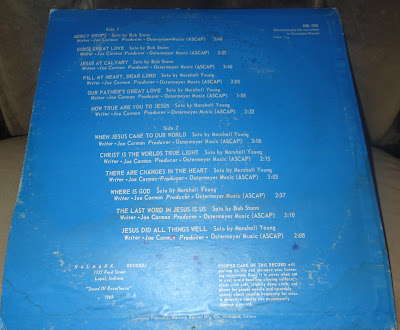 In case you can't make it out, the address of Halmark is listed as being in the small town of Lapel, Indiana (not far, I'm guessing, from Cuff Link, Indiana and Button Down Shirt, Ohio, but quite a ways north of Inseam, Kentucky), and was pressed by a company in Richmond Indiana, both far away from Halmark's actual headquarters in Massachusetts.
Here is the label for side two: 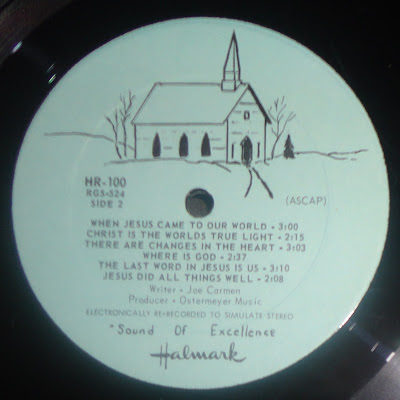 I can't wait to listen to this.
The Halmark logo on the record label just adds another level of, well, sleaze to the feeling you, and I, already get about the company.
Thank you!

Remember that time when Bob Storm was a popular gospel singer?