Rockin' Her, Rollin' Her, Holdin' Her, and I Wonder What Else!

As it so happens - and in a complete coincidence - the next month for me to update, just as the Christmas ads and music start their far-to-early comeback into our lives, was December of 2011, a month when I featured four Christmas themed song-poem 45's. Those I fixed today include records by Cara Stewart, Gene Marshall, Jeff Lawrence (who made very few song-poem records) and Gus Colletti's "Santa is a Superman". I also wrote a post that month, with no music in it, but directing people to my WFMU posting of one of my favorite Christmas albums ever.

We now join our program, already in progress 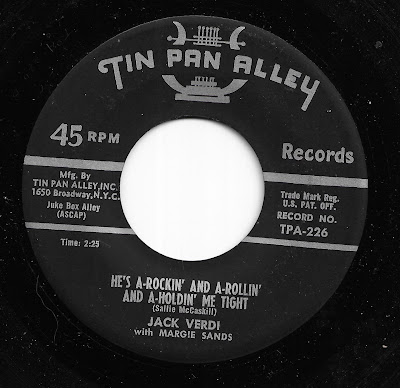 Today, a wonderfully awful, or perhaps awfully wonderful selection from the folks at Tin Pan Alley, circa 1958. During that time period, the TPA folks seemed to have received more comic song poems and/or those with ridiculous titles, than ALL other labels combined. And since TPA, in those days, was more adept than their competitors, at turning out music that sounded at least roughly like the music of the day, the results are often extremely entertaining, as well as being ridiculous.

This one may stretch the bounds of acceptability a tiny bit, from today's lens, in terms of its comic portrayal of a then-frequently stereotyped culture of the day, but boy oh boy, does it make me smile.

The first voice heard is that of Margie Sands, who only turns up on one other documented song-poem record, which I've posted here previously. And the song is half hers, to be sure. But she is essentially the guest artist as far as the listing goes. The credits on the label to "He's A-Rockin' and A-Rollin' and A-Holdin' Me Tight" (!) is "Jack Verdi with Margie Sands". Jack Verdi made only a handful of records for the label himself, one of which I've previously featured.

I'll leave it at that. The charms of this record have to be experienced first hand. Hope you love as much as I do.

For the flip side, "If You Were There", it's Jack Verdi, solo, showing that perhaps he was not at his best on romantic ballads. This record seems to be the result of someone who listened to a bunch of Platters records trying to recreate the same, without any of the necessary skills needed to achieve that level of greatness. 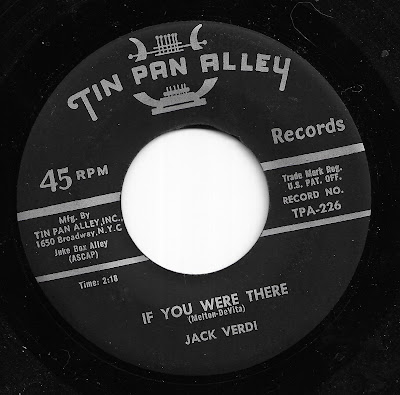 Oh my god. The sax is great, the whole premise of the song is great (a girl getting ready to go out, but the father is not happy about it.....which after seeing the title is a bit of a curveball in classic song-poem tradition.....the Italian-American stereotype is hilarious......it's the 50s, it's Tin Pan Alley.....the stars aligned on this one! Thanks for sharing it with us, love it!

PS: I don't mind the b-side! But even if i did, it's not like MOST b-sides from the 50s/early 60s were any different in terms of quality. This b-side is definitely not exceptional, but it's also not the worst (or blandest) song-poem (or b-side of any genre) I've ever heard. Not by a long shot!

Does he really sing "our loveness" on the b-side, or is he just badly enunciating "love nest"?

The a-side is a lot of fun. Of course it'd have been even more fun if they'd gotten a real 16-year-old girl rather than a grown woman pretending to be a 16-year-old girl. As JW said, the sax is wonderful...I wonder if that's really full speed or if they slowed down the track for the sax overdub.

Great stuff. Thank you as always! This time of year I'm gathering up Christmas songs, so I'm especially happy that some older posts are being updated. I clicked your link to WFMU. The Sacred Heart singers is also one of my favorites. Another click later led me to the defuct link to Once Upon Eternity. Does anyone happen to have that mp3? I'd love to hear it.