Greetings - updates to the old posts will have to wait until next time. It's been a terrifically busy 10 days, and I wanted to at least get a post up... 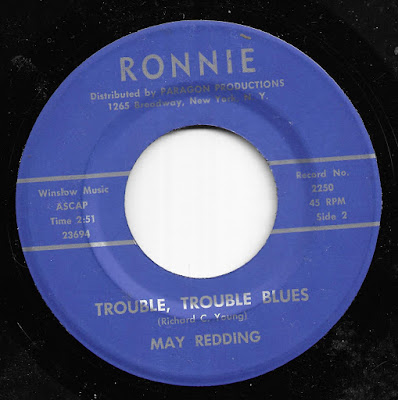 I've rarely featured the Ronnie label here. I find most of their records very bland and samey. I don't know if they were part of the Globe empire - there is some overlap in the quality of that blandness, and Sammy Marshall was the star of both companies. But I discern an even blander sheen on most Ronnie releases than I do Globe.

Which made this record a pleasant surprise. I make no argument for "Trouble, Trouble Blues" (by May Redding) being great, or outstanding in any significant way, but it does have a bit of energy, mostly in the rhythm section, and even sounds a bit like an early Sterling release in certain aspects. Plus, the guitarist tries to actually do something during the solo. Something. All that said, I think it should be at least 20 bpm faster and then there might have been more to work with.

The aforementioned Sammy Marshall shows up on the flip side, in the guise of "Ben Tate", a name he was only billed under on this label, as far as I know (another reason I'm doubtful as to the Globe link).

This one is an out and out car crash, mostly because the bass player seems to think he's playing in a different song entirely. Aside from a couple of hysterical Tin Pan Alley records from the mid '60's, I don't think I've ever heard this many flubs on a song-poem record. I mean, the whole thing blows, but at least waiting for the next flub from the bass is entertaining.

Download: Ben Tate - The Night I Lost My Love
Play: 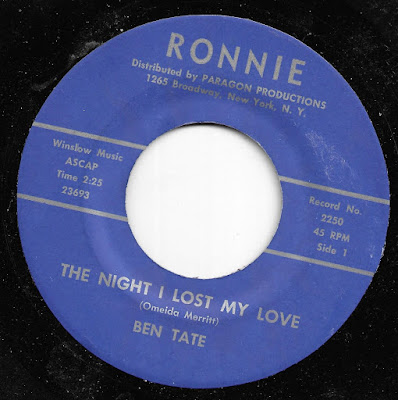 Email ThisBlogThis!Share to TwitterShare to FacebookShare to Pinterest
Labels: May Redding, Ronnie, Sammy Marshall, Song Poem of the Week