First, I Will Serve My Country 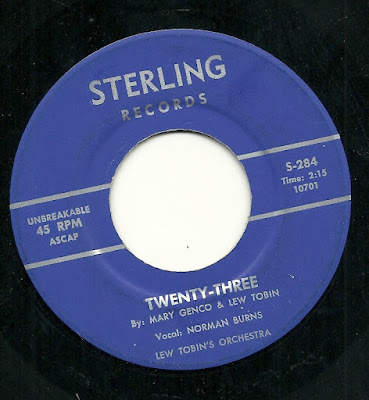 Well, here we are, with a patriotic tune, appropriate for the week, just a few days late for Independence Day. And it's an early effort by Norm Burns and the folks at Sterling records, from that brief period when they were making a few wonderful, early-'60's sounding rock and roll records. The release comes just a few label numbers after the unimpeachable "Darling, Don't Put Your Hand On Me", which may well be my favorite song-poem record, and which you can hear here.

"Twenty-Three" isn't the equal to that masterpiece - and what is? - but it's a solid record in the same genre, clearly cut from the same cloth, with another unique Norm Burns vocal, and a lyric that tells its story effectively enough. Interesting enough, the lyricist here is female, but wrote a song from the point of view of a young man who has been drafted.

On the flip side is a straightforward, sad ballad titled "Lost in Hopes of You". The singer's been gone for awhile, and has learned that, in his absence,  his sweetheart has found another. Since this has the same lyricist as "Twenty-Three", it seems at least possible that writer Mary Genco saw this song as being from the perspective of the same person who was portrayed on the flip side, a few months later. 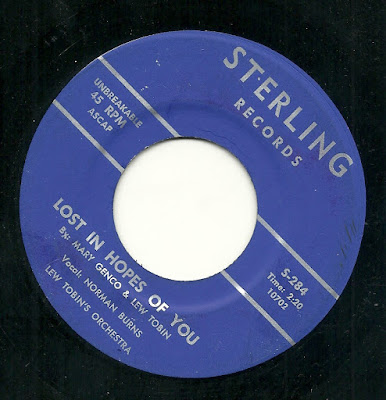 Thanks for posting these! Gee, I like Norm Burns a lot. I'm fascinated that Sterling usually kept 1/2 the songwriting credit, as if these songs ever had chances of creating royalties...

"23" is a top pick, but, the flipper, here is a downer, too hokey. BTW, maybe I'm not understanding something, but why did this guy have to wait for the age of 23, shouldn't he have been tossing this whole idea around in his head at age 18? You know, when he's "old enough to kill, but not for votin'"?