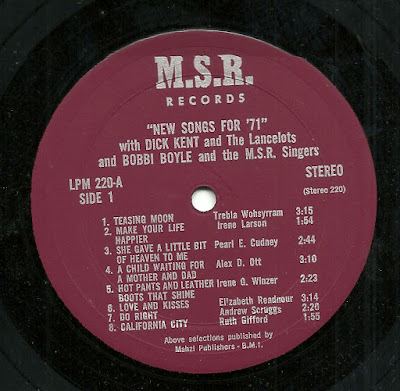 I thought I'd send out something extra special today, especially in light of the fact that I've been sharing more like three "song poems of the week" each month instead of four for most of the year.

So.... here's a FULL album from MSR, titled "New Songs for '71", featuring Dick Kent and the Lancelots on most of the tracks, and Bobbi Boyle (Bobbi Blake, I do believe) and the MSR singers on the remainder.

Just a few notes:
- I believe that "Hot Pants and Leather Boots That Shine" has traveled the song-poem collector  circuit, although I'm not sure. I just know that I'd heard it before getting this album.
- Even though that's the case, it is not, by far, in my estimation, the most interesting track here. The next to last song on side, for example, "Do Right", stood out to me for it's ridiculously simplistic sloganeering, and the final track on side one, "California City" is a marvel, in the way it seems to be wanting to tell a story, but simply repeats the same incomprehensible and pointless anecdote twice.
- The most amazing track here, by far, is on side two, and is called "Forty Going North". I was actually inspired to get up and make sure I still had the same album on the turntable, so different was this from anything else on the album, and indeed, from anything else MSR was doing around this time. Truly an amazing track.

I have not separated out the tracks - they are linked here simply as side one and side two.

Download: Dick Kent and the Lancelots and Bobbi Boyle and the MSR Singers - New Songs for '71, Side One
Play:

Download: Dick Kent and the Lancelots and Bobbi Boyle and the MSR Singers - New Songs for '71, Side Two
Play: 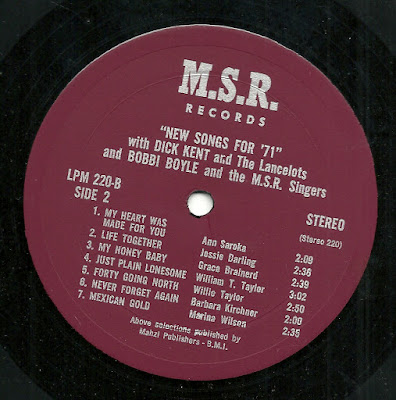 Bobbi Boyle was I'd guess you say the "professional name" used by the singer who became later (and better, to us song-poem fans anyway)-known as Bobbi Blake. From MSR's infancy up to a certain point, her songs went by Bobbi Boyle.

There's a recently-released CD of material from a couple of 60's albums by Bobbi Boyle and the Trio. You can look up some of the stuff from it on YouTube.