As promised, I'm back in a more timely fashion this week, with a very enjoyable little ditty. But first, courtesy of the very adept researcher, Pete, here's yet another song-poem ad, in this case from a 1962 edition of Radio/TV Mirror Magazine:

By the way, "Nordyke", which had been a significant player in the sheet music version of the song-poem scam, had become, by this point, perhaps the most ridiculous of the song-poem outfits, putting out material on the "Film-Tone" and "Star-Crest" labels which sounded like it was from at least 25-30 years earlier than the years those releases actually came out (the early '60's). Search here and at WFMU for either of those labels and you'll hear what I mean. Much more on Nordyke can be found here.
And now.... 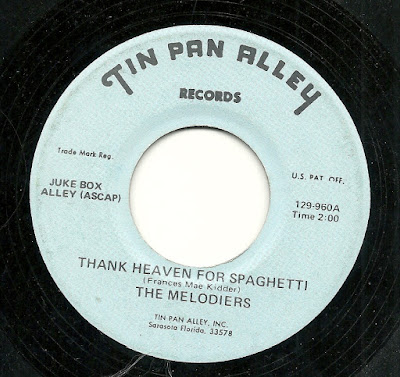 Here's the third entry that I'm sharing from a later-era Tin Pan Alley crew who called themselves (or who Tin Pan Alley called) The Melodiers. The previous two sets of tracks are unfortunately from the time period for which all of my uploads have been lost, but hopefully, someday, I'll make new links for those posts. But this group hasn't let me down yet, having offered up one good side for each of the (now three) 45's. Here they are with yet another winner, a tribute to, of all things, Spaghetti.
I thoroughly enjoy this record. The band is still playing in the minimilist﻿ style favored for years by the label, but they are much more together than usual, and there's something playing along in the background - so softly that I'm not sure what it is - which compliments the guitar nicely. And the singer is taking the silly lyrics completely seriously, which helps a lot. A minor pleasure, to be sure, but still a pleasure.
Download: The Melodiers: Thank Heaven For Spaghetti
Play:
I can't quite work up the same enthusiasm - or indeed, any enthusiasm - for the flip side of the record, "Keep in Touch With Heaven", written by the same song-poet. It's a pretty non-descript mid-tempo number which is fairly uninspired on all counts, particularly near the end when the composer of the music seems to have run out of lyrics to go with the music he'd written, and the singer just stops singing, mid phrase, for several beats.


Download: The Melodiers: Keep In Touch With Heaven
Play: 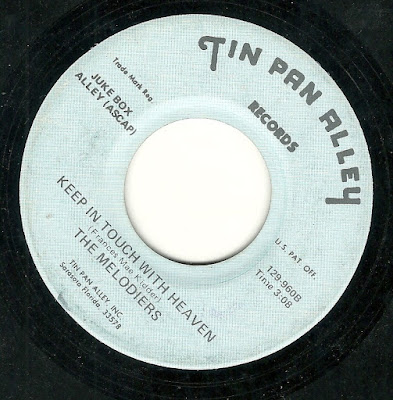 Email ThisBlogThis!Share to TwitterShare to FacebookShare to Pinterest
Labels: Song Poem of the Week, The Melodiers, Tin Pan Alley

I like how this guy is really trying to invest meaning into lyrics about spaghetti.

I love this band's sound, especially "Barbra." Thanks for posting!

Both of these are great - In fact, I could envision Lou Reed becoming intensely inspired by the "Heaven" one.