Back From an Unexpected Break, Or: What the Hell is He Singing About?

So..... I just took the longest break from posting here that I ever have, and did so immediately after saying that posts were about to become more frequent. So what happened, I might (or might not) hear some of you saying?

Well, first it was the CUBS. As you may know (and if you don't, please learn this now), baseball is perhaps the best thing on earth. And the CUBS are the real reason Baseball exists. They are nice enough to let the other 29 teams play (and even let them win almost all the time). But without the CUBS, baseball would be a vast wasteland. And glory be, as you might have heard, if you were paying extra close attention, the CUBS rode the train all the way to the World Series, for the first time in my life, and won the dang thing for the first time in the lifetimes of 99.8 percent of humans currently alive. So that kept me busy. And by the way: YAY!!!!

So I was busy glued to my TV set and radio for a few weeks. Then there was the horrific news of November 8th and 9th, which not only left me not wanting to do much of anything, but came in the midst of preparations for a huge event I was hosting on the 12th. So I would have a busy bee anyway that week, and I postponed my "OH MY GOD" thoughts and reactions, which were primarily on hold until the 13th. So after a week of not wanting to do anything I didn't have to do, I'm back now, and fully intend to provide song-poem wonderment (and, at my other site, amazing finds on reel to reel tape) on my regular schedule, going forward, for an undefined, lengthy bit of time.

First up, another wonderful ad from correspondent Pete, in this case, from TV/Record Mirror Magazine. A handful of acetates have been found on this label, but they were also directly related to the very large (and often wonderful) Sterling label.

Second, I really want to thank those who have been writing and commenting, both over the years, but particularly lately, when there have been nice comments from frequent readers, including (among others) my pal Stu, Sammy Reed (hey, and Sammy - has your e-mail address changed?), Darryl Bullock, and Michael Goodman

But I've also heard from folks who are new to the site, or at least who haven't commented before (or, perhaps recently), and I appreciate all the great feedback, whether it's asking for something in particular, telling me a link isn't working, or letting me know that you've just discovered the site and love it. I'm going to miss some people, for which I apologize, but recently, this group has included Justin, Poucopelo, Drew F., and Rock Smith. I don't usually comment on the site, having no idea if the writer will ever see it, but if your post links to an e-mail address (or a site with an e-mail address), I will respond by e-mail. 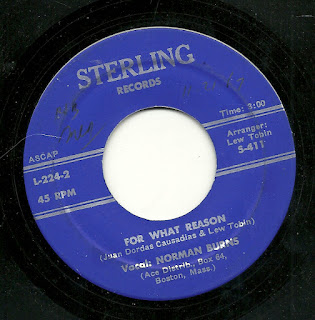 All that said, I have one of those "What the Hell" moments today. And this one is remarkable for a few reasons. While it's certainly possible that there is a lower numbered record in sequence that I'm not personally aware of, this is the lowest-numbered Sterling record I can document to feature Norm Burns, perhaps my favorite song-poem singer. This may well be his very first record, and it seems to date from the mid '60's at the latest.

And he and the folks at Sterling certainly don't sound quite in-synch yet here. This is one of the worst vocals from Norm, in terms of handling the lyrics and following the melody and chords effectively, that I've ever heard. I don't think he had the act "down pat" yet. It does have the feel of several other early Sterling records that I adore, such as "Darling, Don't Put Your Hand On Me", which vies sometimes for my favorite song-poem record of all.

That's all icing on the cake though - just WAIT until you hear this thing. Maybe it's because my head's been foggy with championship followed by tragedy, with severe business mixed into all of that, but I can't make head or tail of what this song-poet was getting at, even after listening to this song nearly a half-dozen times. The song is called "For What Reason", which would seem to beg for a question mark, but none is there. That's okay, my brain created the question marks, larger and larger and more numerous, as I listened to this song.

If you have figured out what he's singing about, please advise.

Not too much I can say that's worth expounding on regarding the rather turgid, cookie cutter religious number, with the clunky title "Keep Your Eyes Stayed on Him":

Download: Norman Burns: Keep Your Eyes Stayed On Him
Play: 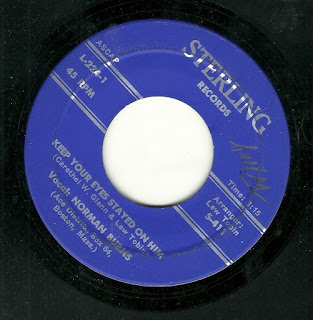 By the way, not that you asked, but the main competition in my heart for the best song-poem ever, to rival "Darling Don't Put Your Hands on Me" is "The Beatle Boys". (And I say that only because I've come to believe that the magnificent and incomparable "What's She Got (That I Ain't Got)" is not a song-poem record at all.)

One might infer that the song's lyricist was not a native speaker of English...

I wonder if this is the band that made the music WL Horning "sang" along to in "Rockin & Rollin'"? (#29 of http://blog.wfmu.org/freeform/2009/07/songpoem-archived-music-volume-6-peace-and-love.html)

Oh - I sent an e-mail to you. Please write back & tell me what you think. Thanks!

Good to have you back posting again.
It always brightens my day to hear your latest finds.
Best wishes from South Texas...