To start, a few responses to comments....

First, thanks to everyone who has been reading and listening - I appreciate your eyes and ears on what I'm sharing here more than I can say. And second, thanks to those who have offered up comments, whether occasionally (or once) or many times.

I've had a few people ask about the years in which one or more of the records I've shared may have been made. Aside from a few facts gleaned from The American Song-Poem Music Archives' labels page, in most cases, I just don't know. The same goes for those who ask about details on particular records they've found - those inquiries have mostly been about Rodd Keith records. If I have an answer, I'll post it - and if you link your comment to an e-mail address, I'll answer you by e-mail - but in most cases, again, i just don't know.

And I really enjoy and appreciate the posted comments which go into some detail regarding the songs posted, similar songs, etc. I don't always have much to add, so I don't always respond, but that doesn't mean they aren't appreciated. And I do know I keep promising to repair the old pages. I really do hope to get to that some time in the next few months. It just seems so daunting... 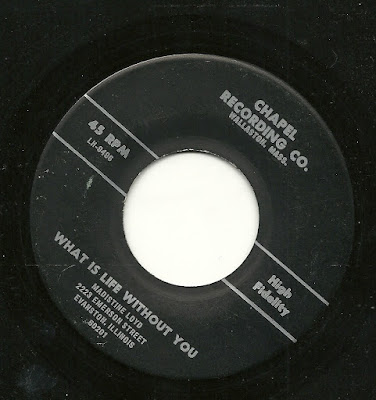 The Chapel Recording Company was part of the same team that brought us the tremendous products of Halmark (aka Hallmark) records. I have no idea if Chapel existed before Halmark or at the same time, but at least some of the time, they used the same decrepit backing tracks that were the hallmark of Halmark. The only other Chapel records I own are acetates, but today, here's an honest to goodness 45, although my preferred side (of the two) sounds worse than many acetates I've heard.

And it's my preferred side because it features everyone's favorite Halmark dude, BOB STORM!!! He's not named on the label, as usual, but it's clearly him. And not only that, it has one of my two favorite Halmark backing tracks - the one most famously used on on "My Hamburger Baby". If you listen closely, I think you can hear some differences between the track, as used here, and as used on "Hamburger", which, if true, would confirm that Halmark owned the multi-track reels for these tracks. To my ears, the final instrumental coda is missing some of the instruments heard on the version used on "Hamburger".

The other remarkable thing about this record, titled "What is Life Without You", is that it is one of the poorest pressings I've ever heard. The surface noise in the opening sections is a mystery - the record is as clean as they come. And the track audibly wobbles. This is not my turntable OR an offcenter pressing - it seems to have come off of the original reel sounding like this. It's truly horrible.

But Bob Storm comes through like a pro, his over-the-top unctuousness never even missing a beat. Enjoy!

Download: No Artist Named: What is Life Without You?
Play:

The flip side features that other label stalwart, Jack Kim (also uncredited), on a tedious (3 1/2 minute long) piece of religious tribute, perfect for those who want to do penitence in Lent, "With Him in Glory"

Download: No Artist Named: With Him in Glory
Play: 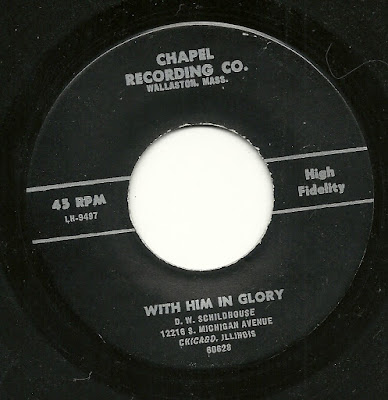 Yuko, I'd rather hear Yoko.