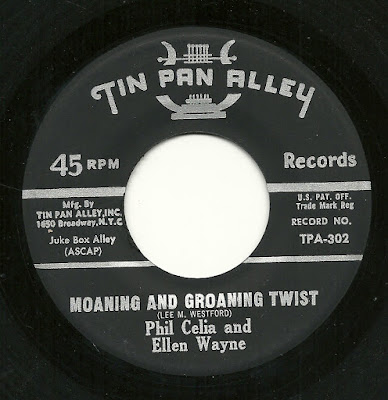 Who among us would find out that there was a song-poem record containing songs titled "Moaning and Groaning Twist" and "Wanted for Murder!" and not fervently hope that at least one of them lived up to the promise of its title? I certainly did, and was happy to obtain a copy to hold in my own little hands.

And both of them turn out to be worth the price of admission, with "Moaning and Groaning Twist" taking the top prize, for my money.

Let's start with the fact that, in barely two minutes, the song features not one, but TWO bass solos! Then, after the first of these solos, singers Phil Celia and Ellen Wayne come in, singing in lovely harmony over a heavily rhythmic track, with some great drumming and a nice (and lengthy) piano break. The lyrics are concerned with some intense twisting which was taking place in New Orleans - Ellen in particular seems to be really feelin' it - and the whole package is just first rate from start to finish.

Phil's got a solo number on the flip side, in "Wanted for Murder!". The lazy beat, and laid back vocal may throw the listener off at first, until you get to the point of the lyric - what it is that the singer is said to have killed, and why. It's not as clever, in my opinion, as I'm guessing that the lyricist thought it was, but it's still good for a smile. 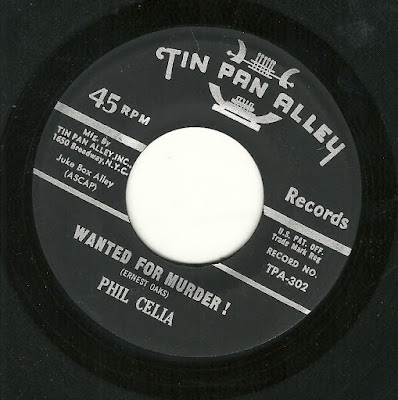 And just as an aside, this record further confirms to me that, if I had been a song-poet in the late '50's or early '60's, Tin Pan Alley would have been the place to submit my lyrics. They received the most interesting lyrics during that period, and did the most interesting things with them.
Posted by Bob Purse at 1:14 PM

Two gigantic HITS! the first one might have the edge, as far as musical performance goes, and the second may have superior lyrics, but both are smashes. BTW, Knees KNOCKIN' on the floor? Yeeeeouwchies!

I like these both. Good singing, decent lyrics, and boppin' arrangements. Thanks!

Lovely old style pop. Definitely a case of lightning in a bottle.

My mother, Lee Westford, wrote the words and music to this crazy song, "The Moaning and Groaning Twist"
She had several other songs she wrote including, "I'm Sorry I Put on Charlie's Shoes"
And several that were a tribute to Johnny Horton~one of her musical idols.
"When the Lights Went Out" and "Five Pointed Star" and many others.
Thanks for sharing this! It was fun to hear it again after all these years.
Of course, back then, it was Elvis and the twist craze that inspired her to write this song. My brother and I were teenagers at the time and we would dance the "Twist".