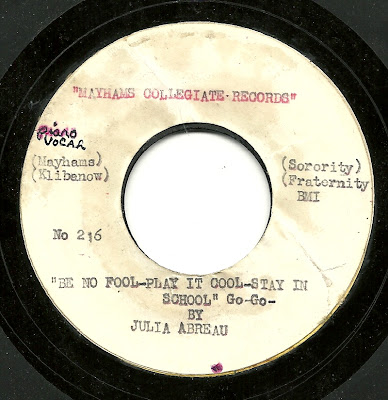 STOP THE PRESSES!!! This is BIG!!! Well, at least is BIG if you love Norridge Mayhams as much as I do.

I've written here about "Norris the Troubadour" before, linked to the great article about him at the AS/PMA website, and even posted my live, cover version performance of his song "Mary Ann McCarthy". What I don't think I ever expected to find was an acetate containing two different versions of a song he later commissioned, during the time he was interacting with various song poem companies.

The song in question is "Be No Fool - Play It Cool - Stay in School", and it appeared on his Mayhams Collegiate label at least four times. All of these may have been the same version, the one sung by Sammy Marshall, credited variously to "Professor Marcel's Collegians", "The Professor" and on Mayham's classic double album, to "Norris The Troubadour Seaboard Coastliners".

However, it's now clear that this wasn't the original rendition. I have managed to take ownership of the aforementioned Mayhams Collegiate Label Acetate, with two performances of "Be No Fool - Play It Cool - Stay in School". Both are performed by the little known Julia Abreau. A trip through the AS/PMA website shows that Ms. Abreau shows up exactly twice - once, on the Air label, doing a song with no known Norridge connection (however, Air was connected to the Globe family of labels, home to Sammy Marshall, so there's that connection), but the other, a record credited to Miss J.M. Abreau, appeared on the "Little Shirley" label, on which she sang two songs by... yes... Norridge Mayhams!

So what do we have here? Well, one side says "Piano Vocal", and the other side says "Organ Vocal". Oh, but that barely scratches the surface of the wonders of this record. Just have a listen to Julia Abreau's vocal performance on the swinging piano side of this record, and tell me this isn't a huge song-poem find:

Well, that was tons of fun, wasn't it? But I bet it scarcely prepared you for the "organ voice" version, in which the organ plays a beat that had me prepared for a version of "Hava Nagila", before Julia Abreau came in, READING the words, as a poem. I love the little asides - "if they're smart that is", and especially, at the end, "best thing for ya, ya know!". To me, this whole version sounds like a weird transmission from an alternate universe, where this is typical of the sounds heard on the radio. Or something. Enjoy!:

(a note - I usually do a small amount of correcting of surface noise, if needed, on the records I post here. In this case, I found that attempting this correction led this record to have a very odd, processed sound, so aside from a few huge "pops", I haven't touched this one, leading to more surface noise than my postings usually have) 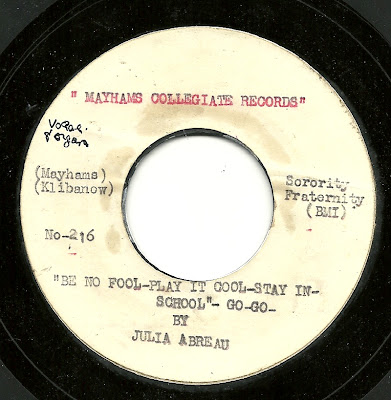 FANTASTIC FIND!!!!! WOW!!! One of my faves!!! Norridge was the best! He lived in a town alot of my family helped build, Hopewell Junction; I asked my 90 year old Aunt Natalie, who's still sharp as a whip, if she ever knew him, sadly she never heard of him! Fantastic! And the "b-side"....holy smokes, Bob, what a find! Made my day! Fantabulous!

Awesome - I'm hugely jealous. Just brilliant and worth every penny of whatever you had to shell out for it. As your previous poster mentioned though although the released version is credited either to Prof Marcell and the Collegians or the Seaboard Coastliners it is indeed by Rodd Keith