Let It All Happen To You!

Happy New Year! It's certainly been an eventful one so far.
Today, I have returned to my fixing of previous posts, and we're now all the way back to July of 2011. In those days, I occasionally posted FIVE times in a month (those were the days), and July was one of those times. So today, I have brought back to life posts featuring: a fairly bizarre lyric sung by Mike Thomas on Tin Pan Alley (that one is an all time favorite of mine), a posting featuring Dwight Duvall and Cara Stewart on the tiny Brosh label, some primo Bob Storm on Halmark.. err, Hallmark, a short and sweet number by Gene Marshall, and an absolutely wonderful entry by Rod (Keith) Rogers on Film City.
And speaking of Rodd Keith... 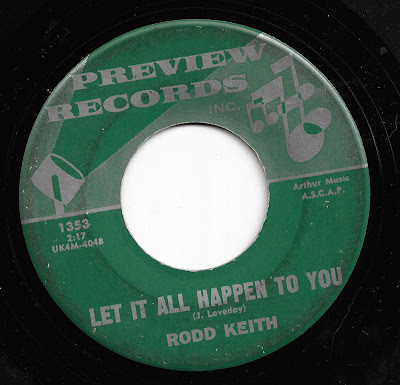 While I watched the playoffs yesterday, I did some straightening up of my 45's, and specifically updated my song-poem collection. The last time I organized my (then) holdings was probably eight years ago, and everything I've accumulated since then has just been tossed into a box at random. So now they're arranged by label and label number, and I came across several promising titles that I'm sure I haven't shared here yet.

One thing I decided to do - since this is a sub-genre that is so highly prized - is to eventually share any and all of my early Rodd-Keith-on-Preview 45's which have neither been anthologized, are on youtube (or whatever) or have previously been shared here. This numbers only a handful, as it turns out, and I'll start this project today, with a country flavored 45, which likely dates from late 1967 or early 1968.

By far the better side, to these ears, is the bouncy "Let It All Happen to You", a sprightly and brief 6/8 time exhortation to living in the moment and being open to whatever happens, with more than a passing reflection of the language of the flower children. I could really do without the chirpy backup singers, but otherwise, this is a cute, if very slight, offering.

Download: Rodd Keith - Let It All Happen to You

We slow down to more of a walking tempo for "Say Goodbye and Go", a heartfelt if not particularly inspired lyric, which seems likely to reflect the writer's reality, as do so many of these breakup, heartache-ridden we hear on song-poem records. The backing is by-the-numbers, but Rodd injects his typically effective emotional vocal, complete with a little sadness breaking up sound on the final word of the record. 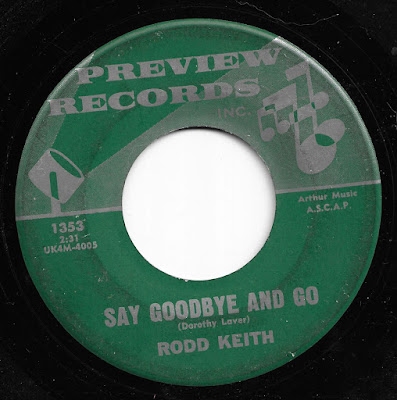 Thanks Bob,I enjoyed listening to this post.As a 'guesstimate' do you know how many records Rodd released on Preview? Cheers!

Thanks for posting these!
I like the a-side pretty well. To me the chirping chorines sound like Nita and Rodd (in vocal 'drag').
The b is just draggy, sad to say.

Hey that's such a fun, cute track and possibly the first country song I've ever heard to feature a bongo on it! Sounds like a happy bongo player (Neda?) Awwwwww, this was cute. Thanks, Bob, I needed that.

B-side isn't as strong, but I've heard way worse (and blander)from both Rodd and song-poem records in general. I was expecting it to be unlistenable, as opposed to just unmemorable. This one at least has some typically nice organ playing and I like his vocal performance and the general sound of the record.

Thanks, Bob! (PS I put up an Inner-Glo record for ya, even though I'm pretty sure you have it already. But what if you don't?!!!)

in reply to Rock: the last known (to me, at least) Rodd-sung track on Preview was "California Law" (under the name Dean Curtis, his last known pseudonym on Preview). (good record, by the way!). It's definitely right before he died. That's Preview 2620. To my ears it appears that most records from the very beginning of the Preview discography up through the records listed around "California Law" are Rodd-affiliated, ie: you can hear him singing back up, his organ playing, his trademark melodica in the later years, mellotron-heavy records, arrangement devices, etc. Gene Merlino did mention in an interview I have that there was someone else in the early 70s who (for a short time) worked on these demo records as a composer and arranger, and Merlino rated him highly; he didn't mention which label it was, and he couldn't remember the person's name. I have a theory about which "era" of records that arranger might have worked on (assuming it was Preview), but suffice to say that it appears like Rodd was the main utility guy for the companies he worked for, and definitely for Preview. It's worth noting that the records that come after Rodd stops appearing as a vocalist immediately sound very different.
Also, you're just asking about Preview, right? There's Film City, MSR, and all the other labels he appeared on. At any rate, it's definitely well over a thousand, and if you told me it was three, or even four thousand different records he appeared on, I wouldn't be surprised. I've curated my own Rodd Keith "boxed set", and it's 312 songs (with him on lead vocal) and another 210 (and counting) for what I call "The Rodd Keith Singers" collection: songs that obviously are his work, but with different lead vocalists . 522 songs in total and that is but a tiny, tiny fraction of just what's listed on ASPMA, much less everything else that might be out there.

Wow thanks JW for such a fascinating reply,I know that 'new' Rodd records continue to appear on line even now in 2021 thanks to Bob and other collectors.